Cape Verde is a small island nation off West Africa. Its location makes it an ideal hub for illegal cocaine smuggling from South America to Europe.

"By the 1990s, Cape Verde had become a hub for fast-growing narcotics traffic, echoing its past importance as a trans-Atlantic staging post for the slave trade, ocean-going steamers and early commercial aviation. Its jagged coastlines and 300,000 square-mile maritime zone resemble a smugglers’ paradise."[1] 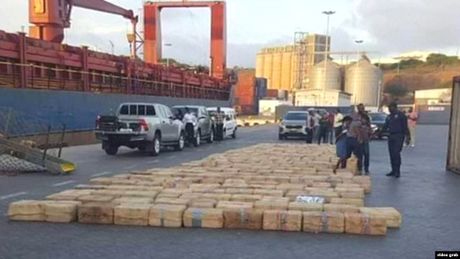 In 2019, 11 Russian sailors were arrested after Cape Verde police found 9.5[2][3][4] or 9.6[5] tons of cocaine after their Panama-flagged vessel docked at the port of Praia for legal reasons following the death of a crew member.[6]

This is reported to have an estimated value of $720 million, or the equivalent of 41 percent of Cape Verde’s annual GDP.[5]