Belarus, officially the Republic of Belarus, is a landlocked country in Eastern Europe. It is bordered by Russia to the northeast, Ukraine to the south, Poland to the west, and Lithuania and Latvia to the northwest. Its capital and most populous city is Minsk. Major economic sectors are service industries and manufacturing. Until the 20th century, different states at various times controlled the lands of modern-day Belarus, including Kievan Rus, the Principality of Polotsk (11th to 14th centuries), the Grand Duchy of Lithuania (ca. 1236–1795), the Polish–Lithuanian Commonwealth (1569–1795), and the Russian Empire (1721–1917).

The Belarusian President Alexander Lukashenko attracted criticism in late March 2020 for refusing to mandate social distancing in the nation state.[1] IMF and World Bank were interested in him changing the response to Covid-19 to more harsher measures.[2][3]

After a widely questioned election that allowed Alexander Lukashenko to serve a sixth term, protest erupted in the country. Some were the biggest clashes in the country’s history.[4][5] The opposition candidate that received considerable publicity and refuge in the EU member state Lithuania,[6] Svetlana Tikhanovskaya, has had the following statement on her website:[7][8]

I repeat, I came into politics not for the sake of power, but for the sake of restoring justice. My main goal: to conduct real, fair elections with the participation of all alternative candidates. By voting for me, you are voting for the restoration of your right to choose power, for new and fair elections. Only in this way will the country be able to develop further. We have teamed up with the teams of Victor Babariko and Valery Tsepkalo, the best experts, parties and public organizations cooperate with us. They offer programs for the development of the country, which can be found at reformby.com. We have created a strong team for the common goal of building a new Belarus. Let's do it together! To win, you and I must act as one big team.

The "programs for the development of the country" by Victor Babariko and Valery Tsepkalo focus under "National security sector reform" at reformby.com on:[9][10][11]

The document uses terminology that is translated into: "Civil society", which in English is a customary term for American think tanks and foundations; this indicates a US sponsored regime change operation.[12]

In August/September 2020 transatlantic think tanks like the Atlantic Council and CEPA started to hire a number of journalists and (PHD) researchers from the region.[13][14][15][16] 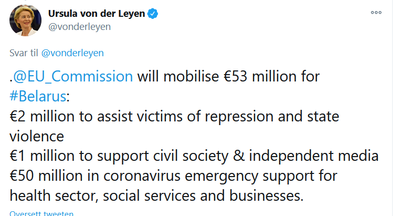 Asked for or not, in August 2020, the EU said it will spend €53 million on Belarus, officially camouflaged as "coronavirus emergency support".[17]

An ambassador to Belarus

Citizens of Belarus on Wikispooks