Guyana is a country on the northern mainland of South America and the capital city is Georgetown. Guyana is bordered by the Atlantic Ocean to the north, Brazil to the south and southwest, Venezuela to the west, and Suriname to the east. 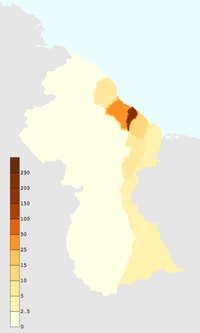 The chief majority (about 90%) of Guyana's 744,000 population lives along a narrow coastal strip which ranges from a width of 16 to 64 kilometres (10 to 40 mi) inland and which makes up approximately only 10% of the nation's total land area.[1]

The present population of Guyana is racially and ethnically heterogeneous, with ethnic groups originating from India, Africa, Europe, and China, as well as indigenous or aboriginal peoples. Despite their diverse ethnic backgrounds, these groups share two common languages: English and Creole.

The largest ethnic group is the Indo-Guyanese (also known as East Indians), the descendants of indentured laborers from India, who make up 43.5% of the population, according to the 2002 census. They are followed by the Afro-Guyanese, the descendants of slaves from Africa, who constitute 30.2%. The Guyanese of mixed heritage make up 16.7%, while the indigenous peoples (known locally as Amerindians) make up 9.1%. The two largest groups, the Indo-Guyanese and Afro-Guyanese, have experienced some racial tension.[2][3][4]

From 1953-64, the UK and the US went to great lengths to prevent a democratically elected leader of British Guiana/Guyana from governing. Cheddi Jagan had tried to remain neutral and independent and was elected three times. Using a variety of tactics including general strikes and disinformation to "terrorism" and British legalisms, the U.S. and Britain finally forced Jagan out in 1964. John F. Kennedy had given a direct order for his ouster, as, presumably, had Eisenhower.

One of the better-off countries in the region under Jagan, Guyana, by the 1980s, was one of the poorest. Its principal export became people.[5]

After their preferred leader, Afro-Guyanese Forbes Burnham, received power in 1964, conditions in the colony began to stabilize after the regime change effort. The new coalition administration broke diplomatic ties with Cuba and implemented policies that favored the local elite and foreign industry.

On February 23, 1970, Guyana, still under Burnham, swung leftward and declared itself a "cooperative republic" and cut all ties to the British monarchy. The governor general was replaced as head of state by a ceremonial president. Relations with Cuba were improved, and Guyana became a force in the Nonaligned Movement. In August 1972, Burnham hosted the Conference of Foreign Ministers of Nonaligned Countries in Georgetown, where he spoke on imperialism and the need to support African liberation movements in southern Africa. Burnham also let Cuban troops use Guyana as a transit point on their way to the war in Angola in the mid-1970s.

In the early 1970s, electoral fraud became blatant in Guyana. PNC victories always included overseas voters, who consistently and overwhelmingly voted for the ruling party. The police and military intimidated the Indo-Guyanese. The army was accused of tampering with ballot boxes.

Guyana and Venezuela have a long history of debate surrounding their border,[6] an issue that became of geopolitical importance after suspected large oil deposits were discovered.