Pablo Ruiz Picasso was a Spanish painter, sculptor, printmaker, ceramicist and theatre designer who spent most of his adult life in France. Regarded as one of the most influential artists of the 20th century, he is known for co-founding the Cubist movement, the invention of constructed sculpture, the co-invention of collage, and for the wide variety of styles that he helped develop and explore.

Picasso's work is often categorized into periods. While the names of many of his later periods are debated, the most commonly accepted periods in his work are the Blue Period (1901–1904), the Rose Period (1904–1906), the African-influenced Period (1907–1909), Analytic Cubism (1909–1912), and Synthetic Cubism (1912–1919), also referred to as the Crystal period. Much of Picasso's work of the late 1910s and early 1920s is in a neoclassical style, and his work in the mid-1920s often has characteristics of Surrealism. His later work often combines elements of his earlier styles.

Exceptionally prolific throughout the course of his long life, Picasso achieved universal renown and immense fortune for his revolutionary artistic accomplishments, and became one of the best-known figures in 20th-century art. 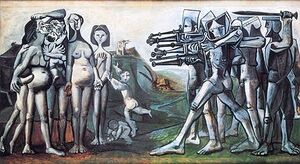 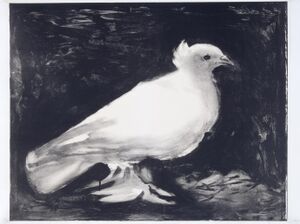 Picasso remained aloof from the Catalan independence movement during his youth despite expressing general support and being friendly with activists within it.[1] He did not join the armed forces for any side or country during World War I, the Spanish Civil War, or World War II. As a Spanish citizen living in France, Picasso was under no compulsion to fight against the invading Germans in either world war. However, in 1940, he did apply for French citizenship, but it was refused on the grounds of his "extremist ideas evolving towards communism". This information was not revealed until 2003.[2]

During World War II, Picasso remained in Paris while the Germans occupied the city. Picasso's artistic style did not fit the Nazi ideal of art, so he did not exhibit during this time. He was often harassed by the Gestapo. During one search of his apartment, an officer saw a photograph of the painting Guernica. "Did you do that?" the German asked Picasso. "No," he allegedly replied, "You did."[3]

In 1944, Picasso joined the French Communist Party. He attended the 1948 World Congress of Intellectuals in Defense of Peace in Poland, and in 1950 received the Stalin Peace Prize from the Soviet government.[4] Party criticism in 1953 of his portrait of Stalin as insufficiently realistic cooled Picasso's interest in Soviet politics, though he remained a loyal member of the Communist Party until his death.

During his life he painted a number of political paintings. Guernica (1937) is the most famous, a response to the 26 April 1937, bombing of Guernica, a Basque Country town in northern Spain during the Civil War.

He also painted the 1951 Massacre in Korea about the No Gun Ri Massacre in July 1950, when an undetermined number of South Korean refugees were massacred by U.S. soldiers, or the Sinchon Massacre of the same year, a similar mass killing in South Hwanghae Province, North Korea.

Dove (French: La Colombe) is a lithograph on paper created by Pablo Picasso in 1949. The lithograph displays a white dove on a black background, which is widely considered to be a symbol of peace. The image was used to illustrate a poster at the 1949 Paris Peace Congress and also became an iconographic image of the period, known as "The dove of peace".

This page imported content from Wikipedia on 01.01.2022.
Wikipedia is not affiliated with Wikispooks.   Original page source here
Retrieved from "https://wikispooks.com/w/index.php?title=Pablo_Picasso&oldid=235963"
Categories: