Lona Valmoro received an undergraduate degree from Rutgers University and a her Master's from the London School of Economics.

Lona Valmoro is a former Special Assistant to Secretary of State Hillary Rodham Clinton. Lona served as senior advisor to Clinton during her two terms in the US Senate and played key roles in Clinton's two campaigns for the US Senate and her 2008 bid for the Democratic presidential nomination. Prior to her positions with Clinton, Valmoro worked on Senator Robert Torricelli's 1996 US Senate campaign and subsequently was Torricelli's Deputy Chief of Staff in the US Senate.[4][1] 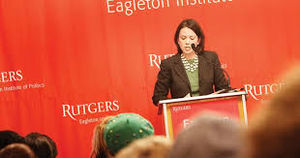