Athens is the capital and largest city of Greece.

The Municipality of Athens has an official population of 664,046 people.The four regional units that make up what is referred to as Greater Athens have a combined population of 2,640,701. They together with the regional unit of Piraeus (Greater Piraeus) make up the dense Athens Urban Area which reaches a total population of 3,090,508 inhabitants (in 2011). According to Eurostat, Athens had in 2013 3,828,434 inhabitants, having decreed compared with the pre-economic crisis.[1]date of 2009 (4,164,175) 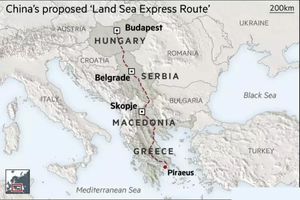 The port of Pireus (Athens) is the terminal for the Chinese 'Land Sea Express Route', part of the New Silk Roads project.

Athens is the financial capital of Greece. According to data from 2014, Athens as a metropolitan economic area produced 130 billion US-dollars as GDP in PPP, which consists nearly a half of the production for the whole country.

Athens is one of the major economic centres in south-eastern Europe and is considered as a regional economic power in Europe generally. The port of Piraeus, where big investments by COSCO have already been delivered during the recent decade and the completion of the new Cargo Centre in Thriasion,[2] are the economic landmarks of the upcoming years.

The banking sector is represented by National Bank of Greece, Alpha Bank, Eurobank, and Piraeus Bank, while the Bank of Greece is also situated in the City Centre. The Athens Stock Exchange, the only in Greece, has been severely hit by the Greek government-debt crisis and the decision of the government to proceed into capital controls during summer 2015. As a whole the economy of Athens and Greece has been severely hit.[3]