Penelope Mary Mordaunt [1] is a Conservative Party politician who was appointed Leader of the House of Commons and Lord President of the Council by Liz Truss in September 2022.

Theresa May appointed Penny Mordaunt to her 'dream job' as Secretary of State for Defence on 1 May 2019,[2] following the sacking of Gavin Williamson.[3] Two months later, she was sacked as Defence Secretary by the new PM Boris Johnson and replaced by Ben Wallace.[4]

Penny Mordaunt was described as a 'dark horse candidate' for Prime Minister to replace Boris Johnson[5] but was eliminated from the race after picking up the backing of only 105 Tory MPs, compared to Rishi Sunak with the backing of 137 colleagues and Liz Truss who gained the support of 113 in the fifth round of voting.[6]

Penny Mordaunt has been the Member of Parliament (MP) for Portsmouth North since the 2010 UK General Election, and served in the Cameron Government as Parliamentary Under-Secretary of State at the Department for Communities and Local Government prior to[9][10] being appointed Minister of State for the Armed Forces at the Ministry of Defence in May 2015, the first woman to hold this post.[11]

From July 2016 to November 2017, she served in the May Government as Minister of State at the Department for Work and Pensions, and in November 2017 she was appointed International Development Secretary.[12]

On 1 May 2019, Penny Mordaunt was appointed Defence Secretary after Gavin Williamson was dismissed by Prime Minister Theresa May following a leak of highly classified information from the National Security Council.[13] She is the first woman to have held this post.

In an impassioned speech at her campaign launch, she claimed that, were she Prime Minister, she would bring back traditional Tory values, but this claim appeared to evaporate before she'd even left the building as it emerged she was little more than another Schwab puppet.

Mordaunt has written her own version of Schwab's Great Reset for Britain, called "Greater Britain After the Storm" in which she makes the same sort of claims as Schwab about the world, society and the economy. A book that the Telegraph called: "The most important political book nobody has read, yet".

The foreword of the book is by one Bill Gates, a personal friend of Mordaunt's and someone who sits at the top table of the world's elite.

Her campaign for the Tory leadership was also peppered with key words and phrases that allude to the WEF's 'Great Reset'. Tweeting in the third person Mordaunt wrote:

If Mordaunt becomes PM, Britain will be subjected to all of the Neo-Marxist ideologies espoused by Schwab: Total control of your money, food, power, and the internet. Don't let the glossy veneer fool you; Mordaunt represents a threat to democracy itself.[17]

Penny Mordaunt is the clean cut lady from the shires with an earthy smile and a heart of stone. Her voting record is one of suppressing any help for working people and every hand out going for the rich and the bankers.

Mordaunt voted for a reduction in spending on welfare benefits and against raising benefits in line with prices. She voted to reduce housing benefit for tenants deemed to have an extra bedroom (which Labour described as the 'bedroom tax'), and against spending public money to create guaranteed jobs for young people who have spent a long time unemployed.

To keep her extreme-right values polished like the family silverware, Ms Mordaunt has consistently voted to reduce corporation tax and for mass surveillance of people’s communications and activities. She voted for the disastrous privatisation of Royal Mail and against measures to prevent climate change.

She will make an excellent Prime Minister for the corporations, oil companies, American pharmaceutical giants carving up the NHS, the arms industry and every dodgy landlord, gang boss in the construction industry and chums who hide their money in secret accounts and don’t pay tax.[18] 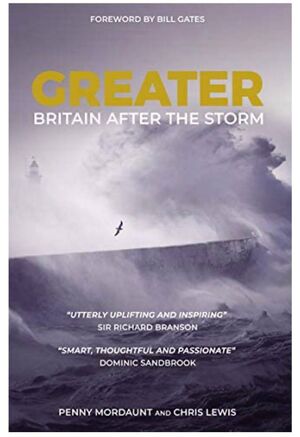 In January 2018, International Development Secretary Penny Mordaunt stood alongside Bill Gates at an Edinburgh University seminar and spoke on the subject "How science and innovation has the power to transform agriculture in sub-Saharan Africa". Her speech concluded:

The UK is, and will remain, an outward-looking global research super-power.

We are proud of our outward-looking research culture here in the UK – and this government is committed to maintaining our position as a global leader in this field.

But no one country has all the answers today. We need to work across continents on bold, innovative solutions that harness the best of human ingenuity.

We know we can deliver spectacular results when we pool our resources and expertise.

To do this, we will continue to drive innovation through our strong partnerships – with UK academia, with the private sector and with our friends at the Gates Foundation.

Harnessing UK technology and innovation will help us reduce poverty and alleviate suffering and delivers a safer, more secure world for Britain too.[19]

In 2014 Mordaunt was a contestant on ITV show Splash!, in which celebrities learned to dive.[20] She donated all of her £10,000 appearance fee to veterans charities.[21]

Prior becoming an MP, Mordaunt worked in business and communications and is currently the only female MP who is a Royal Naval Reservist. Following a training exercise in 2014, Acting Sub-Lieutenant Penny Mordaunt MP, who also belongs to HMS King Alfred, said:

“This was by far the most challenging exercise I’ve taken part in and you really felt that all the skills, knowledge and resilience you’d built up over training were being tested to the max.”[22]

This page imported content from Wikipedia on 2 May 2019.
Wikipedia is not affiliated with Wikispooks.   Original page source here
Retrieved from "https://wikispooks.com/w/index.php?title=Penny_Mordaunt&oldid=253687"
Categories: