From Wikispooks
< CIA
Jump to navigation Jump to search

The CIA has been researching torture techniques for decades. An unknown number of victims are tortured to death[1], many others, according to a 2016 New York Times article, "experienced lasting harm after harsh treatment in American custody, including post-traumatic stress disorder".[2] The only CIA official prosecuted in this regard has been John Kiriakou, a whistleblower, who was sentenced to 30 months in prison in 2013.[3] The US Senate's torture report noted that CIA interogators objected but were told to continue the torture, and did so for “more than two weeks” after questioning the legality of what they were doing.[4]

The CIA's Phoenix Program used the lawless environment of the Vietnam War to carry out research on the use of torture. Methods included "rape, gang rape, rape using eels, snakes, or hard objects, and rape followed by murder; electric shock ('the Bell Telephone Hour') rendered by attaching wires to the genitals or other sensitive parts of the body, like the tongue; the 'water treatment'; the 'airplane' in which the prisoner's arms were tied behind the back, and the rope looped over a hook on the ceiling, suspending the prisoner in midair, after which he or she was beaten; beatings with rubber hoses and whips; the use of police dogs to maul prisoners."[5]

Military intelligence officer K. Milton Osborne witnessed "the use of the insertion of the 6-inch dowel into the canal of one of my detainee's ears, and the tapping through the brain until dead. The starvation to death (in a cage), of a Vietnamese woman who was suspected of being part of the local political education cadre in one of the local villages ... The use of electronic gear such as sealed telephones attached to ... both the women's vaginas and men's testicles [to] shock them into submission."[6]

The CIA and special forces supervised and trained South Vietnamese forces in carrying out the torture.[7]

The Office of Public Safety, officially part of USAID, though in practice closely connected to the CIA, was shut down in 1974 after James Abourezk publicised the fact that it was training South American police in the use of torture.

Torture is carried out at a range of locations, including Guantanamo Bay and a network of CIA secret 'black sites'.[2] In 2004 CIA retiree, Bob Baer told a reporter of the British political weekly New Statesman, how the CIA deals with "terrorism" suspects, "If you want a serious interrogation, you send a prisoner to Jordan. If you want them to be tortured, you send them to Syria. If you want someone to disappear - never to see them again - you send them to Egypt."

The Western Hemisphere Institute for Security Cooperation, formerly known as the US Army School of the Americas has for decades trained government personnel of Latin American countries in techniques such as torture.

A Senate intelligence committee into the CIA's torture program produced a 6000 page report after a $40 Million investigation, which has never been made public. In 2014, one member of this committee, Senator Mark Udall, wrote a letter to the White House, alleging that

Like with many illegal activities (see CIA/Black budget), the CIA began to emerge as a new trendsetter and Black site kingpin during the 2000s.[9] The groundwork was set in the 1990s as the CIA was granted permission to use an extraordinary rendition of indicted terrorists to American soil in a 1995 presidential directive signed by President Bill Clinton, following a procedure established by George H. W. Bush in January 1993.[10][11]

The Washington Post was the first to report on "secret prisons" being run in "metal containers" in Bagram Air Force base, Afghanistan.[12] This and a report by The Guardian naming Guantanamo Bay[13] were kept surprisingly silent by corporate media.

After the Washington Post released a new article in 2005, George W. Bush tried to silence criticism into... going to war with Iraq 2003 after a group of Saudi's, Lebanese and Egyptians, financed by an officially former Saudi operative living in Afghanistan and sheltered by Pakistan attacked the US, now known as the 9/11 hijackers. When being confronted with claims by The Washington Post that the CIA set up a global secret prison program, Bush responded to the media in Panama in 2005 was that the US does not torture. Although Bush continued his speech with suspicious hard-talk, it largely went unquestioned at the time.[14] Surprisingly in September 2006, Bush acknowledged the black sites with what the BBC called "making a limited disclosure of the CIA program because interrogation of the men it held was now complete and because a US Supreme Court decision had stopped the use of military commissions for trials.",[15] along with announcing a black site along with it where most were being brought to Guantanamo Bay. The International Committee of the Red Cross announced a report after getting in contact with some former detainees after their trip to GizMo, forwarding that report also to the Bush administration.[16] The report was noted by New York Times writer Mark Danner for its Orwellian language, highlighting naming the interrogating methods as "Alternative set of procedures", revealing confidential interviews of Abu Zubaydah, Walid bin Attash and Khalid Shaikh Mohammed.[17]

A YouGov survey of December 2011 stated that 47% of US citizens believe that torture is sometimes justified. In 2014 Sarah Palin urged for an increased use of torture in what the UK Independent referred to as a "crowd-pleasing speech to Republican grass-roots".[18] The Pew Research Center reported in 2015 that "the U.S. is one of only 12 countries where half or more approve of their own government using torture against suspected terrorists."[19]

US President Barack Obama admitted on August 1st, 2014, that "we tortured some folks", but was unforthcoming about the consequent prosecutions mandated by the United Nations Convention Against Torture.[20]

In April 2015, The New York Times fingered the American Psychological Association in the torture programme.[21] Other had described it as "central" to the programme[22] [23]

The CIA's response was to try to suppress the report.

“[T]he CIA inspector general’s office recently admitted to ‘mistakenly’ destroying their only copy of the classified report. Although CIA Director John Brennan possesses another copy of the torture report, he refuses to send a replacement to the internal watchdog’s office.”
(17 May 2016)  [24]

In 2005, US Senator John McCain, a former POW from the Vietnam War, attached a passage to a military spending bill that would proscribe inhumane treatment of detainees and restrict US officials to use only the interrogation techniques mentioned in the US Army's field manual on interrogation. Ninety of the one hundred Senators supported this amendment.

On Thursday, October 20, 2005, Vice President Dick Cheney proposed a change to McCain. Cheney unsuccessfully tried to get McCain to limit the proscription to just military personnel, thus allowing CIA personnel the freedom to use torture.[25]

Former US President George W Bush has openly admitted authorising torture and since 2011 has been the subject of ongoing legal action in this regard.[26]. Dick Cheney has been more guarded, stating that "Some people called it torture. It wasn’t torture... If I would have to do it all over again, I would. The results speak for themselves."[27]

Two FBI informants, Donald Vance and Nathan Ertel were detained and tortured in Iraq in 2006 by the US occupying forces without any legal representaion. They filed suit for damages and Alternet reported that "Former Secretary of Defense Donald Rumsfeld has been stripped of legal immunity for acts of torture against US citizens authorized while he was in office." However, in 2012 the Seventh Circuit Court of Appeals ruled that Rumsfeld could not be sued for his role in approving the torture techniques, a decision which the US Supreme Court upheld in 2013 without comment, establishing that US military officials are immune to civil lawsuits over torture.[28][29][30]

A 6300 page report by the Senate Intelligence Committee concluded that the CIA misled the US government and the public about aspects of its 'brutal interrogation program' for years. One (unnamed) U.S. official briefed on the report stated "The CIA described [its program] repeatedly both to the Department of Justice and eventually to Congress as getting unique, otherwise unobtainable intelligence that helped disrupt terrorist plots and save thousands of lives. Was that actually true? The answer is no.”[31] 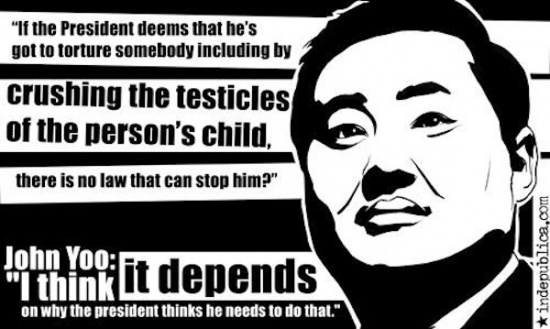 In 2015, the ACLU launched a lawsuit against Dr. James Mitchell and Bruce Jessen, on behalf of two living former prisoners and one who died of hypothermia after an interrogation by the CIA. The CIA had paid the two psychologists $80 million for their advice on methods of torture. In August 2017, the suit was settled by a secret out of court settlement.[32]