The Drug Enforcement Administration was established on July 1, 1973, by Reorganization Plan No. 2 of 1973, signed by Richard Nixon, as a part of his rhetorical "war on drugs".

Douglas Valentine writes that "the DEA and its predecessor federal drug law enforcement organizations have always been infiltrated and, to varying degrees, managed by America’s intelligence agencies."[1]

Sibel Edmonds' testimony illustrates how this infiltration plays out in these days of high technology mass surveillance. A recurrent pattern frustrates FBI and/or DEA drug sting operations which pose a serious threat to deep state drug trafficking. Apparently, the US State Department regularly gets such operations called off at the last minute by claiming that since the traffickers have diplomatic immunity they must under no circumstances be arrested, for fear of causing a diplomatic incident. As she notes, this is suggestive not only of deep state involvement in the global drug trade, but also of mass surveillance used in real time to monitor the actions of selected individuals.[2] Her observations correlate closely with other whistleblower testimonies and the "disappearance" of drug kingpins such as Juan Carlos Ramírez Abadía.[3][4] 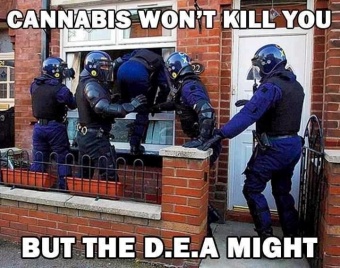 The US deep state uses the DEA as a vehicle to deploy mass surveillance in the US.

In 2018 US government documents revealed that both the DEA was hiding CCTV cameras in street lights.[5]

In 2015 it emerged during a court case that the DEA had secretly kept a vast database of American phone calls to foreign countries for over a decade. They claimed that the programme had been stopped.[6]

Under the US Justice Department's program of "civil asset forfeiture", the DEA claims the right to seize people's property without charging them with a crime. "We don’t have to prove that the person is guilty," an Albuquerque DEA agent stated "It's that the money is presumed to be guilty."[7]

The DEA Special Operations Division (SOD) is a secretive division within the DEA, which forwards information from wiretaps, intercepts and databases from various sources to federal agents and local law enforcement officials. The technique of Parallel Construction allows the group to use classified information obtained by illegal mass surveillance (normally disbarred) by the simple expedient of hiding it from the prosecution, defense, judge and jury alike.

There was no official narrative about the DEA's Special Operations Division until their existence was betrayed by information from the Edward Snowden Affair.