The Nice truck event occurred in the French city of Nice on 14 July 2016. It was filmed by Richard Gutjahr, who 8 days later filmed the shooting in Munich.

On 14 July 2016 Mohamed Lahouaiej Bouhlel, a "lone nut"[1] Tunisian resident of France with mental health problems,[2][3] deliberately drove a 19-tonne cargo truck into a crowd celebrating Bastille Day on the Promenade des Anglais in Nice, killing 84 people and injuring hundreds more.[4] He fired a 7.65mm automatic handgun into the crowd[5] and then at police before they shot him dead on Thursday night, bringing the death toll to 85. The truck was initially reported as containing guns and "larger weapons",[6] but they "turned out to be fakes or replicas."[1]

This event was filmed by German journalist Richard Gutjahr, who was holidaying in Nice, but happened to have his phone with him so could film it. Just 8 days later, back home in Munich where both he and his daughter obtained footage related to the 2016 Munich Shooting (although he later "accidentally" deleted some of these photos).

The incident was described as the third mass murder in France since January 2015, following the Charlie Hebdo and Île-de-France attacks on 7–9 January 2015, and the Paris attacks on 13 November 2015.[7]

On 16 July 2016, the IS-run media outlet Aamaq cited a "security source" as saying its "soldier had carried out the operation in response to calls to target the citizens of coalition countries fighting the Islamic State."[8] 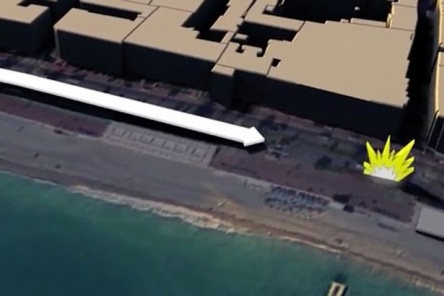 A frame from this animation, published on Jul 15, 2016 by the AFP news agency[9] was claimed on July 22nd to be part of an ISIS video 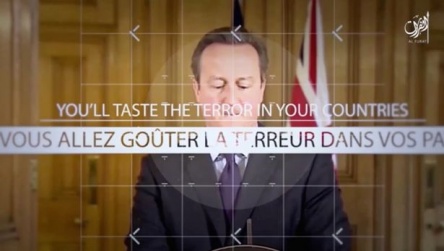 "You'll taste the terror in your countries", another still from the purported ISIS video which seems not to have found its way onto Youtube

After commercially-controlled media continued to express doubt about the ISIS connection,[10][11] on 22nd July, they media were provided with an "ISIS propaganda video" which "praises the Nice truck attack – and threatens a copycat mass killing in London."[12] The video, which includes 3D computer animation sequence about the truck, includes the text "You'll taste the terror in your countries" over an image of David Cameron" was reported upon on July 22nd by the Mirror[13], Daily Star[14], The Sun[15], Daily Mail[16] and on the 23rd the International Business Times, which claimed that the video "appears to have been created weeks ago".[17] As of October 2016, these appear to have been the only UK newspapers to have picked this up, and the purported video did not appear to be available online.

A state of emergency was extended for a further 3 months.[18] The BBC reported that a large white banner was produced asking "Why children?" And, in a child's handwriting: "Why do you want war?"[citation needed] French President François Hollande stated "This is undoubtedly a terrorist attack; the whole of France is under the threat of an Islamic terrorist attack". The Guardian noted that he was "the most unpopular president of the fifth republic."[19] 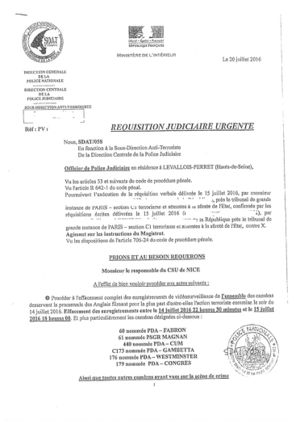 Le Monde reported on 22 July 2016 that a French judge[Who?] ordered that all recordings for 18 hours before the attack, on 1256 CCTV cameras in Nice be erased before being shown to anyone. The mayor refused to grant this demand[21] but it is unknown whether footage was made public.

On 22 July 2016, the BBC headlined a report "Five suspected accomplices charged" and claimed that "Like Lahouaiej-Bouhlel, none of those detained were known to French intelligence prior to the attack."[22]