The 2016 Saumur Daesh Cell was chanced upon by gardeners in Saumur, France. On the afternoon of 21st September, they saw a white van leaving a cave. Investigating, they discovered a cache of materials indicative of a Daesh (ISIS) terror cell, including ISIS flags, audio/video equipment and a generator. Police were notified, only to later report a "false alarm" after the information had been passed up to the French Ministry of Defense. It was later reported to have been a "terror exercise", although (in an echo of the Ryazan incident) the local police denied all knowledge.[1] The commercially-controlled media response was limited, and no connection was made to Operation Gladio or Operation Gladio/B. 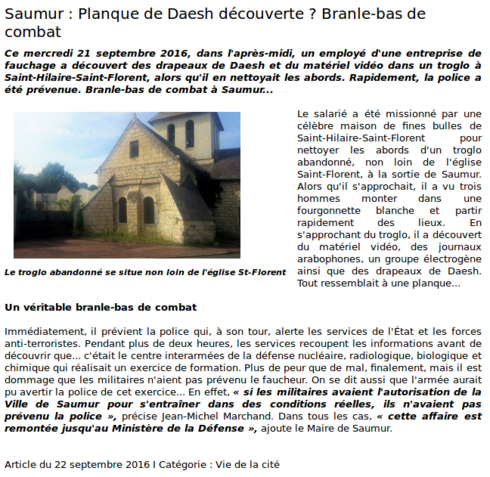 The report from the local newspaper Saumur Kiosque. 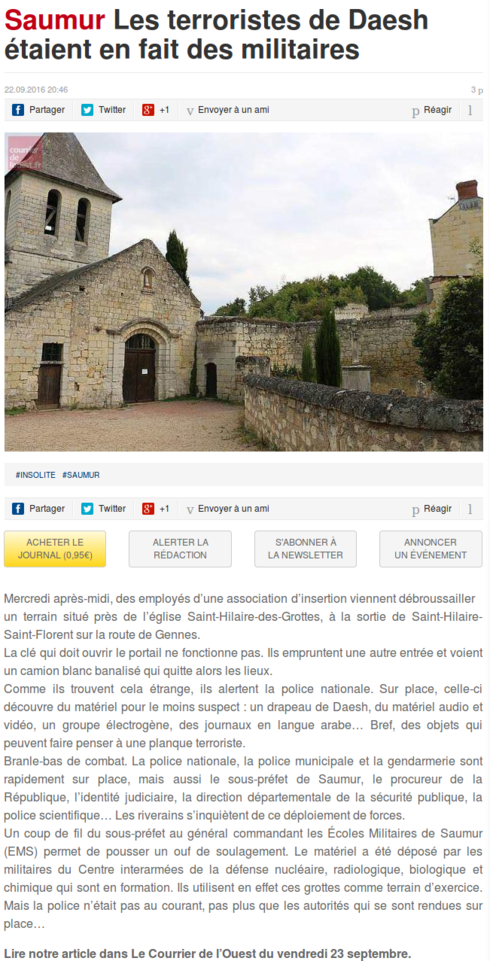 The report from the regional newspaper Courrier de l'Ouest.

Information about the 2016 Saumur Daesh Cell appears to come from two original sources, both in French:[2]

The same information was widely shared by national media outlets. Few if any appear to have connected it to Operation Gladio/B and the wave of false flag terrorism.

The cave was situated on land close to the church of Saint-Hilaire-des-Grottes, by the Saint-Hilaire-Saint-Florent exit on the road to Gennes. Finding their key did not unlock the gate, gardeners used an alternative entrance to the land, only to see three men[1] get into a white van and leaving the place. Looking in the cave, they found Arab language newspapers, audio and video material and Daesh flags.[1]

The finders alerted local police, who in turn passed on the information to the state security forces. Information flowed for over two hours, with frantic enquiries being made. The Mayor of Saumur reports that this went up to the French Defence Ministry. It was then reported by the unnamed 'général commandant' of the Écoles Militaires de Saumur to have been an 'exercise'. In an echo of Ryazan, Jean-Michel Marchand denied that the local police had any information about the exercise.[1]

Various commercially-controlled media outlets picked up the story.[4][5] Some subsequently removed it from their website.[6][7]

17 July 2017 Robin  An important clue to the origins of modern "terrorism" in Europe
The page collects the evidence of a telling mistake by the "terrorists" employed by the French military. Corporate media quickly lost interest in the story.