From Wikispooks
< Jo Cox
Jump to navigation Jump to search 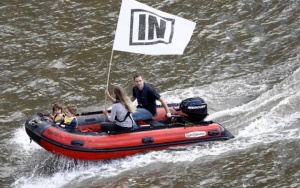 On 15 June 2016, UKIP leader Nigel Farage led a flotilla of some 35 fishing boats and other vessels along the River Thames to the Houses of Parliament. The flotilla had been organised by Scottish skippers as part of the EU Referendum Fishing for Leave campaign. Tower Bridge had to be opened for 20 minutes, causing delays for motorists and the Brexit boats were forced to pass through IN banners draped across the bridge.

The Brexiteers were soon trailed by a group of Remain supporters led by former pop star Bob Geldof on a pleasure cruiser who had armed himself with a huge sound system to counter the flotilla. The Boomtown rats star blasted out songs including Chicago's "If you leave me now" and Dobie Gray's "In With The In Crowd."​ Addressing Farage over a PA system on his vessel, the Sarpedon, Geldof said:

"You are no fisherman's friend. It’s not like Farage is interested. If he was then he would have shown up for more than one out of the last 43 EU fishery meetings. You are a fraud, Nigel. Go back down the river because you are up one without a canoe or a paddle. Stop lying. This election is too important."[2]

Geldof's lone Remain boat was later joined by a number of rubber dinghies flying the IN flag, including that of Jo Cox with her husband and their two children.[3]

City bosses had expressed concerns that Tower Bridge was being used for such a “politically charged event”, but the Port of London Authority had given permission for 12 boats from the flotilla to continue to Westminster. The boats arrived outside Parliament at about noon, ahead of the final Prime Minister’s Questions before votes are cast next Thursday. A UKIP spokesman said:

“Of course it’s a political event — there’s a referendum on June 23 that matters passionately to millions of people across these islands."[4]

Former Labour leader Lord Kinnock had tears running down his cheek as he told BBC Breakfast:

"We’ve known Jo since she came to work for Glenys in the European Parliament 20 years ago, and it would be no exaggeration to say that both of us felt about her as if she was a beloved niece, because that’s the kind of relationship it was.

"She was a woman of huge intelligence, sparkling. She was merry, she had a marvellous sense of dedicated purpose without any kind of piety or pomposity at all. She was wonderful company but she was also a ferociously effective political activist and she showed that before she became a Member of Parliament and we were hugely proud when she was selected and then elected.

"Glenys is bereft. Neither of us can really grasp the full meaning. Our immediate thoughts were for Brendan and their beautiful, wonderful kids. It's a death in the family, there's no doubt at all about that – our family, the Labour family, the family of Batley and Spen – because that's the kind of feeling, the response that she nourished. There's a phrase from Shelley, 'a day-star of the age' and Jo Cox was a day-star."[5]