Western Global Airlines N545JN, a CIA-connected cargo plane, flew to South Africa from Europe on 13 February 2016. After initial confusion, the official narrative became that it landed in Munich, Germany (visibly bloodstained[1]) and took on a "Diplomatic Shipment" of 67 tonnes of banknotes intended for the South African Reserve Bank. "The plane stopped at Harare International Airport to refuel and ground handling staff noticed blood dripping from the aircraft air conditioning vault." The Africa News Agency cites a report that "a search was made and the body of an adult male fell out.”[2] The plane and crew were held for a few days by Zimbabwe police, but as with the 2006 bust of a CIA-connected DC-9 carrying 5.6 tonnes of cocaine,[3] no prosecutions were forthcoming.

On February 13th 2016 a Western Global Airlines McDonnell Douglas MD-11, registration N545JN (leased to Network Airline Management) completed flight AJK-4425 from Entebbe (Uganda) to Liege (Belgium), before flying on to Munich, still as flight AJK-4425 the same day. It took on 67 tonnes of freshly printed banknotes (out of its capacity of 160 tonnes)[4]. As the South African Reserve Bank later clarified:

Minor bloodstains were detectable on the side of the plane when it landed in Munich,[1] and ground staff in Munich asked about them, but reportedly believed the crew's explanation that the blood was because the plane had struck a bird.[6][7] 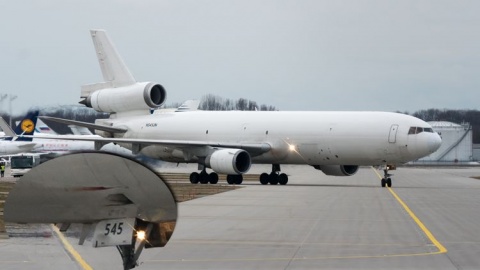 On Feb 13th 2016, N545JN taxiing in Munich, with the blood stains enlarged (Photo: Markus Schwab, a planespotter whose photograph of the aircraft in Munich showed blood stains on the right hand side of the fuselage - courtesy of the Aviation Herald)

After being denied landing in Maputo (Mozambique), the plane made what was initially referred to as an emergency landing at the Zimbabwean capital Harare[8] but which was later described as "a routine fuel stop in Zimbabwe".[6]

The crew consisted of three pilots ("led by two Americans")[9] and a mechanic as well as two passengers who were traveling as couriers for the diplomatic shipment.[10]

The cargo of banknotes comprised 67 tonnes of South African Rand.[11] With an exchange rate of about 15 South African Rand to the US Dollar[12] and notes up to 200 Rand[13], this could have had a face value of up to ~$2 US billion.

The Zimbabwe Herald reported that "the ground crew refueling the plane alerted local authorities" after noticing blood dripping from the plane. The authorities also noted that not only did the plane contain the body of a dead black man, it also had 67 tonnes of South African cash in the hold. The airline later explained that "during a routine fuel stop in Zimbabwe, a body was found in the lower compartment. The body is presumed to be a stowaway who may have entered the airplane during a previous stop."[6] Another report suggested that he "could be a vagrant who sneaked into the aeroplane when it landed at Entebbe International Airport in Uganda."[10] The South African Reserve bank reported that the "body was found in the plane’s cargo hold."[14]

The plane and contents were impounded[15] but later released, together with the crew.[9][16] The Zimbabwean police reportedly stated that the autopsy of the body revealed no internal or external injuries, the death was result of lack of oxygen, and so finding nothing suspicious, they let the crew continue on their way.[6] 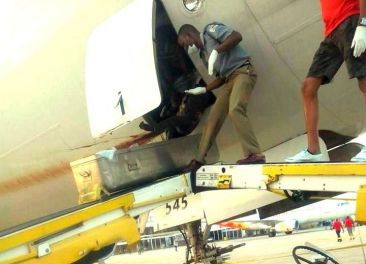 Planespotters' sitings indicate it seems to pay regular visits to Liege, Munich and Stanstead airports.[19][20] 5 days before this event, on Feb 8, 2016, the plane was videoed making a hard landing in strong winds at Stansted Airport.[21]

This story raises a number of concerns. Many of those questioned changed their stories or just refused to provide any explanation. The "emergency landing" for example was later being described as a "routine fuel stop". The Aviation Herald published a report on 16 February 2016 which remarked that they "met this story with disbelief. Blood dripping off the aircraft after so many hours of flight? This detail alone shot the story down at an instant." Their report contains little interpretation but plenty of useful details.[6]

Markus Schwab's photo appears to support the claim that Munich ground staff noticed blood stains.[6][22] Daniel Hopsicker reported the blood stains were reported as coming from the severed arm of a dead man.[9] Various sources report the body in an advanced state of decay - so much so that fingerprints could not be taken[23] and that his age could not be estimated.[10] This cannot be easily reconciled with the Zimbabwean police narrative of a stowaway dying from a simple lack of oxygen.

Daniel Hopsicker writes that "“Western Global Airlines” was once known as “Southern Air Transport.” The same management that brought Southern Air out of bankruptcy back in 2002 still owns it today (August 2016).[24] So the plane belongs to a CIA contractor. When Western Global started service, the airline announced - probably not tongue-in-cheek - that it would:

“serve the major cargo centers of South America, where they will be flying from Colombia to Miami carrying cut flowers.” But there’s another reason that’s the real clincher: The crisis PR firm the airline hires to release the press release did PR for the Minnesota dentist who killed “Cecil the Lion.”"[9]

"What is the identity of the dead man; why would anyone stow away on an Africa-bound aircraft in Germany; where did he come from; and how did he end up on the large cargo aircraft?"[23]

One might also wonder whether central banks often move cash like this, and if so, whether any controls or written records exist? Is there any kind of oversight?

As a quick scan of the sources for this article will suggest, Western commercially-controlled media was uninterested in this story.

19 August 2016 Robin  67 tons of cash and a body found on a CIA plane. Western media uninterested.
This is, particularly in light of other CIA plane events linked to the global illegal drug trade, not a story which should not be allowed to slip down the memory hole.