Islamic "terrorism" is a staple part of Operation Gladio/B, which was drawn up in the mid 1990s to replace fear of communists with fear of "Islamic terrorists" in particular and Islamophobia in general. 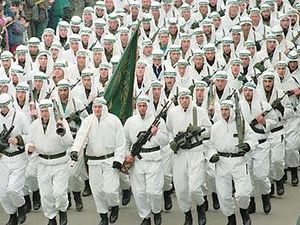 Extremists are increasingly being radicalised by their twisted conception of the Muslim faith, and expressing their anger in violent ways, including suicide bombings. This requires ever more strict monitoring of civil society to keep people safe.

The modern wave of references to "Islamic "terrorism"" can be traced back to the 1979 Jerusalem Conference on International Terrorism. This was an international a nexus of deep politicians who later profited from the "war on terror", both financially and in that it facilitated the deeper purposes they sought to achieve through the "War on Terror".

The Amerithrax anthrax attack was originally blamed on "Islamic terrorists". However, as with the 1995 OKC bombing, this diagnosis proved untenable and was adjusted to blame not US citizens, but a single "lone nut", Bruce Ivins. The attacks on New York and Washington D.C. are still officially attributed to Ossama Bin Laden's Al Qaeda.

The 21st century saw a rapid increase in highly publicised attacks, often after less publicised drills. The commercially-controlled media generally presumed these attacks to have been carried out by Moslems.

Al Qaeda was the supranational deep state's main brand of "Islamic terrorism" post 9-11, and many attacks were attributed to them, including the 2004 Madrid train bombings and the 2005 London Bombings.

Sibel Edmonds commented[When?] that the "Islamic State" was a back-up terror brand used when fear of Al Qaeda had subsided somewhat.[citation needed]

The 21st century has seen a rise in Islamophobia (and in the last few years, probably xenophobia in general), at least in the Western world. This can be seen as a success for the strategy of tension pushed by Operation Glabio B. Some nations, notably France, have enacted laws to outlaw or restrict some styles of dress traditionally preferred by Moslems.[1] The European Court of Human Rights upheld a French law banning veils on 1 July 2014, accepting the argument of the French government that the law was based on "a certain idea of living together."[2]

The UK Deep state has been promoting the concept of Cold War II through groups such as the Integrity Initiative, possibly as a fallback in case the British public tire of Islamic terrorism.