Friedrich–Alexander University Erlangen–Nürnberg (Friedrich-Alexander-Universität Erlangen-Nürnberg, FAU) is a public research university in the cities of Erlangen and Nuremberg in Bavaria, Germany. The name Friedrich–Alexander comes from the university's first founder Friedrich, Margrave of Brandenburg-Bayreuth, and its benefactor Christian Frederick Charles Alexander, Margrave of Brandenburg-Ansbach.

FAU is the second largest state university in the state of Bavaria. It has 5 faculties, 24 departments/schools, 25 clinical departments, 21 autonomous departments, 579 professors, 3,457 members of research staff and roughly 14,300 employees.[1]

In winter semester 2018/19 around 38,771 students (including 5,096 foreign students) enrolled in the university in 265 fields of study, with about 2/3 studying at the Erlangen campus and the remaining 1/3 at the Nuremberg campus. These statistics put FAU in the list of top 10 largest universities in Germany.[2] In 2018, 7,390 students graduated from the university and 840 doctorates and 55 post-doctoral theses were registered. Moreover, FAU received 201 million Euro (2018) external funding in the same year, making it one of the strongest third-party funded universities in Germany.

FAU is also a member of DFG (Deutsche Forschungsgemeinschaft) and the Top Industrial Managers for Europe network.

FAU claims leadership in a number of research topics. The current eight such major research areas are:[3]

The university was founded in 1742 by Margrave Friedrich von Brandenburg-Bayreuth as Academia Fridericiana (Friedrichsakademie) in Bayreuth. On February 21, 1743 it was given university status by duke Charles VII.

After Erlangen passed to Bavaria in 1810, the university - unlike the Nuremberg University in Altdorf - only escaped closure because it would be the only future Bavarian state university with a Lutheran theological faculty. It was therefore essential for the training of Protestant theologians in the new state. For a long time the university was shaped by Lutherans, but gradually lost its originally Lutheran denominational character. Even today, the Friedrich Alexander University has only one Protestant theological and no Catholic theological department.

After a long period of moderate development, the Erlangen University, like the other German universities, began to flourish at the beginning of the 1880s. In this context, the establishment of a historical faculty in 1872 on behalf of the Bavarian King Maximilian II by the historian Karl Hegel, should be mentioned.

The number of students rose in the 1880s from 374 at the end of the winter semester 1869/70 to 1000 in 1890. In the early years the law students were ahead, the theological faculty was the most popular at the beginning of the Bavarian period. This was only overhauled by the medical faculty in 1890. The number of full professors rose from 20 in 1796 to 42 in 1900, almost half of whom were employed by the Faculty of Philosophy, which included the natural sciences. These did not form their own faculty until 1928.

In 1863, Jakob Herz became the first Jewish professor at a university in Bavaria. After his death, a memorial was unveiled in his honor on May 6, 1875. The double-life-size bronze statue erected on today's Huguenot Square was removed after the National Socialists came to power and probably melted down for war purposes in 1944. The first women were admitted to university in 1897, and a woman's first doctorate took place in 1904.

About 75% of the university's students volunteered during the First World War or were drafted during the four years of the war. 384 members of the university lost their lives in the war. In the post-war period, with around 350 participants, many of the students joined the Freikorps Epp militia and took part in the suppression of the Munich Soviet Republic in 1919.[4]

As a result of the Bavarian Concordat (agreement) of 1924 with the Catholic Church, there are still several Catholic “Concordat Chairs” at the university. 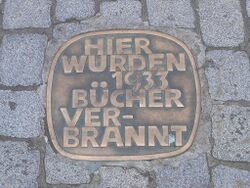 A plaque on Schlossplatz commemorates the book burning in 1933

In 1927 the natural sciences were spun off from the Philosophical Faculty into a joint Natural Science Faculty. The university made itself noted during the National Socialist era: as early as the late 1920s, it was the first German university to have a student parliament dominated by the majority of National Socialists[5]. The university survived the world wars relatively unscathed in terms of its structural damage. The denazification carried out by the American occupation forces led to the impeachment of numerous university lecturers after the end of the war. These were to a large degree replaced by professors from the former Eastern Territories (Czechoslovakia), which led to a change from a predominantly Protestant faculty to a predominantly Catholic one. After the Second World War, some faculties of the university were reopened in January 1946 and teaching was gradually expanded.

The post-war period led to further expansion, not only in student numbers, but also in chairs. Above all, the cooperation with the parts of Siemens AG that moved to Erlangen gave decisive impetus to further expansion and led, among other things, to the construction of the southern area for the technical and natural science faculties. In 1961, the Nuremberg University of Economics and Social Sciences, founded in 1919], was incorporated as a separate faculty, with which FAU gained its second major location. Since then it has been called "Erlangen-Nürnberg". The student revolt of the 1960s came to Erlangen with a slight delay and significantly weakened.

In 1966 a technical faculty was established. A new university complex was built in the south of Erlangen, which today combines engineering, computer science, inorganic chemistry and an additional cafeteria in a typical, concrete-dominated complex for the time. The Friedrich-Alexander-Universität was thus one of the first classically influenced universities to add a technical faculty to its range of subjects. In 1972 the Nuremberg University of Education was incorporated.

In 1982 the University Hospital Erlangen received national attention with the birth of the first test tube baby in Germany.

Since 1999, part of the new Erlangen district "Röthelheimpark" has been used by the university ("Röthelheim Campus"). It is the old artillery barracks, which were built in 1900 and a few buildings were added a little later.