Thomas de Maizière has been aggressive in promoting tools to facilitate mass surveillance. In particular, citing the difficulty that law enforcement agents have had investigating "terrorism", he has suggested that encryption should be illegal in Germany unless it contains a backdoor. He has also been lobbying for a "hackback" provision, which opponents say would effectively legalize almost any hacking that authorities wished to carry out on the internet, including shutting down arbitrary computers.[1] 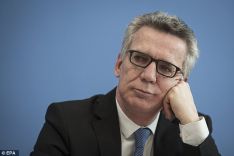