"Fact checkers" could be described as "professional ass-coverers"[1], in the sense that their activities (which the commercially-controlled media refer to as "fact checking") is designed to remove any evidence which disagrees with the official narrative du jour of those who paid for the "checking".

In pre-internet days, a small number of journalists produced the news and their work had to pass the scrutiny of experienced and wise editors, so while occasional mistakes were made, news production was more or less reliable because those involved were rewarded for objective reporting.

The internet upset this status quo, by allowing anyone to publish news — resuling in a surfeit of socially divisive "fake news". Because social media allows people to send any stories to their friends, there is a proliferation of clickbait (deliberately shocking falsehoods) instead of reliable news. People have become confused and so less and less able to discern truth from lies, so they need professional "fact checkers" to help verify stories for them.

The purported need for "fact checkers" is part of the ill-fated "fake news website" project that aimed to try to reverse decreasing trust in commercially-controlled media. They function as a cover for internet censorship.

Who shall "fact check" the "fact checkers"? In practice, the commercially-controlled media rely on a narrowly selected group of institutions as "fact checkers", all of which are funded by the establishment and are de facto committed to supporting it.

The case for professional "fact checkers" rest on the assumptions that:

Research has "found that in the majority of cases, the fact-checkers are just as subject to bias as the news they evaluate."[2]

The deception by corporate media is often not by incorrect facts, but by more subtle means such as misleading interpretations, biased language or selective omission of relevant facts. 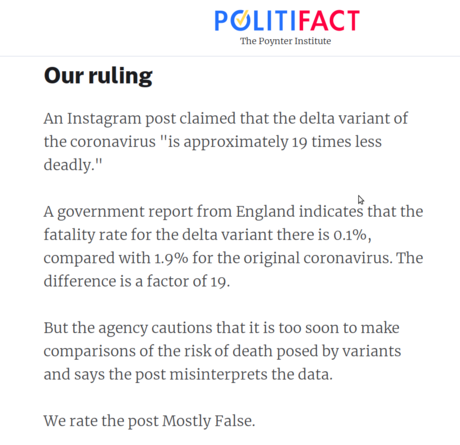 The consistent use of "fact checking" to try to promote COVID panic in 2020-21 eroded the credibility of the concept.

The commercially-controlled media made heavy use of "fact checkers" to try to promote fear of COVID-19, leading to an erosion of the effectiveness of the concept. PolitiFact reversed its "Pants on fire" evaluation of the theory that the virus emerged from a lab.

Danielle Anderson, a Facebook "Fact Checker" who claimed that there was no possibility that COVID-19 originated in the Wuhan Institute of Virology was later revealed to have worked there for 2 years on coronaviruses.[3]

Currently, professional fact checkers can only check a tiny proportion of news output, so software is used to flag up particular stories (or authors) for them to look at.

Various efforts have been made to replace human "fact checkers" process, but as of 2019, the fundamental obstacle that computers cannot reliably parse English (or other human languages) remains insurmountable, rendering automated "fact checking" inherently fallible.