Leipzig University (Universität Leipzig), in Leipzig in the Free State of Saxony, Germany, is one of the world's oldest universities and the second-oldest university (by consecutive years of existence) in Germany. 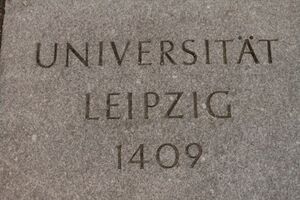 Memorial stone to the foundation of Leipzig University

Founding and development until 1900 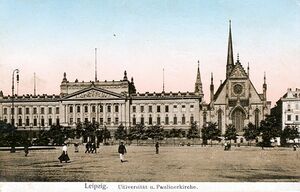 Leipzig University main building (1917). It was demolished by the socialist administration in 1968.

The university was founded on 2 December 1409 by Frederick I, Elector of Saxony and his brother William II, Margrave of Meissen, and originally comprised the four scholastic faculties. Since its inception, the university has engaged in teaching and research for over 600 years without interruption.

The university was modelled on the University of Prague, from which the German-speaking faculty members withdrew to Leipzig after the Jan Hus crisis and the Decree of Kutná Hora. The Alma mater Lipsiensis opened in 1409, after it had been officially endorsed by Pope Alexander V in his Bull of Acknowledgment on (9 September of that year). Its first rector was Johann von Münsterberg.

During the decline and dissolution of the Ottoman Empire in the 19th and first decade of 20th century together with some other German universities Leipzig University turned into one of the centers of higher education for state administrations and elites of newly independent Balkan states (Romania, Greece, Bulgaria and Serbia) educating over 5,500 students from the region in 1859–1909 period.[2]

During the first centuries, the university grew slowly and was a rather regional institution. This changed, however, during the 19th century when the university became a world-class institution of higher education and research. At the end of the 19th century, important scholars such as Bernhard Windscheid (one of the fathers of the German Civil Code) and Wilhelm Ostwald (viewed as a founder of modern physical chemistry) taught at Leipzig. 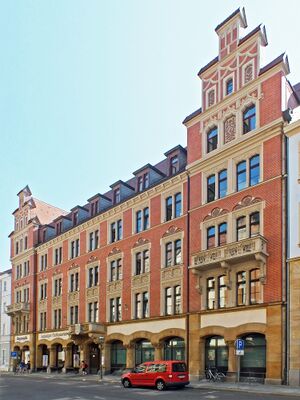 Formerly organized as a collegiate university, the Red College of Leipzig University was established in the 16th century.

Until the beginning of the Second World War, Leipzig University attracted a number of renowned scholars and later Nobel Prize laureates, including Paul Ehrlich, Felix Bloch, Werner Heisenberg and Sin-Itiro Tomonaga. Many of the university's alumni became important scientists.

Under Nazi rule many degrees of Jews were cancelled.[3] Some were later reinstated as Karl-Marx University degrees by the GDR. Noteworthy Nazis, such as Max Clara (chair of anatomy) taught at the university and were appointed to positions with great authority.

The university was kept open throughout World War II, even after the destruction of its buildings. During the war the acting rector, Erich Maschke, described the continuation of the university in a memo on 11 May 1945, announcing the vote for a new rector:

Since 4 December 1943 a fixed determination not to abandon the Leipzig University in the most difficult hour of its more than five-hundred-year history has bonded the professors with each other and with the students. The special task of repairing the damage caused by air attacks has now broadened out to the more general duty to save the continuity of our university and preserve its substance, at the very least its indestructible kernel, through the crisis that has now reached its fullest stage. After the destruction of most of the buildings and the majority of its libraries, this kernel is represented by the professoriate alone. This is what must be preserved as the great repository of value in the university.[4]

By the end of the war 60 per cent of the university's buildings and 70 per cent of its books had been destroyed.

The university under the German Democratic Republic

The university reopened after the war on 5 February 1946, but it was affected by the uniformity imposed on social institutions in the Soviet occupation zone. In 1948 the freely elected student council was disbanded and replaced by Free German Youth members. The chairman of the Student Council, Wolfgang Natonek, and other members were arrested and imprisoned, but the university was also a nucleus of opposition. Thus began the Belter group, with flyers for free elections. The head of the group, Herbert Belter, was executed in 1951 in Moscow. The German Democratic Republic was created in 1949, and in 1953 the university was renamed by its government the Karl Marx University, Leipzig after Karl Marx.

During this era, the university educated a large number of intellectuals from the global south, often fleeing political persecution. Some of them, like Michelle Bachelet from Chile, became future leaders.

After the reunification of Germany 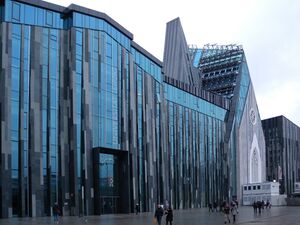 Main building of Leipzig University since 2012, the Augusteum at Augustusplatz.

In 1991, following the reunification of Germany, the university's name was restored to the original Leipzig University (Alma mater lipsiensis). The reconstruction of the University Library, which was heavily damaged during the war and in the GDR barely secured, was completed in 2002.

In 2008 the university was able to prevail in the nationwide "Initiative of Excellence" of Germany and it was granted the graduate school "BuildMoNa: Leipzig School of Natural Sciences – Building with Molecules and Nano-objects".[5] In addition, the university was able to receive grants from the Saxon excellence initiative for the "Life" project – a project that tries to explore common diseases more effectively.