The Clausthal University of Technology (Technische Universität Claustha}, also referred to as TU Clausthal or TUC) is an institute of technology (Technische Universität) in Clausthal-Zellerfeld, Lower Saxony, Germany. The small public university is regularly ranked among the Top German universities in engineering by CHE University Rankings.[1] More than 30 % of students and 20 % of academic staff come from abroad, making it one of the most international universities in Germany.[2] The university is best known for the prominent corporate leaders among its former students. In 2011, five of the 30 leading companies within the German stock index had alumni of TUC on their management board. Two of them as CEO.[3] [4] [5] [6] [7]

The academy of the local Hanoverian mining authority was established in 1775 at Clausthal in the Harz mountain range with its centuries-long history of mining in the Upper Harz (most notably at the Rammelsberg). Initially a school for pitmen and smelter workers, it was raised to the status of a mining college by the Westphalian minister Count Hans von Bülow in 1810. In 1864, at the behest of King George V of Hanover, the spin-off of a mining academy (Bergakademie) was founded.

Both institutions remained under joint administration after the annexation of the Kingdom of Hanover by Prussia in 1866, until in 1906 the academy was separated as an autonomous educational establishment directly subordinate to the Prussian government represented by a curator. It was one of only two mining academies in Prussia, the other being the mining college in Berlin established in 1770, a predecessor of the Berlin Institute of Technology.

After World War II, the academy passed under the authority of the West German state of Lower Saxony, it was renamed Technische Hochschule in 1966 and Technische Universität in 1968. 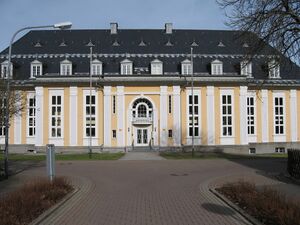