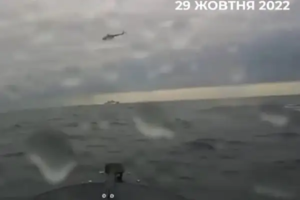 On 2 November 2022, in her weekly press briefing, Russian Foreign Ministry spokeswoman Maria Zakharova announced that the Russian Defence Ministry’s earlier charges, that British military specialists were behind the Kiev regime’s October 29 drone attack on Sevastopol, had been presented with documentation before a closed-door session of the UN Security Council on November 1, and that Britain’s Ambassador to Russia, Deborah Bronnert, would be summoned to the Foreign Ministry “shortly” to present her with the same evidence.

“28 October 2022 marks 78 years since the complete liberation of the Ukrainian Soviet Socialist Republic’s territory from Nazi invaders in 1944, and on 6 November we will mark 79 years since Kiev’s liberation from the Nazi occupiers in 1943. At the time it would never have occurred to our forefathers that a time would come when their ancestors would have to fight, arms in hand, an ideology of human hatred, the ideological successors of Bandera and Shukhevich, who were Nazi henchmen and have thousands of innocent lives on their conscience. It would never occur to anyone at the time that people with swastika tattoos would be walking around Kiev and priding themselves on wearing these symbols and exposing them.”

She continued: “Today, the Kiev regime employs unacceptable fascist war methods using terrorist tactics and in doing so is becoming increasingly similar to ISIS and al-Qaeda. This, however, is not surprising, considering that these groups were created by the same masterminds and instructors from Anglo-Saxon countries.

“This has been confirmed by the strikes carried out by the Ukrainian Armed Forces from the air and the sea on 29 October 2022, using unmanned vehicles against Russia’s Black Sea Fleet ships and infrastructure in Sevastopol. Kiev carried out these actions while receiving guidance from British specialists, as reported by the Defence Ministry of the Russian Federation. The Russian Federation informed the international community about these developments during a UN Security Council meeting. In this connection, the Foreign Ministry will summon the UK Ambassador soon.”[1]