Document:Russia’s “Save Ukraine” Memorandum: Prevent the Ukraine from “Going Fascist” 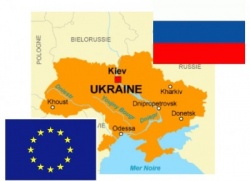 Wikispooks Comment Considered important by Wikispooks because it demonstrates that some very high-level and influential people in the Russian state clearly (and understandably) view the Ukraine as something approaching a red-line issue (without issuing ridiculous Obama-like red-line ultimata as over Syria in the summer of 2013). If the US and the West really are intent on forcing Russia and Iran to 'see things their way' - and all the evidence points to such a determination relentlessly hardening - then there is real danger that this could escalate into third world war territory very quickly.

★ Start a Discussion about this document
Russia’s “Save Ukraine” Memorandum: Prevent the Ukraine from “Going Fascist”

A "Fascist and Nazi Creeping Coup" in Ukraine:

A memorandum titled “Save Ukraine!” was published on February 12 in the edition of the Russian weekly Zavtra. [1] Written by experts for the Izborsk Club, an influential intellectual group accorded prominence by President Vladimir Putin in recent months, the statement defines a “fascist and Nazi creeping coup” in Ukraine as a strategic threat to the Russian Federation.

While holding the United States and the EU responsible for the regime-change project in Ukraine, the memorandum calls for summoning the USA to crisis-avoidance consultations under the 1994 Budapest Memorandum on Ukraine’s sovereignty or, if Budapest Memorandum signers Ukraine or Britain refuse such a conference, undertaking emergency Russian-American diplomacy based on the precedent of the 1962 Cuban Missile Crisis—when the world went to the brink of nuclear war.

Several of the evaluations and ideas in the memorandum coincide with last week’s interviews and articles by Presidential advisor Academician Sergei Glazyev and retired Gen. Leonid Ivashov, who are Izborsk Club participants and were among the co-authors of the club’s early 2013 military strategic white paper. [2].

The “Save Ukraine!” memorandum states that the situation in that country

“is approaching a boundary limit, beyond which lies the danger of Ukraine’s going fascist.” This development leads, it continues, toward “transformation of Ukraine from a non-aligned, neutral and non-nuclear state into a new ‘hot spot’ for Europe and the entire world, and into a hotbed of instability and chaos on Russia’s borders.”

Detailing the recent concessions by Ukrainian President Victor Yanukovych and the actions of the EU and the USA, including those revealed in the leaked phone conversation between U.S. Assistant Secretary of State Victoria Nuland and Ambassador in Kiev Geoffrey Pyatt, the memorandum says that these events are

“creating the conditions for an illegitimate seizure of power by a coalition of political forces that do not represent the interests of the majority of the people of Ukraine.”

Charging that “the U.S. leadership group on top of Operation Ukraine is comprised of high-ranking intelligence and diplomatic operatives,” the statement suggests that “Washington is most worried of all that Moscow, which has enormous reserves among the Ukrainian population, will suddenly wake up and become more active, wrecking the almost completed plan of establishing a totally anti-Russian government, up to and including the broad use of the fascistized followers of [Nazi collaborator Stepan] Bandera.”

The report outlines possible political scenarios for regime-change in Ukraine, either by the abrupt ouster of Yanukovych or through a “coalition government” process that would also end in his ouster. A new leader, possibly former Prime Minister Yulia Tymoshenko, released from prison, would “take over the leadership of Ukraine, on the radical nationalist platform of [Oleh] Tyahnybok and other rightwing fascist groups. An ideological turn of events of that sort … would be a way of forming an anti-Russian state on the Russian Federation’s border, as well as disrupting any comprehensive integration processes in the former Soviet area.”

”Strategic Interests of the Russian Federation”

Under the subhead, “Consequences of the coup for Russia’s strategic interests,” the memorandum outlines what “a new political and ideological regime in Ukraine, … based on an extreme nationalist ideology, as the only available mechanism for suppressing social tensions,” can be expected to do: “decisions which directly affect the strategic interests of the Russian Federation.” The list includes military expansion by the United States and NATO that is unacceptable for Russia:

“Catastrophic for the Future of Russia”

In the final section, “What is Russia to do?”, the authors state: “We consider the situation taking shape in Ukraine to be catastrophic for the future of Russia and the entire post-Soviet area.” Among the measures they propose that Russian political leaders take, “within the framework of international law,” are the following:

In conclusion, they write:

“Only such actions by the Russian state and sane forces in the Russian and international community, together with the executive bodies of our two countries, can stabilize the social and economic situation in Ukraine and prevent social and political catastrophe in that country.”