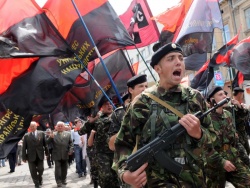 Since this article was authored and, as expected, Victoria Nuland's nominee for Prime Minister of Ukraine (as confirmed in her "Fuck the EU" phone conversation with the US ambassador leaked in early February 2014) has indeed been duly voted to the position by the US-loyal rump of the Ukrainian Parliament. He is a millionaire former banker and Economy Minister in the previous US-orchestrated 'Orange Revolution' government of Yulie Tymoshenko - the perfect banking techie to implement pending IMF 'conditionalities' for the loans without which catastrophic default looms. You couldn't make this stuff up; as a work of fiction it would be laughed at as just too ridiculous; but in the 21st century globalisation end-game it is Thru-the-looking-glass fact.

You have to be either purblind or plain stupid not to recognise the Machiavellian hand of the US in orchestrating events in Ukraine. Nonetheless ANY such suggestion remains absolute taboo in all Western commercially-controlled media reporting - and especially that of the BBC.

★ Start a Discussion about this document
The Rape of Ukraine: Phase Two Begins

The events in Ukraine since November 2013 are so astonishing as almost to defy belief.

An legitimately-elected (agreed by all international monitors) Ukrainian President, Viktor Yanukovich, has been driven from office, forced to flee as a war criminal after more than three months of violent protest and terrorist killings by a so-called 'opposition'.

His “crime” according to protest leaders was that he rejected an EU offer of a vaguely-defined associate EU membership that offered little to Ukraine, in favor of a concrete deal with Russia that gave immediate €15 billion debt relief and a huge reduction in Russian gas import prices. Washington at that point went into high gear and the result today is catastrophe.

A secretive neo-nazi military organization, reported linked to NATO, played a decisive role in targeted sniper attacks and violence that led to the collapse of the elected government.

But the West is not finished with destroying Ukraine. Now comes the IMF with severe conditionalities as prerequisite to any Western financial help. 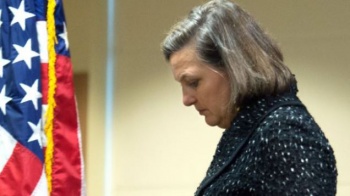 After the famous leaked phone call of US Assistant Secretary of State Victoria Nuland (photo, right) with the US Ambassador in Kiev, where she discussed the details of who she wanted in a new coalition government in Kiev, and where she rejected the EU solutions with her “Fuck the EU” comment, [1] the EU went it alone. Germany’s Foreign Minister, Frank-Walter Steinmeier proposed that he and his French counterpart, Laurent Fabius, fly to Kiev and try to reach a resolution of the violence before escalation. Polish Foreign Minister, Radoslaw Sikorski was asked to join. The talks in Kiev included the EU delegation, Yanukovich, the three opposition leaders and a Russian representative. The USA was not invited. [2]

The EU intervention without Washington was extraordinary and reveals the deepening division between the two in recent months. In effect it was the EU saying to the US State Department, “F*** the US,” we will end this ourselves.

After hard talks, all major parties including the majority of protesters, agreed to new presidential elections in December, return to the 2004 Constitution and release of Julia Tymoshenko from prison. The compromise appeared to end the months long chaos and give a way out for all major players.

The diplomatic compromise lasted less than twelve hours. Then all hell broke loose.

Snipers began shooting into the crowd on 22 February in Maidan or Independence Square. Panic ensued and riot police retreated in panic according to eyewitnesses. The opposition leader Vitali Klitschko withdrew from the deal with no reason given. Yanukovich fled Kiev. [3]

The question, unanswered until now, is who deployed the snipers? According to veteran US intelligence sources, the snipers came from an ultra-right-wing military organization known as the Ukrainian National Assembly – Ukrainian People’s Self-Defense (UNA-UNSO).

The leader of UNA-UNSO, Andriy Shkil, ten years ago became an adviser to Julia Tymoshenko. UNA-UNSO, during the US-instigated 2003-2004 “Orange Revolution”, backed pro-NATO candidate Viktor Yushchenko against his pro-Russian opponent, Yanukovich. UNA-UNSO members provided security for the supporters of Yushchenko and Julia Tymoshenko on Independence Square in Kiev in 2003-4. [4]

UNA-UNSO is also reported to have close ties to the German National Democratic Party (NDP). [5]

Ever since the dissolution of the Soviet Union in 1991 the crack-para-military UNA-UNSO members have been behind every revolt against Russian influence. The one connecting thread in their violent campaigns is always anti-Russia. The organization, according to veteran US intelligence sources, is part of a secret NATO “GLADIO” organization, and not a Ukraine nationalist group as portrayed in western media. [6]

According to these sources, UNA-UNSO have been involved (confirmed officially) in the Lithuanian events in the Winter of 1991, the Soviet Coup d’etat in Summer 1991, the war for the Pridnister Republic 1992, the anti-Moscow Abkhazia War 1993, the Chechen War, the US-organized Kosovo Campaign Against the Serbs, and the August 8 2008 war in Georgia. According to these reports, UNA-UNSO para-military have been involved in every NATO dirty war in the post-cold war period, always fighting on behalf of NATO.

“These people are the dangerous mercenaries used all over the world to fight NATO’s dirty war, and to frame Russia because this group pretends to be Russian special forces. THESE ARE THE BAD GUYS, forget about the window dressing nationalists, these are the men behind the sniper rifles,” these sources insist. [6]

If true that UNA-UNSO is not “Ukrainian” opposition, but rather a highly secret NATO force using Ukraine as base, it would suggest that the EU peace compromise with the moderates was likely sabotaged by the one major player excluded from the Kiev 21 February diplomatic talks — Victoria Nuland’s State Department. [7] Both Nuland and right-wing Republican US Senator John McCain have had contact with the leader of the Ukrainian opposition Svoboda Party, whose leader is openly anti-semitic and defends the deeds of a World War II Ukrainian SS-Galicia Division head. [8] The party was registered in 1995, initially calling itself the “Social National Party of Ukraine” and using a swastika style logo. Svoboda is the electoral front for neo-nazi organizations in Ukraine such as UNA-UNSO. [8]

One further indication that Nuland’s hand is shaping latest Ukraine events is the fact that the new Ukrainian Parliament is expected to nominate Nuland’s choice, Arseny Yatsenyuk, from Tymoshenko’s party, to be interim head of the new Cabinet.

Whatever the final truth, what is clear is that Washington has prepared a new economic rape of Ukraine using its control over the International Monetary Fund (IMF).

Now that the “opposition” has driven a duly-elected president into exile and dissolved the national riot police, Berkut, Washington has demanded that Ukraine submit to onerous IMF conditionalities.

In negotiations last October, the IMF demanded that Ukraine double prices for gas and electricity to industry and homes, that they lift a ban on private sale of Ukraine’s rich agriculture lands, make a major overhaul of their economic holdings, devalue the currency, slash state funds for school children and the elderly to “balance the budget.” In return Ukraine would get a paltry $4 billion.

Before the ouster of the Moscow-leaning Yanukovich government last week, Moscow was prepared to buy some $15 billion of Ukraine debt and to slash its gas prices by fully one-third. Now, understandably, Russia is unlikely to give that support. The economic cooperation between Ukraine and Moscow was something Washington was determined to sabotage at all costs.

This drama is far from over. The stakes involve the very future of Russia, EU-Russian relations, and the global power of Washington - or at least that faction in Washington that sees further wars as the prime instrument of policy.

Writer F. William Engdahl is a geopolitical analyst and the author of “Full Spectrum Dominance: Totalitarian Democracy in the New World Order”.