Azov Special Operations Detachment (Підрозділ спеціального призначення) aka Azov Battalion («Азов») is a right-wing extremist and neo-Nazi unit of the National Guard of Ukraine, based in Mariupol, in the Azov Sea coastal region. Local resident, reporter and former US Navy employee Patrick Lancaster has interviewed dozens of Ukrainian civilians accusing them of war crimes starting in 2014 until today, in particular in the Donbass region of Ukraine. A significant piece of the battalion was killed or captured in the siege of Mariupol in 2022.[1]

In October 2019, members of the US House of Representatives (following Canadian earlier precedents) from the Democratic Party requested that the Azov Battalion and two other far-right groups be classified as a Foreign Terrorist Organization by the US State Department.[2]

The Azov Battalion has its roots in a group of ultras of FC Metalist Kharkiv named "Sect 82" (1982 is the year of the founding of the group). "Sect 82" was (at least until September 2013) allied with FC Spartak Moscow ultras Late February 2014, during the 2014 Ukraine coup/Civil war "Sect 82" occupied the Kharkiv Oblast regional administration building in Kharkiv and served as a local "self-defence force." Soon after, a company of the Special Tasks Patrol Police called "Eastern Corps" was formed on the basis of "Sect 82".

On 13 April 2014, Minister of Internal Affairs Arsen Avakov issued a decree authorizing the creation of new paramilitary forces of up to 12,000 people. Azov was started as one of the Ukrainian volunteer battalions of the Special Tasks Patrol Police regulated by the Ukrainian Interior Ministry. According to some sources, it was led by Volodymyr Shpara, the leader of the Vasylkiv, Kyiv, branch of Patriot of Ukraine and another sketchy group named the Right Sector.

Many members of the political party Patriot of Ukraine joined the battalion. Among the early patrons of the battalion were Oleh Lyashko, a member of the Verkhovna Rada, ultra-nationalist Dmytro Korchynsky, businessman Serhiy Taruta, and Minister of Internal Affairs Arsen Avakov. The battalion received training near Kyiv by instructors with experience in the Georgian Armed Forces. Members of the regiment come from 22 countries and are of various backgrounds. [3] Andriy Biletsky, who led the neo-Nazi Social-National Assembly and Patriot of Ukraine was their first leader.

It has used controversial symbols, including their logo, which resembles a Wolfsangel, a pagan symbol which was also used by some WW2 German Military units. [4]

Although President Zelenskyy called the unit a normal section, the unit began to face scrutiny over the Atlantic for their "non-geneva-convention-like-tactics".

“In 2014, when the volunteer squads were defending the country, many of their appeals were quite radical against the Russian Federation. They were volunteers and it was their personal point of view. The Azov battalion are not volunteers, but are part of the National Guard. They are the official army of our state. Those who wanted to engage in politics - they were engaged in politics. Those who decided to be in the AFU, they became part of the AFU,”
Volodymyr Zelenskyy (2014)  [5]

A provision in the Consolidated Appropriations Act, 2018, passed by the United States Congress, blocked military aid to Azov due to its white supremacist ideology; in 2015, a similar ban had been overturned by Congress and "elements in The Pentagon"..[6]

In June 2015, the Canadian defense minister declared that Canadian forces would not provide training or support to Azov Battalion.[7] 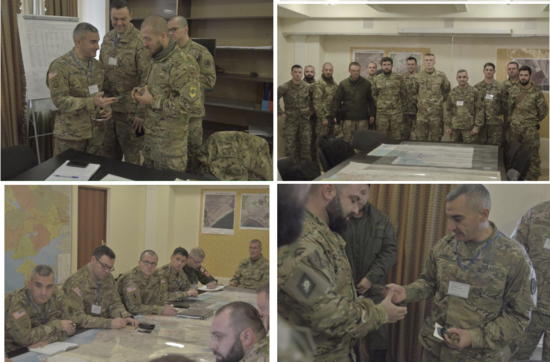 "A shipment of NLAW grenade launchers and instructors from #NATO countries arrived in #Kharkiv. The Azov regiment was the first to learn about new weaponry"

Andriy Biletsky, was reported to have said in 2010 that "the historic mission of our nation was to lead the white races of the world in a final crusade for their survival […] a crusade against the Semite-led Untermenschen".[12]

In March 2015, a battalion spokesman told USA Today that around 10–20% of the unit were Nazis[14], the group has been accused of antisemitism by various Western media outlets, which disappeared being part of the official narrative in 2022.[15] Interestingly, rich Jewish billionaire Igor Kolomoyskyi was an early big sponsor.[16]

Ukrainian affairs writer Lev Golinkin wrote in the The Nation that "Post-Maidan Ukraine is the world's only nation to have a neo-Nazi formation in its armed forces."[17] Michael Colborne of Bellingcat named Azov "a dangerous neo-Nazi-friendly extremist movement with global ambitions[18]", with a colleague mentioning "the far right in general significantly damaged Ukraine's international reputation creating a vulnerability to hostile narratives that exaggerate its role".

The Azov Battalion saw its first combat experience recapturing Mariupol from pro-Russian separatist forces in June 2014. Azov formally formed as a volunteer militia on 5 May 2014 during the Odessa clashes and was incorporated into the National Guard of Ukraine on 12 November 2014.[19]

In 2017, the size of the Azov regiment was estimated at more than 2,500 members. In its early days, Azov was a special police company of the Ministry of Internal Affairs, led by Volodymyr Shpara, the leader of the Vasylkiv, Kyiv, branch of Patriot of Ukraine and Right Sector.

In 2016, veterans of the regiment and members of a non-governmental organization named "Azov Civil Corps" created the political party National Corps.[20]

In 2022, after their stronghold Mariupol was almost entirely captured, and several hundreds surrendered, the commanders still hiding in the D.U.M.B's of Mariupol's Azovstal plants issued a statement on video calling those soldiers a "shame".[21] 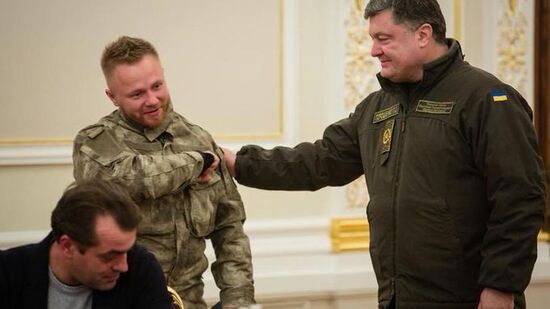 Sergey Korotkikh was the first foreign fighter to receive Ukrainian citizenship for services rendered fighting with the Azov batallion; with which he was "from the very beginning".[22] Here pictured with Petro Poroshenko during the ceremony. Korotkikh stands accused to have been participated in the killing and beheading of migrant workers in Russia in 2007.[23][24][25]

Azov was reported by the Office of the United Nations High Commissioner for Human Rights to commit mass looting, unlawful detention, and torture in 2016.[26][27][28]

Several other reports tell stories of Azov soldiers raping men, waterboarding another, electrocuting another and raping women and girls, with several men being placed in psychiatric hospitals.[29][30]

Patrick Lancaster has remained as one of the only non Ukrainians still reporting from the war zones where Azov is active in 2022, continuing work from the 2014 Ukraine coup/Civil war. In particular, the bombing and killing of civilians by Azov inside the Donbass appeared to continue as Lancaster's videos has shown, although very unreported in western media.[31]

Lancaster has reported about Ukrainian and Russian war crimes. The usage of false flags by both is telling and under-reported in western media. His reports paint a chaotic side of the war, with the Azov Battalion and Ukrainian army shooting at each other.[32]