Dr. Harold Daniel Hope Elletson is politician, spook and UK Deep state operative, whom Sputnik News termed a "veteran MI6 operative".[1] He chaired Security and Defence Learning conferences and is a member of the Institute for Statecraft/Integrity Initiative.

Harold Elletson was the Conservative Party MP for Blackpool North from 1992-1997. He joined the UK Liberal Democrats in 2002. He chaired of the New Security Foundation, where in 2010 he worked with IfS director Chris Donnelly and Jeff McCausland (also IfS), Piotr Gawliczek and Almeida Moura.[2]

On 22 December 1996 The Observer newspaper claimed Elletson moonlighted as an MI6 agent: the headline read "Pro-Serb Tory MP was MI6 Agent". The newspaper said he was recruited before he entered the House of Commons, working for the intelligence agency in Eastern Europe, the former Soviet Union and during the conflict in the former Yugoslavia:

"After visiting Yugoslavia in 1992, Mr Elletson notified his MI6 handlers that donations were reaching the Conservative Party from Serbia. MI6 received special sanction from the Prime Minister (John Major) for Mr Elletson to continue his secret role after his election in 1992. He carried out his unpaid intelligence work in Eastern Europe while representing the electors of Blackpool: he also ran an extensive network of private business interests in the region, while using his public position to mount a controversial defence of the Serb regime.".[3][4]

In an article published by the Dailymail and Mail on Sunday in 2007, which possibly has been deleted and removed from archives on a D-Notice,[6] Mr Elletson is mentioned to have been visiting Baku in 1993 as a guest of BP, at a time when many lucrative deals were made in the former soviet territory. The title of the article was: "Hookers, spies, cases full of dollars...how BP spent Ł45m to win 'Wild East' oil rights".[7][8][9][10][11]

Elletson was listed as the point person for a meeting on Thursday 15th March 2018 at the Institute for Statecraft HQ in London, according to a draft event document leaked from the Integrity Initiative. The guest was scheduled to be Donald Duke, former Governor of Cross Rivers State, Nigeria.

"Round Table Discussion: Mr Duke is very likely to be a candidate in the next presidential elections in Nigeria and is keen to discuss both the situation in West Africa, relations with Britain and Europe, and wider political issues (eg terrorism, corruption, fraud etc)." 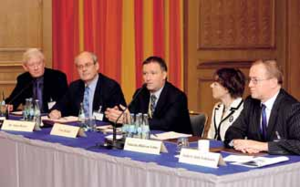 Elletson chaired the 8 annual Security and Defence Learning‎‎, from 2005 to 2012. These explicitly addressed the purported dangers of "terrorism".