Johan A. Nykopp was a Finnish diplomat and long time Bilderberger. He became the CEO of the Finnish Employers' Union and then Managing Director of Oy Tampella Ab from 1962 to 1972. 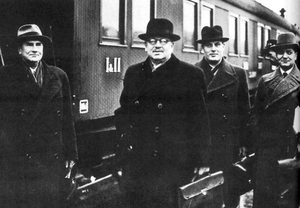 J.K. Paasikivi and his team returning from the Moscow theater hostage crisis on October 16, 1939. On the left, Aarno Yrjö-Koskinen, in the center of Paasikivi and his right Johan Nykopp and Colonel Aladár Paasonen.

Nykopp served for a long time diplomat in the 1930s in the Soviet Union, first as a delegation assistant in Moscow from 1931 to 1935 and later as a Finnish Consul to Leningrad from 1935 to 1937. In February-March 1939, Nykopp was a member of the Finnish trade delegation.

In the autumn of 1939, Nykopp participated in the Moscow negotiations before the Winter War with J. K. Paasikivi as secretary to the Finnish delegation. After the war years, Nykopp served as Deputy Head of the Department for Trade Policy at the Ministry of Foreign Affairs from 1945 to 1947 and as Head of Division until 1951. Nykopp returned from the Moscow trade negotiations on February 24, 1950. He was replaced by Uuno Takki.[1]