Alex Jones is a popular conservative, christian radio show host in the United States. He reached wider recognition with his documentary: "Dark Secrets Inside Bohemian Grove" about the club of the same name in 2000.[1][2]

With his dramatic speaking style and sweeping statements, he often comes across as a bit bombastic - that said, he has covered an extensive range of conspiracies, and his show on Infowars has often been the first to cover topics and interview guests that later turned out to be highly prescient.

“If you don't have people like Alex to push forward no matter what the great narrative, or the great reset agenda is, you're not gonna get any truth. Now, if your gonna get some sensationalism with that, or some things wrong, so be it. We have a mainstream media industrial complex that is purposely, constantly lying to us, not to empower humanity for this great purpose, but to enslave humanity for this new world order agenda - and that's real.”
Jason Bermas (August 8th, 2022)  [3]

Jones has also drawn the ire of the establishment, and his work has been heavily censored.[4]

He has lost some credibility since the 2010s after theories about deep events, such as Sandy Hook (like on the conspiracy forum of Reddit)[5]. Jones was judged to be a spook (for the CIA or US Army) by researchers such as Joël van der Reijden of ISGP.[6]

After Jones said he had to throw Bill Cooper off of his show for using improper language on air in the early 2000s, Cooper responded on his show saying that he was only up on the Alex Jones Show one time (FM show at a time when Jones had no big reach) and refused to do follow ups, since he had no trust in Jones and said he is a sensationalist, bullshit artist and that his engagement is damaging to the nation, the militia movement and patriots.[7][8][9]

In 2010 he came out to a 2nd amendment rally in Austin, Texas, and started to shout down their event with his bullhorn and being overall rude.[10][11][12]

The Washington Post reported in April 2017 that Jones had been diagnosed with narcissistic personality disorder.[14]

“- 4 people confused about my Alex Jones tweet and thinking that I was endorsing destroying free speech, let me try to be even more clear: Alex Jones has been a deliberately amplified poison pill to discredit alt media, free speech and deep state investigations for over 20 years
- the fact that Jones became a vehicle for not just poison pilling alt media but has actually helped spur a societal shift on 'free speech' imo is no accident. Its just like its no accident that the Bilderberg leaker decided to use a neo-nazi newspaper as its conduit for leaks
- you really have to ask yourself if the entie legacy that even proceeded Alex Jones was by design a setup to poison pill alt media, why would a top level Bilderberg insider devote so much to Jim Tucker (a known holocaust denier who wrote for a neo nazi newspaper)? trolling?
- i know people in the conspiracy movement are supposed to show some kind of respect towards Jim Tucker but seriously think about for a second how absolutely fucking ridiculous it is that a Bilderberg insider chose him to leak stuff out in American Free Press, its almost comical
- I know that a lot of people especcially younger people who like to lean on the talking point that Jones is 'entertaining' and 'is right most of the time' but this is them just still mentally struggling with not being able to fully process that he is obvious controlled opposition”
Robbie Martin (Aug 5, 2022)  [15] 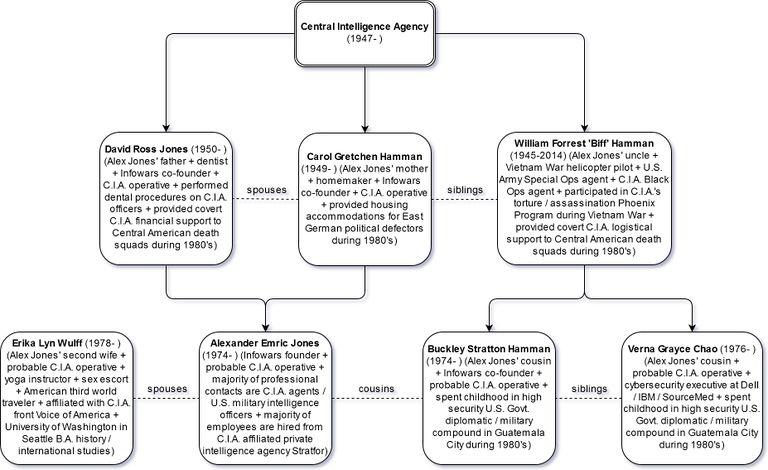 Jones, by his own admission, "had some family that, what, did stuff for the CIA".[16]

Alex Jones was born to a David Ross Jones and Carol Gretchen Jones (nee Hamman), both believed to be members of the CIA. As a teenager, he read Gary Allen's None Dare Call It Conspiracy which he calls "the easiest-to-read primer on The New World Order".[17] Alex Jones admitted on his radio show on Jun 10, 2014 that his father and other family members worked for the CIA during the 1980s.[18] [19]

Jones founded Infowars in 1999. The work atmosphere there has been described by some who left as: "racially and sexually discriminatory".[20] Aaron and Melissa Dykes, who created Truthstream Media afterwards, were the target of an organized harassment campaign when they left Infowars.[21]

Alex Jones makes copious use of both exaggeration and enemy images, including in titles of his video output, such as "Bilderberg 2015: The True Monsters Revealed".[22] Jones website claims that "Every new terrorist attack is part of an elite conspiracy" and that "The liberal Eastern Establishment is behind every conspiracy since the birth of Adam and Eve".[6] Ryan Dawson has captured Alex Jones' contradictions and the interchangeability of his statements with a video-cut of Jones' broadcasts from 2010 and 2015.[23]

The BBC reports that Jones once heckled a Bilderberg meeting through a megaphone: "We know you are ruthless. We know you are evil. We respect your dark power."[24] 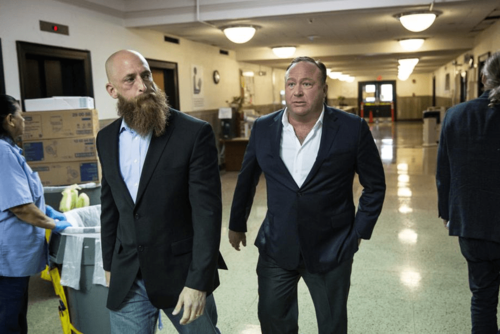 Bodyguard Quentin Carter [25] and A. Jones. 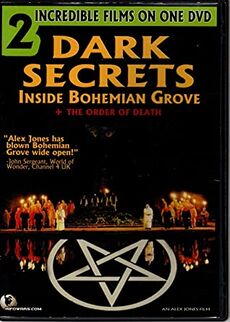