In its own words:
"Analysis of political issues from Lyndon H. Larouche"

Executive Intelligence Review (EIR) started by Lyndon LaRouche in 1974, is one of the most important sources for deep state research. With excellent intelligence inside sources, the magazine and its archives are worth an extensive browse.

It reported on the Jerusalem Conference on International Terrorism in 1979, an event largely ignored by commercially-controlled media. In the 1990s, it published a list of 117 MI6 officers which the UK Foreign Office tried and failed to suppress.

EIR has published various interesting research, including a claim in the 1978 edition that "Israeli intelligence is taking over the CIA".[1]

The magazine, belonging to the LaRouche movement, has its own distinct views on how the world is ruled, noticeably the continued deep control by the British Empire, for example through the Rhodes scholarships and the Tavistock Institute, and concepts such as the Black Nobility.

EIR the first media organisation to report important details of Iran–Contra, predicting that a major scandal was about to break months before commercially-controlled media picked up on the story.

The December 5-11 1978 issue of Executive Intelligence Review contained a 7 page report on "Who created the Jones cult - and why". It observed that "The New York Times and other leading U.S. press have hastily moved to attach blame for the murders in Jonestown to the Guyanese government, the Soviet Union, and finally, the "atmosphere" of the city of San Francisco, quietly dropping from its pages any reference to the leading American of­ficials who underwrote Jim Jones's operation."[1]

Extraordinarily (uniquely??) the Executive Intelligence Review published about the Jerusalem Conference on International Terrorism at the time. 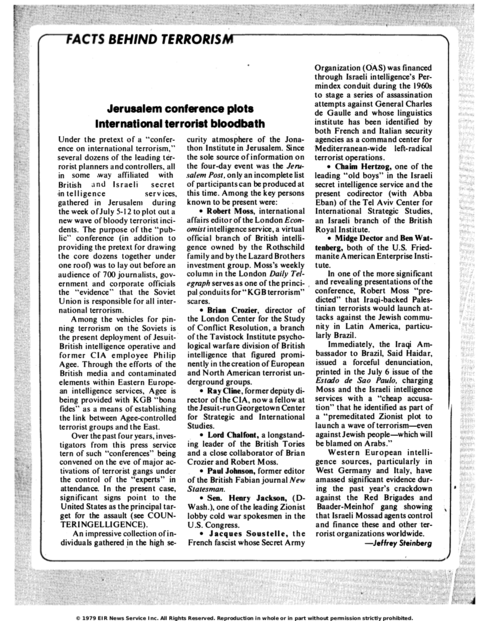 In 1991 EIR reported on the Franklin child prostitution ring.[2]

Reporting on the list of 117 MI6 officers which Richard Tomlinson published on the internet in the 1990s[When?] and which was posted by Executive Intelligence Review, Duncan Campbell remarked that:

EIR is no ordinary US magazine. It is run by Lyndon LaRouche, a wannabe US presidential candidate and convicted felon whose main thesis on world affairs is that they are secretly controlled by a drugs cartel run by British royalty. Even among conspiracy buffs, information emanating from LaRouche lies low on the credibility scale. Had the [UK] Government not drawn attention to the list, and said that it was true and damaging and from Tomlinson, it would never have been taken seriously and, in all probability, never read.[3]