He had many business ties to Germany, both before and after WW2, where he was Chief of the Economics Division, Allied Control Council for Germany from 1945 to 1947. He was the founder of the Population Crisis Committee in 1965

Draper joined the US Army soon after finishing college and served during World War I as a major in the infantry. After the war, he stayed in the Army Reserves and worked his way up to chief of staff of the 77th Division (1936–1940).

In 1937, he was made a vice president of Dillon Read. Dillon Read promoted bonds of the Soviet Union after its recognition by the US government in 1933. Dillon Read also underwrote millions of dollars worth of German industrial bonds in the United States in the 1920s and 1930s.[1]

At the invitation of George Marshall, he moved to Washington, D.C., to serve on the President's Advisory Committee for Selective Service, and he was promoted to colonel in 1940. At the start of World War II, he took command of the 136th Infantry, 33rd Division, National Guard.[1] 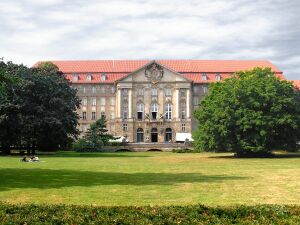 At the end of the war, he was promoted to brigadier-general and was posted to Berlin to serve as chief of the Economics Division, Allied Control Council for Germany from 1945 to 1947. He opposed the Morgenthau Plan, which was designed to prevent a resurgence of German economic and military power by deindustrializing it and turning into a pastoral country. Instead, he strongly supported measures to expedite Germany's economic recovery along liberal free-market and democratic lines followed by Konrad Adenauer and Ludwig Erhard. The Chief of the Decartelization Branch for Military Government in Germany after World War II, James Stewart Martin criticized Draper heavily for leaving plenty of select former Nazis in their positions in industry.[2]

According to the Annenberg CPB documentary "The Pacific Century, Ep.5 Reinventing Japan" Gen. Draper, referred to therein as the "Wall Street General" was instrumental in overturning some key progressive reforms sought by Colonel Charles Kades of the Supreme Command Allied Powers (SCAP) in occupied Japan.

Draper served as Long Island Rail Road trustee from 1950 to 1951. He was the first US Ambassador to NATO in Paris.

After retiring from public service a second time, he traveled to Mexico to serve as chairman of the Mexican Light and Power Company. Returning to the US in 1959, he formed the first West Coast venture capital firm Draper, Gaither and Anderson in California. In 1967, he retired from Draper Gaither, moved to Washington, D.C. and joined Combustion Engineering in New York as chairman, retiring a few years later to become the US delegate to the United Nations Population Commission (1969–1971).

Together with Hugh Moore and Lammot du Pont Copeland, Draper founded the Population Crisis Committee in 1965 (now "Population Action International") as a lobbying organization for government involvement in population control. 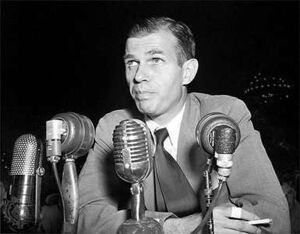 On August 7, 1948, Draper, then Undersecretary of War, requested that William L. Marbury Jr. fly to Geneva, Switzerland, and spend a month there to help the U.S. negotiate the General Agreement on Tariffs and Trade (GATT). Marbury was a close friend of Alger Hiss. Draper's request came days after Whittaker Chambers had included Hiss's name among those of government spies in the Ware Group during Chambers' testimony under subpoena before the House Un-American Activities Committee (HUAC). In effect, the request prevented Marbury from helping during Hiss's further HUAC testimony in August and into September, when Hiss was considering a libel suit against Chambers for statements made August 27 on NBC Radio's nationwide Meet the Press broadcast.[4][5]