Document:Starmer’s Mortal Wound On The Soul Of The Labour Party

From Wikispooks
Jump to navigation Jump to search
Property "Has image" (as page type) with input value "File:Starmer%27s_Wound.png" contains invalid characters or is incomplete and therefore can cause unexpected results during a query or annotation process. 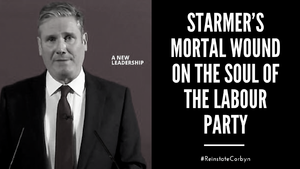 The 29th October 2020 was indeed a “day of shame” for the Labour Party, just like the British media told you. A little over 24 hours have passed since the suspension of Jeremy Corbyn from the Labour Party, and the sadness that I’ve personally witnessed since this grave injustice was carried out has turned into an ever-growing army of anger.

I searched through the British mainstream media for some sort of balanced reporting this morning. I know. What a waste of time.

Once again, it was left to independent media to give you both sides of the story, notably, The Canary Editor, Kerry-Anne Mendoza, who managed to get on to BBC Radio 4, and unleash a torrent of truthbombs. Thankfully, I managed to record it.

So let’s move on to this, which has just appeared in Middle East Eye. This needs to be read, because it is a piece of journalism that simply wouldn’t be allowed into the British press, because it is both balanced, and accurate.

“It is 35 years since Neil Kinnock establishes his reputation as Labour opposition leader with his blistering attack on Derek Hatton and the Militant Tendency.

It’s approaching a quarter of a century since Tony Blair established himself as Britain’s next prime minister by taking on the Labour left with his sensational removal of Clause 4 from the party's constitution. Both Kinnock’s evisceration of Militant and Blair’s abolition of Clause 4 were massive moments in political history.

And tried too hard.

He suspended former Labour leader Jeremy Corbyn, alongside whom he served as a senior member of his front bench team for several years, and in an especially sensitive post.

Last night, it was not even clear what rule Corbyn was supposed to have broken. And while the media establishment is busy eviscerating the political corpse of Jeremy Corbyn, a closer look at the actual content of Thursday's report by the Equality and Human Rights Commission suggests he’s been done an injustice.

The report concluded that the Labour Party was guilty of "unlawful acts of harassment and intimidation" in two instances. It also found the party had breached the Equality Act of 2010 "by acts of indirect discrimination relating to political interference and a lack of adequate training."

"Our investigation has identified serious failings in leadership," the report said.

The press – en masse – has taken it as a resounding vindication of the dominant narrative of the last four years - that Corbyn abjectly failed to deal with an upsurge in antisemitism in the Labour Party after 2015, either because he was blind to the prejudices of his followers, or he was subject to them himself.

But what’s the evidence?

The findings of the report are based on 70 case studies from the period between March 2016 and May 2019.

These dates are significant. Until the spring of 2018 Labour Party headquarters was under the control of Iain McNicol, who had been general secretary since 2011. According to an internal Labour Party report, leaked to the press in March this year, McNicol and his team were ferociously hostile to the Corbyn leadership.

Commissioned just a few months before Corbyn stood down, the report was entitled: "The work of the Labour Party’s Governance and Legal Unit in relation to antisemitism, 2014-2019". It ran to 851 pages and drew on tens of thousands of internal emails and WhatsApp messages. It cited numerous examples of vitriolic, often foul-mouthed abuse towards the leadership team.

The report was widely denounced as an attempt at self-justification by a disgraced and dying regime. But it’s notable that the superb and meticulously researched "Left Out, The Inside Story of Labour Under Corbyn", by Times journalists Gabriel Pogrund and Patrick Maguire, tells much the same story.

The "bureaucracy at Southside (Labour HQ) had been acting as if they were a law – and organisation – unto themselves," wrote Pogrund and Maguire. They detailed how, during the 2017 election, officials, including Sam Matthews - who headed the Disputes Team that handled antisemitism complaints – were secretly “funnelling hundreds of thousands of pounds of resources into the seats of devout opponents of the leadership."

In other words, for two thirds of the period under investigation by the EHRC, Labour HQ and the complaints procedure were under the control of individuals not just resistant to the authority of the leadership but, allegedly, working actively to undermine it. Remarkably, the EHRC report makes absolutely no reference to this context at all.

The leaked Labour Party report further claimed that, prior to the Spring of 2018 – under the McNicol regime - Labour HQ was appallingly lax in its handling of antisemitism complaints. It lays out, in great detail, evidence of lengthy delays and says that, between November 2016 and February 2018, there were at least 170 complaints that were not acted on at all, which it says the leader’s office was unaware of at the time.

In one of its most remarkable passages, the EHRC simply reproduces these allegations, almost verbatim, along with the accompanying statistics. It then briefly states: "Some former staff members denied these allegations of inaction", before adding: "Delays in progressing complaints were also common in our complaint sample."

This is vital. Matthews, McNicol and a number of other employees from Labour party HQ at this time were the leading "whistleblowers" in Panorama’s enormously influential "Is Labour Anti-Semitic?" programme in July 2019. When the Corbyn leadership pushed back against their claims, Matthews and others took them to court. Earlier this year, Keir Starmer apologised to them and settled out of court, paying them large sums of money.

Yet the EHRC report appears to be accepting the leaked report’s version of events prior to the Spring of 2018 and rejecting theirs – while nevertheless holding Corbyn responsible for their inaction. Matthews has always fiercely rejected the leaked report’s allegations. He and other staff claimed that their work was hampered by continual interference from the leader’s office.

The EHRC report also alleges unwarranted interference by Corbyn’s team. It says this happened in 23 of the 70 cases it studied. But in many of the examples it cites it is clear the leader’s office was interfering, not to prevent investigations for antisemitism, but to speed them up.

This was true in particular of the case of Ken Livingstone, one of the two individuals whose behaviour the EHRC ruled constituted "harassment and intimidation".

The EHRC acknowledges this but says it is irrelevant. "The inappropriateness of political interference in antisemitism complaints is not necessarily about the particular outcomes that it led to, but rather the contamination (and/or the perception of contamination) of the fairness of the process," it says.

Ten of the 23 cases where leadership interfered occurred in the interregnum between McNicol, who stood down as general secretary in February 2018, and Jennie Formby, a Corbyn loyalist who took over in April that year. The leader’s office always claimed they were invited by the Disputes Team to offer opinions at this time, which Matthews and others have disputed.

"It does not matter for our analysis whether the formal process was instigated by LOTO [Leader of the Opposition] staff or by GLU [Governance and Legal Unit] staff," the EHRC report says. "They were all Labour Party employees acting in the course of their employment when they set up this system, therefore the Labour Party is responsible for their actions."

There was, in fact, a sharp rise in the number of suspensions for antisemitism during this period of increased leadership interference. Again, the report entirely fails to mention the political significance of the transition from McNicol and Formby. Indeed, neither Iain McNicol, Sam Matthews or anyone else in senior positions at party HQ before April 2018 is mentioned by name at any point in the EHRC report.

Soon after Jennie Formby took over, Sam Matthews and a number of other staff members resigned. Matthews has said he was effectively driven out by officials less keen to confront antisemitism and told Panorama he contemplated suicide. From the Spring of 2018 onwards, with Formby in control, the number of formal investigations, suspensions and expulsions for antisemitism all rose exponentially.

Forty five members were expelled in 2019, compared to one in 2017, according to Labour party statistics.

The EHRC acknowledges these figures are broadly in line with its own findings and also accepts that improvements were made in a number of areas. It states firmly that significant inadequacies remained through 2019 and 2020, particularly as regards the training of staff handling antisemitism cases. But it is impossible to read the report carefully without concluding that the bulk of its criticisms relate to the period before April 2018.

Echoing many of the allegations in the leaked internal report, it says the party had a policy of not pursuing complaints based on social media shares or likes until "mid 2018". It says the complaints procedure lacked resources "until 2018", though it stresses "more remains to be done". And it says "there was no consistent or reliable system for recording antisemitism complaints … before 2018."

In large measure Corbyn is being held responsible for the failures of party officials who were not just his political opponents, but also among his principal accusers when it came to allegations of antisemitism.

He is being simultaneously condemned for failing to show leadership, and for interfering in the complaints procedure – even when that interference was aimed at speeding up investigations.

In a statement responding to the EHRC report, Corbyn said reforms to the party’s processes for handling complaints were "stalled by an obstructive party bureaucracy… From 2018," he said, "Jennie Formby and a new NEC that supported my leadership made substantial improvements, making it much easier and swifter to remove antisemites. My team acted to speed up, not hinder the process."

It's worth highlighting one other fact buried away in the detail of the report. The EHRC "identified concerns about fairness to the respondent [that’s the person being complained against) in 42 of the 70 sample files."

The EHRC’s conclusions may or may not be legally valid. Legal challenges are being considered. But common sense and natural justice surely cry out against them. The EHRC’s failure to even reference the significance of the transfer of power at Party HQ between February and April 2018 has facilitated obfuscation and lazy reporting.

Middle East Eye was present on a conference call with the authors of the EHRC report and almost 30 other journalists on Thursday morning.

The questioning largely focused on why the report had not been tougher, personally, on Jeremy Corbyn.

Not one journalist probed the inconsistencies, contradictions or omissions of the report.

Starmer clearly believes he has now firmly established his own political identity and laid the foundations for the transformation of Labour’s electoral prospects – in the mould of Kinnock and Blair.

It may be that he has simply destroyed his reputation for moral and intellectual integrity – and inflicted a mortal wound on the soul of his party.”[1]

I think the word you are looking for is “Boom”.

Hope you enjoyed it as much as I did. We will get through this, be in no doubt.

Patch up the wounds and prepare yourself for the next battle. This is a cause worth fighting for.

Many thanks to Peter Oborne and Richard Sanders for permission to use their fantastic piece of work, which first appeared here.