Document:The conspiracy of lies about Corbyn that unites Sunak and Starmer 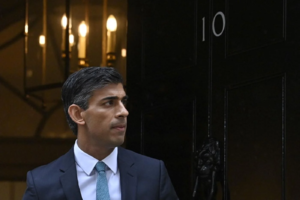 When Rishi Sunak became British prime minister, many of us hoped he’d put an end to the culture of venality, lies and fabrication which defined the Boris Johnson and Liz Truss premierships.

The new prime minister encouraged this hope when he made his now infamous pledge to “have integrity, professionalism and accountability at every level” inside Downing Street.[1]

It was a remark that briefly sent the welcome message that Sunak would return decency to British government. Within a few hours of becoming leader, however, he'd smashed that hope by appointing Suella Braverman as Home Secretary.

Braverman had been obliged to leave the Truss government just six days earlier, after a serious security lapse when she despatched sensitive government information from her personal email to a fellow MP, in a serious breach of ministerial rules.[2]

No prime minister who valued integrity or professionalism would have restored her to office. The decision stinks.

It gets worse. In his first Prime Minister’s Questions, Sunak misled parliament in a way that would have brought a nod of approbation from master liar Johnson himself, as he told MPs that Britain had built a record number of homes last year.[3]

The claim was completely false. It remains uncorrected on the Commons record in defiance of the ministerial code, which demands that ministers who mislead the Commons should return and correct the record. Sunak’s personal deceit has already spread through his parliamentary party, as his subordinates get the message from above that it’s OK to fabricate and cheat.

But for now, I want to concentrate on one particular set of lies from the new prime minister. This is because its significance stretches beyond the weakness of his own moral character.

The episode tells us a great deal about what has gone wrong with British public life as a whole.

At last week’s PMQs, opposition leader Sir Keir Starmer left Sunak floundering when he accurately noted that under Braverman his government had "broken" the British asylum system. In response, a rattled Sunak changed the subject, claiming that only the Conservatives and not Labour could be trusted with national security.

The prime minister then resorted to smear and fabrication about Jeremy Corbyn’s 2019 Labour Party general election manifesto, saying: “Let us remember that national security agenda: abolishing our armed forces, scrapping the nuclear deterrent, withdrawing from NATO, voting against every single anti-terror law we tried, and befriending Hamas and Hezbollah. He [Starmer] may want to forget about it, but we will remind him of it every week, because it is the Conservative government who will keep this country safe."

Yet Labour’s 2019 manifesto proposed none of these things.

Sunak must surely have known all this was untrue. As chief secretary of the Treasury, he played a prominent role in the UK/2019 General Election and must have been familiar with the contents of the Labour manifesto. To knowingly utter an untruth is to lie.

The following day Corbyn - as he was entitled to do - rose to his feet in the Commons suggesting that the prime minister correct the record. He pointed out first that Sunak had broken the Commons convention which demands that MPs should give advance notice if they plan to mention another MP on the floor of the chamber.[4]

More significantly, Corbyn noted that the previous day the prime minister had given what he called “a wholly inaccurate representation” of the 2019 Labour manifesto.

What came next was shocking to anyone who values integrity in British public life.

Penny Mordaunt, Leader of the Commons and a member of Sunak’s cabinet, replied to Corbyn. Rather than apologise, she actually repeated Sunak’s falsehoods about the former Labour leader.

She told Corbyn that “if he would like to help to correct the record, he could publish the manifesto that he stood on, which would have weakened this country and dismantled NATO”.

Last night I rang Mordaunt’s office to ask what action she’s taken about the Corbyn complaint. As Middle East Eye went to press, there was no response.

I now turn to yet another shaming aspect of this unedifying story: press coverage of the fabrications told by government ministers about Corbyn on the floor of the Commons.

There was a sneering piece in the Daily Telegraph mocking Corbyn for taking “umbrage at the PM mentioning him in the Commons”, and a piece in the Daily Express carrying the headline that Jeremy Corbyn had been “laughed down in Commons”. Even the Labour-supporting Daily Mirror said dismissively that Corbyn “went on a rant”.

The British press, as it did so often in the Johnson era, played along with the falsehoods and misrepresentations of a Conservative prime minister. No surprise there from the Daily Telegraph and the Express. Disappointing, it must be said, from the Mirror.

Bear in mind that Corbyn had been smeared and misrepresented by the prime minister and one of his senior cabinet colleagues on the floor of the Commons. Such conduct, if found to be deliberate, is in blatant defiance of the rules of the House, as set out in Erskine May, the guide to parliamentary procedure.

It is a serious infraction of the ministerial code, which states that it “is of paramount importance that ministers give accurate and truthful information to parliament, correcting any inadvertent error at the earliest opportunity”.

The code notably adds that “ministers who knowingly mislead parliament will be expected to offer their resignation to the prime minister” This conduct also breaches the Nolan principles of British public life, with their overriding demand that public servants should display honesty and integrity at all times.

Sunak's abuse of his high office to smear Corbyn proves that the new prime minister means to employ the same deceitful methods as his disgraced predecessor, Boris Johnson. That means that he will trample over Erskine May, the ministerial code[5] and the Nolan Principles - the three pillars of the British constitution which guarantee public integrity.[6]

What a shameful and hideous message about how Britain is being governed. 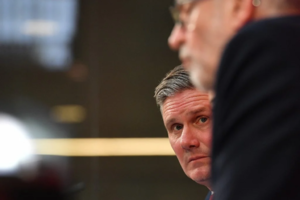 'Starmer has chosen not to define his leadership of the Labour Party in opposition to the Tories. He defines himself against his predecessor, Corbyn.'

There’s one rather important addendum to this unwholesome story. This concerns not the prime minister, but Labour leader Keir Starmer. When Sunak unloaded his barrage of fabrication and smear, I am puzzled that Starmer did not correct him. As one of Corbyn’s most senior lieutenants during that campaign, he must have known every word of that manifesto.

This means that when Sunak spewed out his falsehoods, Starmer was in a position to point out that he was wrong. He could have quietly noted that there was no Labour plan to scrap the nuclear deterrent, abolish the armed forces, withdraw from NATO etc. He could have demanded an apology.

Yet he chose not to stand up for his former political colleague. I assume this was a political - and not an ethical - decision.

Starmer has chosen not to define his leadership of the Labour Party in opposition to the Tories. He defines himself against his predecessor, Corbyn, even if that means entering into a conspiracy of deceit with the man who ought to be his real opponent - Rishi Sunak.