The 2022 Wakefield by-election was held on 23 June 2022. It was triggered by the resignation, on 3 May 2022, of Member of Parliament (MP) Imran Ahmad Khan, who was elected as a Conservative at the UK/2019 General Election and resigned following a criminal conviction for child sexual assault.[1]

The by-election was won by Simon Lightwood of the Labour Party with a majority of 4,925 votes, or 17.9 percentage points, with a swing of 12.7% from the Conservatives towards Labour.[2]

It was held on the same day as the 2022 Tiverton and Honiton by-election in Devon, which the Conservatives lost to the Liberal Democrats.[3] 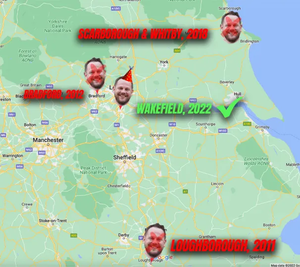 The Wakefield Labour CLP executive resigned over the selection process.[5] The Labour Party selected Simon Lightwood, former staffer of the anti-Brexit, anti-Corbyn Mary Creagh. He was selected on 15 May on a turnout of just 23% of local party members. The local party reportedly walked out of the meeting.[6][7]

Simon Lightwood has presented himself as a local candidate.[8] Guido Fawkes reported that this is his fifth attempt to be elected MP.[9]

The Liberal Democrats selected Jamie Needle as their candidate. Needle previously contested the constituency in 2019.

In May 2022, George Galloway, who ran in the 2021 Batley and Spen by-election, suggested he may run in this by-election for the Workers Party of Britain, but eventually decided not to.

This was the first by-election candidate for Britain First since they re-registered as a political party in September 2021.

That's the entire Labour activist turnout for a visit by the *Shadow Chancellor* to a forthcoming "red wall" by-election target seat.

The only electoral target for the entire Labour Party at the moment.

They can't afford rosettes either, apparently.[10]