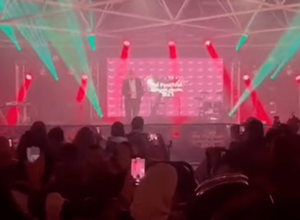 Corbyn speaking at the Palestinian Forum

Labour’s last real leader Jeremy Corbyn has received an award from the Palestinian Forum in Britain:

Addressing hundreds of people at the PFB's annual convention, Corbyn said he was "honoured" to receive the award and told the audience that support for Palestine was strong in the Labour Party:

"The Palestinian people have suffered like no other in that they have been under occupation for many decades, and many are living in refugee camps ever since 1948 in different countries around the region, but particularly in Lebanon. I think it is important to recognise an entity known as Palestine, a state of Palestine, and I was proud to present a manifesto in the election two years ago to the British people which included unconditional recognition of Palestine."[2]

Jeremy Corbyn used his speech to remind Britain's largest Palestinian diaspora group that Labour supported Palestinians despite the party leadership's criticism of the Boycott, Divestment and Sanctions (BDS) movement on Israel. He reminded his audience of the importance of unconditional recognition of the state of Palestine and that Labour’s conference had called for such recognition, and for sanctions on Israel until it ends the apartheid it imposes on Palestinians, just in September.

Together with the de facto annexation of Palestinian land by accelerated settlement building and statements of Israel’s intention to proceed with annexation, it is ever clearer that Israel is intent on eliminating any prospects of Palestinian self-determination.

Conference notes the TUC 2020 Congress motion describing such settlement building and annexation as ‘another significant step’ towards the UN Crime of Apartheid, and calling on the European & international trade union movement to join the international campaign to stop annexation and end apartheid.

Conference also notes the unequivocal 2021 reports by by B’Tselem and Human Rights Watch that conclude unequivocally that Israel is practising the crime of apartheid as defined by the UN.

Conference welcomes the International Criminal Court decision to hold an inquiry into abuses committed in the Occupied Palestinian Territories since 2014.

Conference resolves that action is needed now due to Israel’s continuing illegal actions and that Labour should adhere to an ethical policy on all UK trade with Israel, including stopping any arms trade used to violate Palestinian human rights and trade with illegal Israeli settlements.

Conference resolves to support “effective measures” including sanctions, as called for by Palestinian civil society, against actions by the Israeli government that are illegal according to international law; in particular to ensure that Israel stops the building of settlements, reverses any annexation, ends the occupation of the West Bank, the blockade of Gaza, brings down the Wall and respects the right of Palestinian people, as enshrined in international law, to return to their homes.

Conference resolves that the Labour Party must stand on the right side of history and abide by these resolutions in its policy, communications and political strategy.[3]

And Corbyn pointed out that the injustice and landgrab perpetrated on the Palestinians is an ongoing issue, not merely a historical one:

Shamefully, Corbyn’s notional successor Keir Starmer and his cronies immediately discarded Labour’s rules, which make conference the sovereign policy-making body of the party, to dismiss the Palestine motion out of hand.[4]

Congratulations to Jeremy Corbyn on his award for a lifetime of service and solidarity with all oppressed peoples.