Document:No denial from Starmer that he has received ‘beergate’ fixed penalty 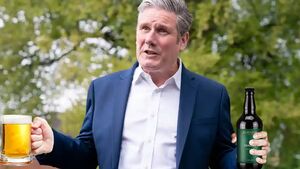 Will Keir Starmer resign over 'beergate'?

Labour leader Keir Starmer has so far failed to deny reports circulating in Labour party and movement circles that he has been issued with a ‘fixed penalty notice’ fine over his ‘beergate’ lockdown get-together in Durham last year.

Skwawkbox contacted Mr Starmer earlier today by text message, to bypass gatekeepers and ensure that he saw the message promptly, asking the Labour leader to confirm or deny the reports. No reply has been received at the time of writing, two and a half hours after the stated deadline for a response.

When asked, Durham Constabulary – which reopened its investigation into the event in early May after renewed complaints - also did not deny directly that fines had been issued in relation to the event, instead saying that there were as yet no ‘new statements’ on the matter.[1]

Keir Starmer has promised to resign as party leader if he is fined in relation to the incident,[2] after pressure built over him demanding Boris Johnson resign merely for being investigated.[3] Last week, it was revealed that the Durham force had issued some one hundred ‘FPNs’, including one for around £10,000, contrary to its previously-stated policy of not issuing fines for older offences. Deputy leader Angela Rayner has also said she would resign.

Mr Starmer’s Twitter feed, which had been silent most of today, posted a tweet about Batley and Spen MP Kim Leadbeater around an hour after he would have received the text message and tweeted again at around 6pm.