The Official Opposition Narrative is an alternative story spun by The Powers That Be, to deceive people who dissent from the official narrative.

Official opposition narratives are establishment-approved stories that run counter the official narrative. This may sound contradictory, but controlling the opposition by leading them is an old tactic. As Theodor Hertzl reportedly counseled "We will lead every revolution against us". In common with official narratives, they cover a strict subset of observable reality, sometimes in ways crafted to appeal to particular groups. Where possible, subterfuge such as distraction or insinuation is preferred to outight lies (which might lead to problems later), but the prefered stategy of dealing with uncomfortable areas (e.g. Cui bono?) is to simply ignore them.

Noam Chomsky has published eloquently about 'framing the debate' - if you can choose both sides of the debate, there is no need to worry about who wins. For example, "Should we spend more on the war on terrorism now or can it wait until next year?..." "What is the best way to attack Iraq?..." "Which set of policies are the best for us, republican or the democrat?..."

Party politics could have been designed with this strategy in mind. For example, the US 2004 election, Republican Bonesman George W Bush was up against Democrat John Kerry, a fellow Bonesman. So whether you voted republic or democrat, you were voting for the same US secret society, Skull and Bones. As Anthony Sutton noted back in the 1980s such playing of both sides is a standard strategy of the Skull and Bones fraternity.[1]

Just as the commercially-controlled media is the venue for promulgating official narratives, so it is for official opposition narratives. This insight may explain how many prominent and apparently ardent critics of the establishment turn out to have an unexpected background. Bill Moyers, for example, whose 1987 film The Secret Government: The Constitution in Crisis introduced many to the concept of the deep state, was White House Press Secretary, a top aide to Lyndon Johnson and a member of the Bilderberg steering committee.

Official opposition narratives are most effective when they are presented as being an anti best abolishment point of view.

The official opposition narrative to the invasion of Iraq is that it was a terrible mistake. Leaders were given "faulty intelligence", were hawkish, overexcited, even perhaps credulous and they allowed their desire to do good to overcome their good sense. Clear evidence of mendacity (e.g. the Downing Street memo) is more or less ignored and the issue of sincerity of leaders or their prosecution for war crimes does not arise. No mention is made of motivations such as the desire of multinational oil companies for continued easy access to fossil fuels, the massive profits made by mercenary companies and financial institutions.

One official opposition narrative to the War on Drugs is again that drug prohibition is 'mistaken'. It states that concern for people's welfare has triumphed over the scientific evidence which suggests that the prohibition of drugs harms society and increases criminality. It never asks "Cui bono?"; it is silent on the wider consequences of drug prohibition such the immense profits which accrue from the global drugs trade or the criminalization of huge sectors of society.

The official opposition narrative of the September 11 attacks is that the 19 hijackers were only successful because officials in US government agencies were incompetent or lazy. This is rarely spelled out, generally only implied. The question of complicity is never discussed. 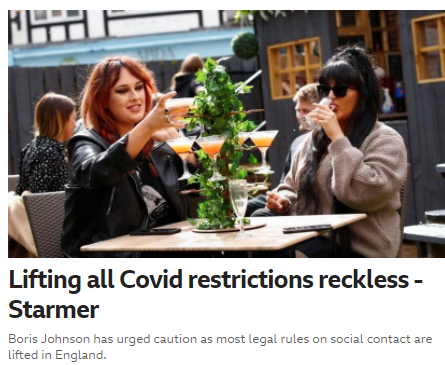 The BBC reports what Keir Starmer and the Labour Party said on "Freedom Day", the day that the introduction of Vaccine passports were announced.

The Labour Party "opposition" has supported every lockdown and restriction.

Liberals criticise Boris Johnson for being authoritarian, but never attack his actual policies, like vaccine passports and mask mandates. In a lot of cases they support them too, but just don't like that it is "Tories" implementing them.