Having repeatedly ruled out an early election,[1] Theresa May did a U-turn and announced that the UK 2017 General Election would take place on 8 June 2017.[2]

Following the election, which resulted in the Conservative Party losing its parliamentary majority, Theresa May entered talks with the Arlene Foster's DUP, whose 10 seats could allow for the formation of a minority Conservative government.[3]

"I welcome the Prime Minister's decision to give the British people the chance to vote for a government that will put the interests of the majority first.[4][5]

"Labour will be offering the country an effective alternative to a government that has failed to rebuild the economy, delivered falling living standards and damaging cuts to our schools and NHS."[6]

On 16 May 2017, Jeremy Corbyn published the Labour Party manifesto entitled "FOR THE MANY – NOT THE FEW" at a rally in Bradford.[7]

On 19 April 2017, Caroline Lucas and Jonathan Bartley, co-leaders of the Green Party, wrote to to Jeremy Corbyn and Tim Farron to urge some form of electoral pact in the upcoming general election, saying this was the only way to “stop the Tories from wrecking our country for generations to come”. They told their Labour and Liberal Democrat counterparts that cooperating could be the route to seeing off an “extreme” form of Brexit and to help deliver a fairer voting system.[8]

Launching her manifesto in Halifax on 18 May 2017, Theresa May promised a free school breakfast (between 8 and 9 o'clock) for all primary school children (cost £60 million), whilst withdrawing free school meals at lunchtime for infants aged between 5 and 7 years (cost £650 million).[9]

Theresa May's plan to take away free hot lunches for schoolchildren was labelled a "disgrace" by TV chef Jamie Oliver, who said:

"It puts our future generations at huge risk by ignoring the proven benefits of a decent lunch."[10] 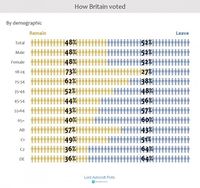 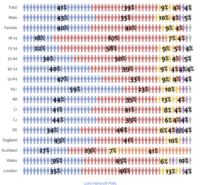 Much attention was focused on the propensity of younger people to vote Labour rather than Conservative in the General Election (reproducing their marked preference for Remain over Leave in the EU Referendum). One survey found two thirds of those aged 18 to 24 saying they voted Labour, as did more than half of those aged 25 to 34. Voters aged over 55 broke for the Tories.

Lord Ashcroft Polls published detailed analyses of the turnout in both the 23 June 2016 EU Referendum and the 8 June 2017 General Election. The most glaring statistic revealed between these two votes is that whereas Males and Females voted identically in the EU Referendum (52% Leave and 48% Remain), there was a big gender imbalance in the General Election:

Asked unprompted which issues had been the most important in their voting decision, Conservatives were most likely to name Brexit (as were Liberal Democrats), followed by having the right leadership. Labour voters, meanwhile, were most likely to name the NHS and spending cuts. Only 8% of Labour voters named Brexit as the most important issue in their decision, compared to 48% of those who voted Conservative.[14]