Dame Margaret Hodge is a British Labour Party politician who was elected Member of Parliament for the constituency of Barking in Essex in June 1994.

Interviewed on BBC Radio 4's programme "Reflections with Peter Hennessy" on 16 August 2016, Margaret Hodge was asked why she had taken against Jeremy Corbyn as Leader of the Labour Party. She said:

"I'm not going to allow my party...to be taken over as a plaything for a whole load of Trots."[1]

On 28 September 2019, Margaret Hodge was defeated in a trigger ballot in her constituency and had to stand in Open Selection against other candidates for her seat of Barking at the next General Election.[2] She was automatically shortlisted, and faced an OMOV (one member one vote) ballot of local members to hold onto her position as candidate.[3] In the subsequent UK/2019 General Election, Dame Hodge was re-elected as MP for Barking with a majority of 15,427 votes.[4]

On 2 December 2021, Margaret Hodge announced she would not be standing at the next General Election.[5] 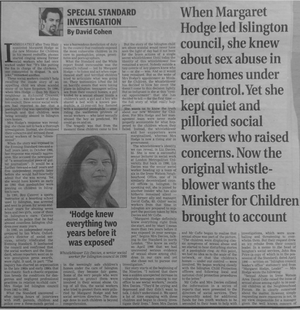 While Leader of Islington Borough Council from 1982 to 1992, Margaret Hodge presided over Islington's 12 children's homes that contained pimps, paedophiles and pornographers who openly abused children.[6] Eileen Fairweather of the London Evening Standard reported that decent staff at the homes who protested were threatened or sacked. In desperation, some bravely contacted the Standard which investigated the abuse. However, Margaret Hodge labelled the newspaper's meticulously-sourced investigation as "sensationalist gutter journalism".[7]

Margaret Hodge stood down as an Islington councillor and in 1994 was elected Member of Parliament for Barking in Essex.

In Tony Blair's government, Hodge was appointed to a series of ministerial positions starting as junior Minister for Disabled People in September 1998 and including Minister for Children (2003 to 2005). Gordon Brown appointed her Minister of State for Culture and Tourism in June 2007.

Following Labour's defeat in the 2010 General Election, Hodge was elected Chair of the influential House of Commons Public Accounts Committee, in succession to Sir Edward Leigh MP.[8] She was succeeded by Labour MP Meg Hillier in March 2015.

Born Margaret Eve Oppenheimer,[9] she was known as Margaret Eve Watson from 1968 to 1978. She was styled Lady Hodge after her second husband, Sir Henry Hodge, was knighted in 2004. Upon her appointment as DBE in 2015 she became Dame Margaret Hodge.

However it turns out that her shareholding is 1.26% of the company. That would mean that she would have been paid out £56,939 in dividends last year. Her shareholding is now worth £1.8m. That’s hardly a tiny, tiny amount as she claimed.

She was asked to explain what other purpose that there could be other than avoiding tax for her share in the trust? She hadn’t replied so far.[10]

In May 2016, Hodge was reported to be plotting against Labour leader Jeremy Corbyn. The plot, according to the Sun newspaper, could happen if a fifth of the Parliamentary Labour Party back her challenge. One MP told the paper:

"Margaret is our perfect candidate - she has a lot of gravitas but is also expendable. She is weighing it all up now but we think she sees it as her duty and will do it."

It is thought her respect among the Jewish community could allow her to make a principled stand on Labour's ongoing "anti-Semitism crisis" (Labour has secretly suspended 50 of its members over anti-Semitic and racist comments as officials struggle to cope with the crisis engulfing the party.) However, any coup against Corbyn will not happen before the 23 June 2016 EU Referendum so as not to damage the party's pro-EU efforts.[11]

Right on cue on 24 June 2016, immediately after the referendum victory for the Leave campaign, Margaret Hodge tabled a motion of no confidence in Jeremy Corbyn as party leader after he failed to convince voters to back Remain. Seconding the motion, Ann Coffey criticised his campaigning over the referendum, saying that it was "lacklustre, it was unenthusiastic" and that he came across as not caring about the result.[12][13]

In July 2018, responding to the Labour Party's proposal to exclude criticism of Israel from its working definition of antisemitism, Hodge is reported to have confronted Jeremy Corbyn and to have called him a 'f***ing anti-Semite and racist' [14].