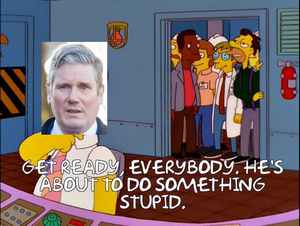 ★ Start a Discussion about this document
Sir Rodney & The Zombie Apocalypse

Does anyone know what the Labour Party is for?

I used to have a vague idea it was the workers Party, for the working man. Socialist even, I mean it says that on your membership card. But it has always been a bit weird, a ‘broad church!’ It was the broad church that bothered me and was one of the reasons I never joined it, until Jeremy Corbyn became leader.

Don’t get me wrong, I always voted Labour, after all, the alternative was always nasty and vindictive to the working class, as well as being the Party of privilege and power. I remember the struggles within the Party under Harold Wilson and James Callaghan, I remember the farce that was the Neil Kinnock years, and I remember the Press destroying Michael Foot with devastating force. I remember Wilson complaining about the right of the Party and wondering how there could be a ‘right’ in the Party in the first instance.

Then we all watched the capitulation of the Labour Party in government to the IMF. Based on incorrect data forecasts, Denis Healey under Jim Callaghan, asked cabinet for permission to go to the IMF for a loan. He advocated cuts, privatisation and austerity to back up the deal. Foot argued against as did Benn. As soon as a year after the loan, the IMF told the UK to sell off part of BP.

Tony Benn wrote in his diary:

"I am ashamed….we have provided a blueprint for selling off public assets in the future, and will have no argument against it!"

Later Healey mentioned that the actual forecast was wrong, and the 1977 years accounts had been in equilibrium:

"I never needed to go to the IMF after all!"

I remember the BBC making him out as some sort of cuddly uncle, "the best PM we never had!" His actions led to breaking the social contract with workers and then to the "Winter of Discontent!" In fact, he paved the way for Margaret Thatcher and the huge onslaught on public services thereafter.

Then we had the aberration that was Tony Blair. New Labour. The dark arts of Mandelson, a snake of the highest order. Liars and charlatans, the murderers and war mongers, the friends of dictators, perverts, child molesters and oligarchs. Eventually, the truth will out, and one day we will know the full extent of their perversions, maybe even during the ongoing Maxwell trial. We can hope. The establishment looks after its own, as it did with Ted Heath, Leon Brittan, Greville Janner, Jimmy Savile, and the rest of the ‘club!’

Which brings me to Sir Rodney Woodentop. How in God’s Green Earth did we end up with him as LOTO? He was involved in the coup to try and remove Jeremy Corbyn, he made a complete hash of the UK/2019 General Election with his Brexit u-turns, completely lost the Red Wall. He lied to the membership to get elected. His ten pledges were thrown away almost before the ink had dried on them. He kept his donors hidden until after the vote, then he declared war on the left. And boy, he has done it with gusto. Starting with Rebecca Long-Bailey and then turning on the membership, he is fast bankrupting the Party in his lust for neoliberal purity.

His recent re-shuffle has rid any lingering soft left and left a Shadow Front Bench like a horror show. Bringing back Yvette Cooper (remember the immigration mugs?) is like as declaration of love for Blair and Nu-Labour. His snub to Angela Rayner was an out and out slap (I’d feel sorrier for her if she hadn’t burnt her boats with the membership with her willing persecution of Corbyn and others. She has no base now, all alone, embarrassed and sidelined). Maybe it will do her good, a time for reflection?

Black and BAME members of the PLP are put to the sword. Zarah Sultana has been abused heavily on social media and other platforms but not a peep from Rodney. He hasn’t even spoken to her since he became leader, which I find absolutely astonishing. He even makes the Tories front bench look diverse. Labour look like a Tory C of E front pew row, with the possible exception of David Lammy.

It is impossible to win a Labour majority without Scotland, but he seems to be unaware of this. At least a conversation with the SNP about a coalition to bring down the Tories could be had. His conversion to neoliberalism and business hasn’t gone unnoticed among the Unions, with Unite the latest to cut funding. The membership is plummeting and who he thinks is going to wear out shoe leather canvassing at the next General Election, is anyone’s guess. Even the media are writing headlines like "The new Labour leader will stand with the Taxpayer against the Unions!"

Muttering on about business rates as soon as he is in an interview, instead of the Gig Economy, workers rights, pensioners being shafted, foodbanks and homelessness soaring. Clive Lewis gives us a clue to his methodology. He says Starmer is frightened of "unsettling the elite, as they will stop him being PM!"

He is a coward then. And the PLP is packed with them. Little people with huge egos, all pandering to the establishment till they leave and go to the other place, or a nice earner for their lobbyists. I despise them all, Hodge, Streeting, Phillips, the list is endless.

Why should this be an issue? They are politicians after all, and duplicity underscores our political system and corruption and criminality are widespread among our elites, right across the planetary spectrum. Because for a brief fleeting moment back in 2017, we had the glimpse of two politicians who, if they had made it through, could have at least changed some of the system, Corbyn and Sanders.

But the Elites dug in, smearing and othering both, terrified they might change the course of history, but what it also showed was the corruption and fraud endemic in Labour and the Democrats.

I remember the feeling of despair after the 2019 GE and thinking "My God, we have just lost the next ten years to a cult of Ayn Rand libertarians who will do nothing in the face of the swiftly approaching asteroid."

And then to look at the election of Sir Rodney Woodentop and one has to ask oneself:

His capitulation to Fossil Fuel companies and his swift demotion of Ed Miliband from his business brief tells us a lot. Ed will have the Green New Deal brief but will be a lone voice sitting in the corner totally ignored by the Leaders Office. There will be no talk of reigning in the corporations under his leadership. And this matters, hugely!

The Tories offer own goal after goal but each time it is passed, Rodney kicks it out for a throw in. Corruption with PPE contracts, hoof! New powers for dissent and protest making it all but illegal, hoof! Christmas parties during lockdown, hoof! Destruction of the NHS and privatisation, hoof! Digital passports and digital currency, hoof! He is politically, economically and ecologically illiterate. To not see the Global Warming Dams about to be breached, to avoid seeing Ecological Collapse is unforgivable. He staggers around like Blind Pew, obsessed with his own personal ambition whilst the world is burning.

In the last three years we have seen the first phase of catastrophe, huge fires across the arctic and the Global South, heat dumps and the largest spread of locusts since biblical times. Flooding across Germany, Italy and now flooding and mud slides cutting of huge swathes of British Columbia. Huge hurricanes and tornadoes, twenty-six million people living through drought and food shortages in the Horn of Africa. And this is only the beginning!

On top of this we have Sars-Cov 19, the latest in zoonotic spillover predicted by scientists for decades. The shrinking of ecological niches will be sending more our way and soon, MERS, Nipah, avian flu, or as the French say: "On est tous des Pangolins!"

Business as usual simply isn’t good enough. The thinking of the right in Labour simply isn’t credible with what we about to face. Getting into power and tweaking a few things to shower a few baubles on the plebs isn’t going to make the grade anymore. It isn’t acceptable and it isn’t credible. We know the Tories are crooks and bandits. We know what the right is doing around the world. Just as we needed a Labour Party to step up to the frontline, we find it full of cowards and traitors, all sold out to Capital. The call to eco-socialism is dead in Labour. It’s time to put the Party behind us, step around its complicit remains, mask up against the stench of its decay and corruption and move on.

We know net zero (a con btw) by 2050, even if it is achieved, which I doubt, will lead us past 2deg of warming. As our politicians have proved to be made of straw, it is time to bypass the systems they have created. The time for direct action is upon us now. The Indigenous peoples across the planet are fighting back, and we must join with them.

The forces of Capital are arraigned against us. It’s time to take them on.