Greta Thunberg is a Swedish teenage environmental activist on climate change. In her own words, she was "diagnosed with Asperger's syndrome, OCD, and selective mutism." [1]

She would never have been given a platform by the World Economic Forum if her talking points and keywords were not what the rich and mighty wanted to be heard, leading the public into emergency mode. 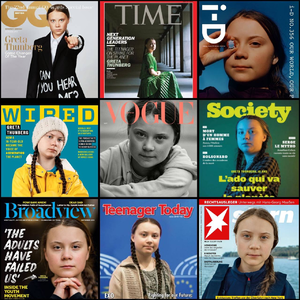 Thunberg first became known for her activism in August 2018 when, at age 15, she began spending her school days outside the Swedish parliament to call for stronger action on global warming by holding up a sign saying (in Swedish) "School strike for climate". Soon, other students engaged in similar protests in their own communities. Together, they organised a school climate strike movement under the name Fridays for Future. [2] [3]

She has spoken both in public and to political leaders and assemblies, in which she urges immediate action to address what she describes as the climate crisis. At home, Thunberg convinced her parents to adopt several lifestyle choices to reduce their own carbon footprint, including giving up air travel and not eating meat.[4] 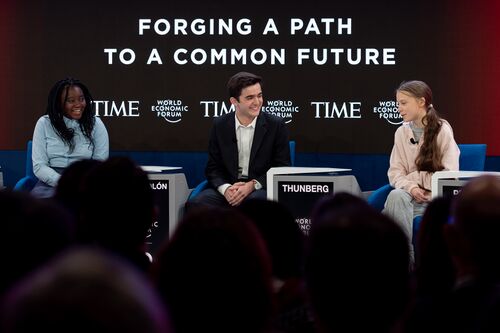 While there is no reason to doubt the genuineness of her beliefs, the way it was chosen from the very start to be amplified by corporate media and politicians is unusual. Compare the exposure to peace activists or advocates of meaningful social justice, who struggle immensely to get heard and would never be invited to speak at the World Economic Forum.

Her campaign found remarkable resonance among the rich and powerful; she was fêted by parliaments, she received audience with world leaders like Ursula von der Leyen, she was invited to make a speech at the playground of the corporate world, the World Economic Forum in Davos, where she received massive media attention, replete with the talking points and keywords these organisations use.

In corporate media, skepticism of the "Greta-phenomenon" is framed as a bullying criticism of her alleged autism[citation needed]. This is a convenient trick to deflect from the real criticism, which is the way she has been amplified by the rich and powerful to further their own agendas.

Her sudden rise to world fame has made her a leader and a target.[6] In May 2019, Thunberg was featured on the cover of Time magazine, which named her a "next generation leader" and noted that many see her as a role model.[7] Thunberg and the school strike movement were also featured in a 30-minute Vice magazine documentary titled Make the World Greta Again.[8] Some media have described her impact on the world stage as the "Greta Thunberg effect".[9] Thunberg has been the recipient of numerous honours and awards, including fellowship of the Royal Scottish Geographical Society, has been named as one of the 100 most influential people of 2019 by Time magazine, and has been nominated for the Nobel Peace Prize. In September 2019, she addressed the UN Climate Action Summit in New York.

Her crossing of the Atlantic has been touted as a 100% zero carbon emission journey and much of it in the commercially-controlled media was spin and omission to make it look like that,[10] but in reality it was very much the opposite.[11]

Pro-Abortion. Ironic considering that she is autistic and would have been aborted if there had been any option for gene selection.[13]