From Wikispooks
(Redirected from Contra)
Jump to navigation Jump to search

The Iran-Contra affair was an illegal, international arms deal involving drug trafficking and defying US congress to supply weapons to the Nicaraguan "Contras". Lance deHaven-Smith has suggested that the operation arose from Bill Casey's October Surprise conspiracy. Russ Baker suggested in Family Of Secrets that its exposure may have been a limited hangout organised by US Vice President George H. W. Bush to try to force the resignation of Ronald Reagan.

“One of the most complicated and intrigue-filled scandals in recent decades, the Iran-contra affair dominated the news for many months. It consisted of three interconnected parts: The Reagan administration sold arms to Iran, a country desperate for materiel during its lengthy war with Iraq; in exchange for the arms, Iran was to use its influence to help gain the release of Americans held hostage in Lebanon; and the arms were purchased at high prices, with the excess profits diverted to fund the Reagan-favored "contras" fighting the Sandinista government in Nicaragua.”
Larry J. Sabato (1998)  [1] 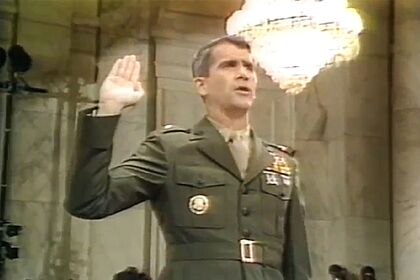 Oliver North is sworn in before the United States House Select Committee to Investigate Covert Arms Transactions with Iran, on July 7, 1986

Lance deHaven-Smith wrote in 2010 that "given what is now known about Iran-Contra, it appears likely that the Iran-Contra operation grew out of the October Surprise agreement".[2] The core personnel appear to have been drawn from the cabal centered around George H. W. Bush, including Donald Gregg and Felix Rodriguez.

Even the name, "Iran-Contra", is disingenuous, ignoring as it does the drug dealing, which was never fully exposed. The abundance of evidence of this has been obscured if not from the public record, then largely from public consciousness.[3] Drawing a parallel with the Watergate Coup, Mark Gorton suggests that Iran-Contra was a limited hangout orchestrated by George H. W. Bush to try to get Ronald Reagan to resign, but that Reagan loyalists Edwin Meese and George Schulz were able to fight off the coup attempt.[4] 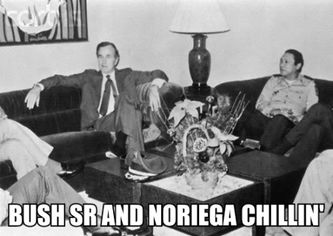 The most significant drug trafficker may have been the notorious Barry Seal who supposedly cut a deal and became an informant. His co-pilot, Emile Camp, and a partner in many of Seal's exploits died in an Air America crash in 1985 on Fourche Mountain north of Mena. Tosh Plumlee, Bo Abbott and Edward Cutolo[5] have all testified under oath to involvement in US government/CIA sanctioned drug trafficking.

As Mike Ruppert wrote to the Senate Select Committee on Intelligence:

Most Americans have been lead to believe that the purpose of these hearings is to ascertain whether or not there is any evidence that the Central Intelligence Agency dealt drugs during the Iran-Contra era. If these hearings were about evidence, then the most patriotic duty I could perform would be to quote Jack Blum who served as chief investigator for the Kerry Subcommittee on narcotics and "terrorism" ten years ago. He testified before this committee last year and said, "We don't have to investigate. We already know." We could save a lot of taxpayer money by just rereading the records of the Kerry hearings. There is more evidence in there than any court in the world would ever need to hand down indictments.

At best, I could just quote you one entry from Oliver North's diary dated July 5, 1985, which said that $14 million to buy weapons for the Contras, "came from drugs." I wouldn't need to mention the two hundred and fifty other such entries in his diary, which refer to narcotics. Or I could quote Dennis Dayle a senior DEA supervisory agent who said, "In my thirty year history in DEA, the major targets of my investigations almost invariably turned out to be working for the C.I.A."

But these hearings are not about evidence. They are about corruption and cover-up. The CIA did not just deal drugs during the Iran-Contra era; it has done so for the full fifty years of its history. Today I will give you evidence which will show that the CIA, and many figures who became known during Iran-Contra such as Richard Secord, Ted Shackley, Tom Clines, Felix Rodriguez and George Herbert Walker Bush, who was DCI when I first became exposed to Agency drug dealing, have been selling drugs to Americans since the Vietnam era. I have been very careful to make sure that what I tell you today is admissible evidence in criminal proceedings...[6]

Peter Dale Scott writes in The Doomsday Project and Deep Events that "We should expand our consciousness of Iran-Contra to think of it as Iran-Afghan-Contra. And if we do, we must acknowledge that in this complex and misunderstood deep event the CIA in Afghanistan exercised again the paramilitary capacity that Stansfield Turner had tried to terminate when he was CIA Director under Jimmy Carter. This was a victory in short for the faction of men like Richard Blee, the protector of al-Mihdhar as well as the advocate in 2000 for enhanced CIA paramilitary activity in Afghanistan.[7]"

"Despite three separate instructions not to, the CIA still destroyed Iran-Contra evidence".[8]

The scandal began as an operation to free the seven American hostages being held in Lebanon by a group with Iranian ties connected to the Army of the Guardians of the Islamic Revolution. It was planned that Israel would ship weapons to Iran, and then the United States would resupply Israel and receive the Israeli payment. The Iranian recipients promised to do everything in their power to achieve the release of the US hostages. The plan deteriorated into an arms-for-hostages scheme, in which members of the executive branch sold weapons to Iran in exchange for the release of the American hostages. Large modifications to the plan were devised by Lieutenant Colonel Oliver North of the National Security Council in late 1985, in which a portion of the proceeds from the weapon sales was diverted to fund anti-Sandinista and anti-communist rebels, or Contras, in Nicaragua.

In the end, fourteen administration officials were indicted, including then-Secretary of Defence Caspar Weinberger. Eleven convictions resulted, some of which were vacated on appeal. The rest of those indicted or convicted were all pardoned in the final days of the presidency of George H. W. Bush, who had been vice-president at the time of the affair.[9]

Sweden's Olof Palme returned to power in October 1982, at the very point some in Europe were kicking back against Reagan’s escalation of the Cold War; and Palme took a markedly anti-South African line at a time when South Africa was a party to the US-Iran arms deal. Under this arrangement, the CIA provided arms to Iran to further the wider global interests of the US. Payment for the arms, many of which were manufactured in Sweden by Bofors, was made via banking facilities in the Seychelles. (The murder, in London, of Seychelles opposition leader Gérard Hoarau in November 1985 is suspected of being a South African commissioned ‘hit’, designed to stop evidence of these payment arrangements emerging.)

In exchange for this military assistance, Iran supplied oil to South Africa, thus breaking a UN embargo. In 1985 Swedish customs began raiding the shipping companies engaged in this traffic, and found that the exports were being flown to Iran on CIA-owned Boeing 707s. (Oliver North used the same aircraft for other work. See ‘Mystery, intrigue hang over 6 airline tied to Iran affair’, The Orlando Sentinel, 4 January 1987 at <https://www.orlandosentinel.com/news/os-xpm-1987-01-04-0100030125-story.html>.)

The Stieg Larsson/Jan Stocklassa theory is that, fearful this operation would be revealed by Olof Palme, the US and South Africa agreed he should be eliminated. (Stocklassa regards William Casey - then Director of the CIA - as, unsurprisingly, the key US individual in orchestrating the complex US-South Africa-Iran arrangements. Casey died in 1987. The ‘arms for Iran’ scandal finally broke in late 1986, after Palme had been killed.) The US subcontracted this to the South Africans who then supervised a group of local Swedish activists and extremists in carrying out the task. One of whom had been earmarked in advance for use as a ‘patsy’ should the authorities manage to conclude who was actually behind the crime.[10]