Document:Filtering Sources On The Syrian War 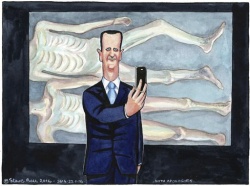 If corporate media performance on Iraq was shocking, the response to Syria is made worse precisely because the lessons from Iraq could hardly be more obvious.

We know how the Iraqi 'threat' was demonised with hyped atrocity tales, invented 'links to al Qaeda' and non-existent WMD. We know the West was all along the real threat, using 'diplomacy' to achieve, not avoid, a war for control of Iraq and its oil. [1]

Despite this, and despite the clear need for scepticism regarding claims made about a Syrian government also being targeted by the West, the cartoonist Steve Bell – respected as a rare radical voice at the Guardian - recently produced this cartoon in response to a report commissioned by the Qatari government claiming that the Syrian government had 'systematically tortured and executed about 11,000 detainees since the start of the uprising'. [2]

The cartoon suggests, not only that Syrian president Assad is personally responsible for the mass torture and deaths, but that he is proud of them. This demonisation of an Official Enemy recalls the crude state propaganda of the First World War.

Consider the source of the claims depicted in Bell's cartoon. The Guardian reports that Qatar 'has played a major role arming the rebels seeking to overthrow Bashar al-Assad', having played 'a central role in extending support to the Libyan rebels fighting to overthrow Muammar Gaddafi' [3]. Noam Chomsky notes that arms have been 'flown in [to Syria] from Qatar by the CIA' [4]. Indeed, Qatar has close military ties to the US and UK, with forces armed and trained by the West. Qatar contains the principle overseas headquarters of the US military's Central Command (CENTCOM) and was a key staging ground for the invasion of Iraq. In 2012, the US State Department reported that arms totalling $1.7 billion had been approved to Qatar in the previous fiscal year.

Qatar has long been a dictatorship, an absolute monarchy - political parties are forbidden and there is no independent legislature. Amnesty International recently described how the authorities 'maintain strict control on freedom of expression' [5]. New cases of torture recently emerged in a country where migrant workers are 'exploited, abused and inadequately protected under the law'.

We wrote to Bell:

Hi Steve
Regarding this week's cartoon on Assad's 'selfie', are you not at all sceptical about the timing, accuracy and provenance of the recent report on Syrian government killing and torture? You'll know that the report was commissioned by the Qatari government which, according to the Financial Times, has bankrolled the 'rebels' to the tune of $3 billion in weaponry and other support.

Isn't it obvious that Qatar timed the release of the report to provide an ideal backdrop for media discussion (cartoons included) of the Geneva II peace conference? Should that not encourage a little caution and scepticism?
Sincerely
David Edwards (January 23, 2014)

After an emailed nudge requesting a response, Bell replied:

Dear David Edwards
I'm quite aware of the role of the Qatari government in the Syrian disaster, just as you are well aware of the record of the Assad regime's security apparatus. Timing is important, as is the need to keep our eyes open.
Best wishes
Steve Bell (January 24, 2014)

No doubt many Guardian readers would consider it Bell's job to lampoon instant acceptance of questionable propaganda, and indeed stonewalling replies of the kind he sent us in response to our questions.

Craig Murray, the former British Ambassador to Uzbekistan, put the cartoon, and much other media performance, in perspective:

'But whether 11,000 people really were murdered in a single detainee camp I am unsure. What I do know is that the BBC presentation of today's report has been a disgrace. The report was commissioned by the government of Qatar who commissioned Carter Ruck to do it. Both those organisations are infamous suppressors of free speech. What is reprehensible is that the BBC are presenting the report as though it were produced by neutral experts, whereas the opposite is the case. It is produced not by anti torture campaigners or by human rights activists, but by lawyers who are doing it purely and simply because they are being paid to do it.' [6]

'It is plain the intention of the commissioners of the report is not to investigate atrocities in Syria, but to push again for Western military intervention. Part of a strategy which will next involve a staged breakdown of the Geneva talks.' [7]

The report was headline and front page news on BBC TV, radio and website, and was given massive coverage across the media. It was accepted - with rare caveats vaguely noting that Qatar 'supports' the 'rebels' - at face value.

If a report from such an obviously biased source can merit wall-to-wall media coverage, how about a report on Syria's August 21, 2013 gas attacks by two authentically credible figures like Richard Lloyd and Theodore Postol?

Lloyd is a former United Nations weapons inspector who in two decades at Raytheon, a top military contractor, wrote two books on warhead design. He has written a critique of the Israeli Iron Dome anti-missile system for engineers and weapons designers. In March 2013, the New York Times noted that Lloyd 'has the credentials for a critique'. [8]

Postol is a professor and national security expert in MIT's Program in Science, Technology and Society. In 1995 he received the Hilliard Roderick Prize from the American Association for the Advancement of Science and in 2001 he received the Norbert Wiener Award from Computer Professionals for Social Responsibility 'for uncovering numerous and important false claims about missile defenses' [9]. Postol has a proven track record in, for example, debunking Pentagon claims on the success of its Patriot missile system. [10]

Their January 14 report titled, Possible Implications of Faulty U.S. Technical Intelligence, examines US government claims regarding the August 21 chemical weapons attacks in Damascus. The report finds that the range of the rocket that delivered sarin in the largest attack that night was too short for the device to have been fired from Syrian government positions, as claimed by the Obama administration.

Using mathematical projections about the likely force of the rocket – which has been variously described as 'a trash can on a stick' and 'a soup can' – Lloyd and Postol conclude that the device likely had a maximum range of 2 kilometres, or just more than 1.2 miles. The 'trash can' was not capable of flying the 6 miles from the centre of the Syrian government-controlled part of Damascus to the point of impact in the suburbs, as claimed by the US government, nor even the 3.6 miles from the edges of government-controlled territory. Lloyd and Postol comment in their report:

'This indicates that these munitions could not possibly have been fired at east Ghouta from the "heart" or the eastern edge of the Syrian Government controlled area depicted in the intelligence map published by the White House on August 30, 2013.

'This faulty intelligence could have led to an unjustified US military action based on false intelligence.

'A proper vetting of the fact that the munition was of such short range would have led to a completely different assessment of the situation from the gathered data.'

'I honestly have no idea what happened. My view when I started this process was that it couldn't be anything but the Syrian government behind the attack. But now I'm not sure of anything. The administration narrative was not even close to reality. Our intelligence cannot possibly be correct.' [12]

Lloyd, who has carefully studied weapons capabilities in the Syrian conflict, rejects the claim that rebels are less capable of making these rockets than the Syrian military:

'The Syrian rebels most definitely have the ability to make these weapons. I think they might have more ability than the Syrian government.' [12]

Lloyd and Postol have made clear that they are not arguing that the rebels were behind the attack, but instead pointing to the flawed assessments behind US claims.

So how have the same media that gave so much coverage to the Qatari-commissioned report responded?

According to the Lexis media database (February 3, 2014), Lloyd and Postol's report has not been mentioned in any UK newspaper. Following a search of the Factiva database (January 28, 2014), the US political analyst David Peterson told us that the only major US newspapers to have covered the report are the New York Times and Miami Herald, with one mention each.

This near-total blanking of the report comes in the wake of a detailed analysis of the same chemical weapons attacks by renowned, Pulitzer Prize-winning investigative journalist Seymour Hersh in the London Review of Books on December 19, 2013. [13]

As we discussed in December, [14] Hersh reported on his interviews with US intelligence and military personnel:

I found intense concern, and on occasion anger, over what was repeatedly seen as the deliberate manipulation of intelligence. One high-level intelligence officer, in an email to a colleague, called the administration's assurances of Assad's responsibility a "ruse". [13]

In an interview with Amy Goodman on Democracy Now!, Hersh added: there are an awful lot of people in the government who just were really very, very upset with the way the information about the gas attack took place.

Hersh's article has received one mention in the entire UK press, in the Daily Mail. [15]

This, then, is more evidence indicating a prime mechanism of thought control in ostensibly democratic societies. Sources favourable to state-corporate power, however non-credible, are granted massive favourable coverage. Sources that challenge the required view of the same interests are simply ignored, with no explanations given by a media system that does not tolerate self-analysis or public interference in what is, after all, a business.

Elite proprietors and parent companies naturally select editors to represent the interests of elite power. Because the same interests run all major media outlets, it is no surprise that they flip as one, like a flock of starlings, towards favourable sources and away from unfavourable ones. The autocratic nature of the media system means that the public has no way to ask even the most basic questions about these decisions. We, for example, are largely dismissed as annoying malcontents.

While a number of national newspapers reported Yelland's comments, Lexis finds that, appropriately enough, not one of them mentioned his claim that 'many papers remain dictatorships'.