Refugees International is an NGO that does not accept government funding, which "enables them to speak freely, underlining policies that are working well as well as where global action falls short". The board is filled with military/intelligence actors, leading on to think it might have been created to create the media justifications for US humanitarian interventions, to enable increased migration from enemy countries such as Syria and Venezuela, and to erase mention of US involvement in creating refugee and migrant situations.

To be noted is that this NGO does not actually do any refugee aid work, but is a lobbying group.

Refugees, migrants and international population flows('strategic engineered migration') have long been of interest to the US empire, a "widely deployed but largely unrecognized instrument of state influence"[1], as unconventional and nonmilitary methods for weakening enemies, creating justifications for interventions and influencing the home economy, to achieve political goals that would otherwise be unattainable.

RI has been active in promoting migration from Venezuela[2][3], consistenly labelling (economic) emigrants "refugees", in line with the US narrative.

In a testimony to US Congress, RI leader Eric Schwartz "emphasized his concern about historic global refugee crises and the vexing humanitarian challenges confronting the United States and the world today. In particular, Schwartz pointed to the humanitarian crisis unfolding in Yemen, with millions of Yemeni men, women, and children facing famine conditions made worse by large-scale outbreaks of cholera. Schwartz urged the United States to maintain its leadership role in responding to humanitarian crises like that in Yemen, saying, "U.S. involvement may not guarantee the success of a humanitarian response mission, but lack of U.S. leadership will guarantee its failure."[4] Thereby he erased the role of exactly this US leadership in creating the famine by leading from behind in the Saudi attack on Yemen.

"Refugees International and other partners successfully advocated for the passage of the Elie Wiesel Genocide and Atrocities Prevention Act of 2018, which makes it U.S. law to regard the prevention of genocide and other atrocities as a core national security interest and moral responsibility"[5], thereby creating the justificationhumanitarian interventions (remember that almost every US war routinely is justified as "prevention genocide").

"Through our own advocacy and in coalition with NGO partners, Refugees International helped ensure release of select U.S. funding to provide support for the White Helmets"[6], a British-run propaganda outfit.

“If I’m reading in the newspaper about a crisis somewhere in the world, it is of great consolation to me to know that, if not at this moment, then very soon I will be hearing from Refugees International about how we should think about the crisis and more importantly what we should do about it.””
Samantha Power [7] 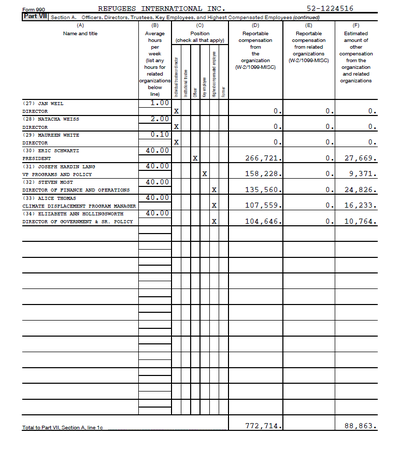 The funding section[8]lists several big anonymous donors, making the financing a bit oblique, despite claiming no government funding. It meticulously avoids normal cutouts like USAID and National Endowment for Democracy,but in the end, thanks to an impressive number of smaller, elite donors, RI still ends up being close to the corridors of power.

Despite George Soros being on the board, neither he nor his CIA-close Open Society Foundations is listed as donors.

In addition toGoogle,Booz Allen Hamilton and Albright Stonebridge Group LLC, there is an impressive number of smaller ($1,000-$49,999) donors from the American elite.