The Institute for Statecraft, is clearly projecting its permanent war mentality and intense secrecy onto anyone who questions its right to stoke Russophobia in pursuit of Cold War 2.0. The group (like PropOrNot) makes copious references to "Russian Propaganda" and "misinformation". Anyone who is less than wholehearted in endorsing the truth as spoken by the BBC, for example, by encouraging questioning of their control of the narrative as "pro-Russian". Internal documents reveal that the group was sharply focused on perception management[1], was ready to use fiction to try to "counter Russian misinformation" or to use covert interference in the democratic process to "defend democracy".

When asked about the Integrity Initiative, the UK government acted as if it had not understood the concerns and repeated the charge that anyone criticising it was somehow under the sway of Russia - so there is no official narrative about the projection exemplified by the Integrity Initiative. The document below left, from leak 4, may provide a revealing insights into the group. 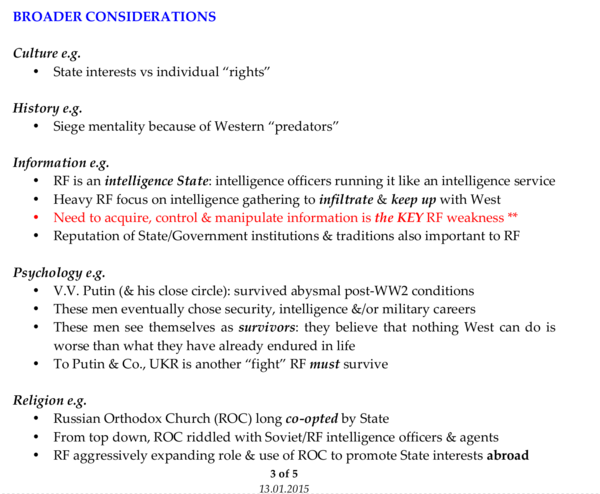 A document from the 2nd Integrity Initiative leak is entitled "Domestic Determinants of Russia’s anti-Western Campaign".

“It is essential to understand their ability to lie and to have no remorse for their murderous actions, be it an individual, such as Litvinenko and possibly Skripal, or be it hundreds of their own people or thousands of innocent victims in Ukraine or Syria.”
Integrity Initiative [3]
Emphasis in original

There is a clear distinction between the Russian definition: an all-encompassing, and not limited to wartime and the Western one: limited, tactical information operations carried out during hostilities.

Russian approach is much broader than simply sowing lies and denial, for instance maintaining that Russian troops and equipment are not where they plainly are.

Russian state and non-state actors have exploited history, culture, language, nationalism and more to carry out cyber-enhanced disinformation campaigns with much wider objectives.

Russian aims to extract, exfiltrate, manipulate, distort, or insert information, or just isolate a target from sources of information other than Russian ones.”
Integrity Initiative [4]

“Russsia’s “escalate-to-deescalate” doctrine provides the geo-strategic context within which its New Generation Warfare is operationalised. Putin has prepared his country to fight in any circumstances so that, when the victims and their neighbors hesitate, the Kremlin can intimidate both the victims and potential supporters into submission. For a Moscow whose society and economy is in decline, this strategy can succeed only if it can previously undermine the societies and governmental structures of the countries Putin targets by successfully employing a wide range of instruments of power – political, economic, social, technological; disinformation, malign influence, corruption, cyber, dirty tricks and the like. These methods exploit our weaknesses, divide our populations by exaggerating cultural differences within societies, drive wedges between nations with shared values by exaggerating the risks of collective security and dismissing the costs associated with its failure.”
' [citation needed]
The document does not mention authorship, but may be Chris Donnelly since he introduces both days of the seminar.
Emphasis added

"Putin’s Russia is emerging as a superpower which poses a threat to the West and its values."[citation needed]

Information sources are routinely classified as "pro-Russian", as if support of any Russian narrative implied support for all Russian narratives. This failure to see that news sources may have an integrity to their output which reflects their own, deeply held beliefs — so being "pro-Russian" on some topics and "anti-Russian" on others — be a projection of the group's uncritical approach to information and lack of commitment to a truth beyond any official narrative.

The group's documents assume that the UK government's official narrative on the Skripal Affair is the unvarnished truth:

“Postimees has published 14 articles after the Skirpal (sic.) attack. Most of them are referring to the facts announced by the UK government or security forces.”
Integrity Initiative [5]