From Wikispooks
(Redirected from RT)
Jump to navigation Jump to search

RT, originally Russia Today, is a television network funded by the Government of Russia. It operates cable and satellite television channels directed to audiences outside of Russia as well as providing Internet content in various languages, including Russian.[1] 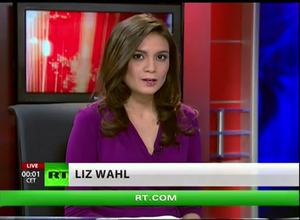 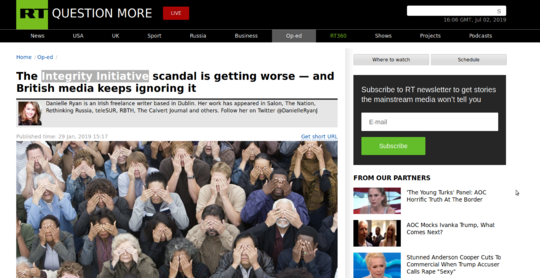 Liz Wahl, a correspondent and anchor for the RT US from 2011 to 2014 resigned on air and denounced the station, alleging systematic anti-Western bias. She then joined the Institute for Statecraft, in which capacity she wrote for Stopfake that “there was constant pressure from the top to deviate from accuracy to deliver an anti-American and anti-Western narrative.”

RT showed considerable interest in the Integrity Initiative Leak, and reported on the pronounced Western commercially-controlled media's disinterest in the topic.[4]

On 17 October 2016, Britain's National Westminster Bank (NatWest), which is part of RBS Group, informed RT UK that it was going to close all of RT's bank accounts, without explanation. Although the British government is the Royal Bank of Scotland Group’s majority shareholder, Prime Minister Theresa May’s office denied any involvement. But Russian Foreign Minister Sergei Lavrov insisted that the decision had not been taken by the bank independently:

“It’s as clear as day that this decision was not made by the bank. And not any other bank – banks don’t make such decisions on their own,” he said. “I believe an old saying is appropriate here: don’t treat others the way you don’t wish to be treated yourself.”[5]

A petition to NatWest started by Oliver Tickell, editor of The Ecologist magazine, which sought to have Russia Today's UK's bank accounts reinstated, soon exceeded one thousand signatures.[6]

On 18 October 2016, the Daily Telegraph reported that NatWest was backtracking on freezing RT's bank account apparently because "Moscow responded to the threat by claiming it would freeze the BBC's finances in Russia and report Britain to international watchdogs such as the OSCE for violating Russia's right to freedom of speech."[7]

It may be instructive to note that some material is removed from the Russia Today website.

A September 2011 report noted that Vladimir Putin had claimed that the suggestion that the US intelligence agencies were involved in the 9/11 attacks was "complete nonsense".[8] By March 1, 2015, this had been removed from their website.[9]

The RT site produced a video series, "The Truthseeker", archives of which were available online.[10] Two episodes however, Episode 30, "Who Has Nukes in the Middle East?", and Episode 21 "Americas Next Colonies Part 2" though available on YouTube, were no longer available from RT.com as of 1 March 2015.[11]

UK independent journalist Tony Gosling used to be a regular guest on Russia Today, but was dropped after criticism of Russia. 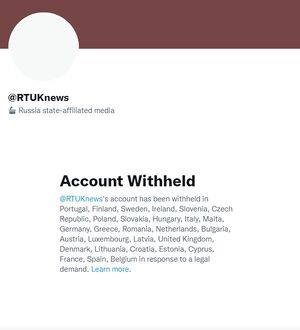 In November 2017, the US Department of Justice demanded that RT register under FARA as a "foreign agent".[12][13]

After the 2022 Russian invasion of Ukraine, RT was taken off air.

A Quote by Russia Today