The original pdf is all with fancy graphic presentation. Most of it is converted to plain text here, with screenshots of a few of the graphic-heavy original pages.

The Internet has surpassed print publications to become the foremost vector for information, giving access to an infinite number of information sources from anywhere, for anyone and at any moment. The growing ubiquity of mobile devices and permanent access to the Internet is enhancing this domination of the information landscape.

• INFORMATION IS NOT EASILY RECYCLED -

Contrary to traditional media, content available on the Web is not easy recycled, often piling up and gathering dust in a process known as ‘online sedimentation.’ This is especially true on the first pages of Google and on Wikipedia, where content can remain visible for several years. Yesterday’s information is not replaced by today’s. At the same time, ideas and messages published online are regularly repeated and re-appropriated, even by opinion leaders and decision makers. This further contributes to amplifying the impact of communications.

Online expressions of opinion are shaped by specific codes of conduct. Where traditional media ascribes to a set editorial policy, online content is often more subversive and more critical. This tendency is further exacerbated by social recommendation (‘liking’ and sharing), increasing the ‘virality’ and the ultimate impact of information.

• INFORMATION IS NEITHER HIERARCHICAL NOR MODERATED AND IS OFTEN ANONYMOUS -

The ability of users to generate their own content, often anonymously and without any moderation, has led to the emergence of new opinion leaders. Diverse publications of varying quality are available on the Internet, without any established hierarchy between ‘real experts’ and amateurs. Information published online is consequently becoming more difficult to verify and/or contradict. Compared to traditional media, it is far more difficult to identify authors and their agendas.

The Web has profoundly changed how we relate to information and, in certain cases, completely reversed traditional influence structures.

The Internet functions like an echo chamber for traditional media. A symbiotic relationship between the Web and the media helps to sustain both.

100 USERS CONSUME THIS INFORMATION. THEY MAKE UP THE SILENT MAJORITY OF ONLINE PUBLIC OPINION. 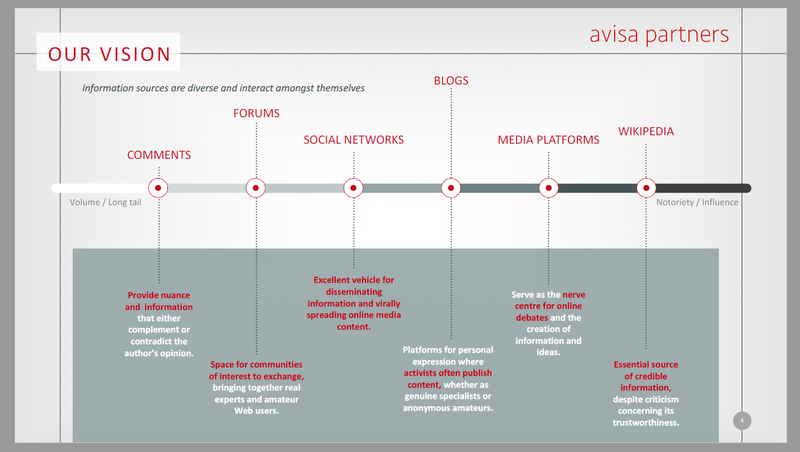 The Web plays an ever-expanding role as both an information source and amplifier of debates, concerns, and grievances. As such, it exerts increasingly overwhelming influence over the media, decision makers, and public opinion.

• FROM MAJOR ECONOMIC AND SOCIETAL CONTROVERSIES TO SPECIFIC LOCAL DEBATES, ALL ISSUES HAVE AN ONLINE DIMENSION:

Today, it is essential to pay attention to the visibility of strategic issues online, especially as decision makers and opinion leaders name the Internet as their primary source of information. The media can influence a variety of stakeholders at different levels:

Facing constant time constraints, their choice of subjects, angles, and sources depends in large part on the published materials they find on the Web.

Pay close attention to the general mood of the Web and take part in online debates themselves. Politicians and their aides go online to collect ideas and gauge opinions. The Internet is a public forum that can be used to highlight their initiatives, but it can also frighten politicians by multiplying their exposure.

Use the Internet to supplement their analyses and understand the visibility of a subject, gauging how the general public perceives it. They identify opportunities for action and evaluate the activities of both partners and targets.

Use the Web to keep track of their competitors, identify growth opportunities and risks, evaluate their own image and reputation, and determine the quality of their partners.

For these groups, the Web represents an exceptional monitoring and communicating tool, giving them a highly visible media forum to spread their ideas, alert public opinion and media outlets, apply pressure on policymakers, and mobilize public support for their efforts.

The Internet is a mass media tool that enables anyone to quickly access information on complex issues as they seek to better understand the ins and outs of a given subject. 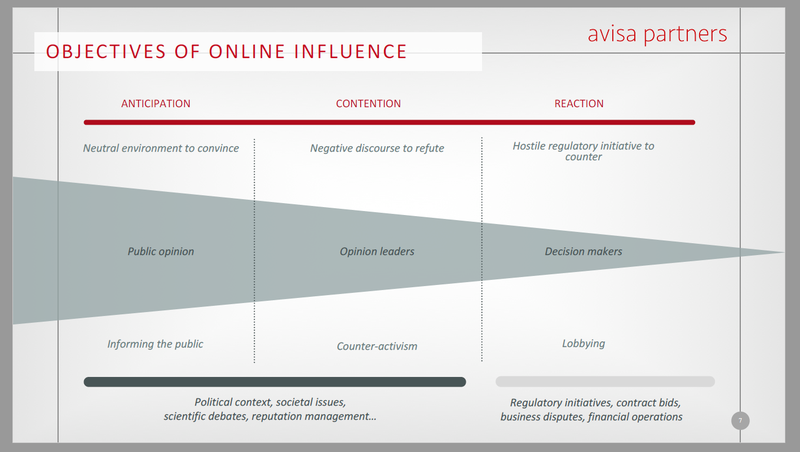 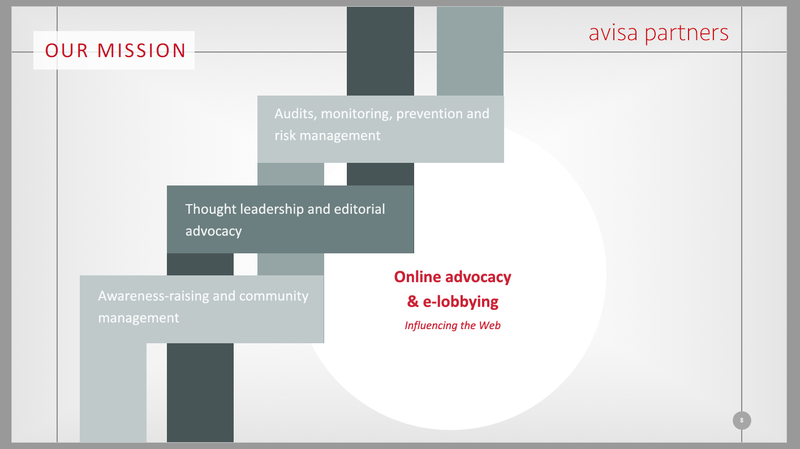 • Implement, evaluate and improve online capabilities for influence or mobilization

• Undertake qualitative, sector-based monitoring on targeted Webrelated issues in an international context (drawing on internal capabilities in English, French, Chinese, Russian and Arabic) with a focus on deciphering accumulated information in light of local cultural factors and the online landscape

• Organise a dense network of content by modifying the form, angles and arguments according to the target platforms/audience

• Frame the public debate around specific ideas and arguments

• Disseminate ideas and mobilise support through phone and e-mail campaigning

Our firm accompanies large companies, international organisations and governments in the deployment of online communication strategies across a diverse set of sectors and thematic areas: 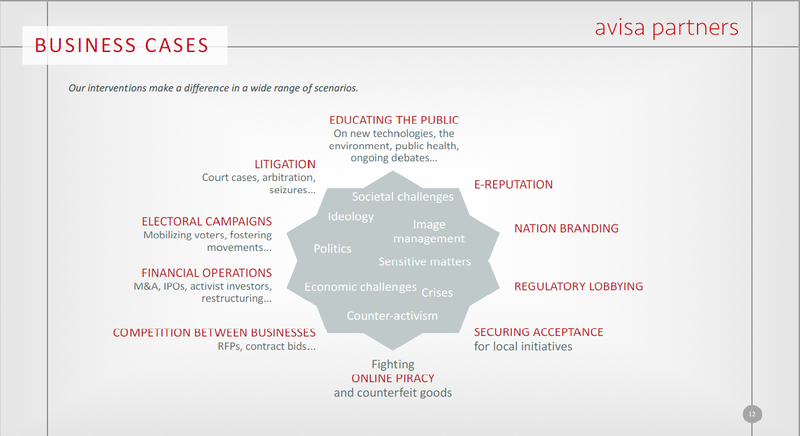 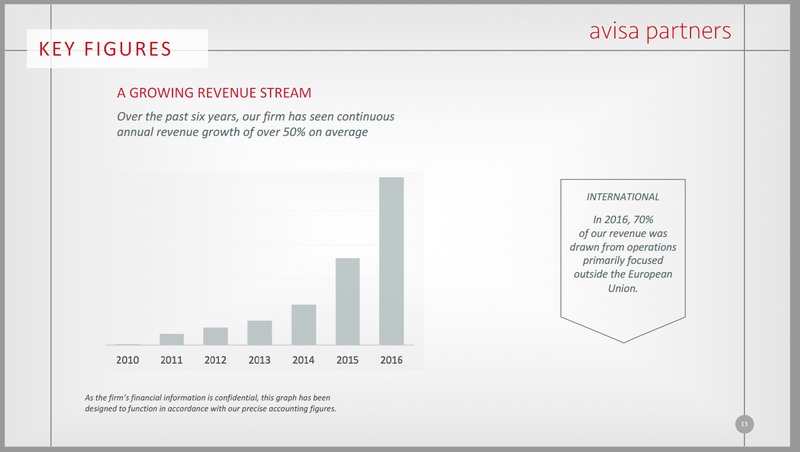 Matthieu Creux is an expert in online influence and mobilisation. After his studies at Sciences Po Paris, he began his career as a public affairs consultant with Euro RSCG (Havas Worldwide) before moving to Ernst & Young. Matthieu Creux has participated in every French general election since 2006, notably working as an advisor to the French Minister for Higher Education between 2007 and 2009, where he was in charge of online strategies. He has also worked for a number of foreign governments and large corporate groups on online activism and counter-activism issues.

Arnaud Dassier is a French IT entrepreneur. After a stint with the French Ministry of the Economy, Finance and Industry, in 1998 he founded one of the first Web-consulting agencies in France. For twelve years Arnaud has advised many large companies, organisations and public figures on their digital strategies. He has been a consultant and service provider for the Web campaigns of Jacques Chirac (2002), the UMP (2005-2007) and Nicholas Sarkozy (2007) before selling his agency in 2008. Since, Arnaud has worked in e-marketing and mobilisation in France and abroad.

Antoine Violet-Surcouf joined Avisa Partners as Managing Director after serving as head of ADIT’s digital strategies department for 11 years. He has authored numerous works of reference, including Cyberlobbying: the new logic of influence (2013) as well as the chapter on communications and influence in the Economic Intelligence Manual (2012). Antoine serves as President of the Alumni Association of the Economic Warfare School in Paris and is a regular participant in conferences on influence and digital public affairs. He has a particular expertise in complex monitoring operations and in countering online counterfeiting (including of pharmaceuticals, luxury goods, and sports betting).

Jérôme Yomtov served as Managing Director of Numéricable-SFR from 2009 to 2016. He was previously the Operations Manager for markets and competition at Arcep (France’s regulatory authority for electronic communications), the technical advisor to the Ministry of the Economy, Finances, and Industry, and an investment banker with HSBC. In his role with Avisa Partners, he works primarily on issues of business competition, regulation, and local authorities. Jérôme is a graduate of the Paris School of Telecommunications (Telecom ParisTech).

ABOUT OUR STRATEGIC COMMITTEE

Avisa Partners’ strategic committee brings together leading figures in the sector to work with our partners in developing the firm’s international presence. Members of the strategic committee may contribute their industry expertise on behalf of our clients.

Bernard Attali is the former President of Air France and currently a senior advisor to TPG Capital and Bank of America Merrill Lynch. He began his career advising France’s Court of Audit and was head of France’s Land Planning Delegation before leading GAN insurance group and Air France. He also served as Vice-Chairman of Deutsche Bank Europe Investment Banking. Bernard has been on the board of several companies including the SNCF, CIC, BNP, Société Générale, Méridien Hotels, Air Inter, La Poste, Sabena, EuroTunnel, Numericable-SFR and Baccarat. Bernard Attali is Honorary President of Air France, Commander of the Légion d’honneur and a graduate of ENA.

Eric Besson served as France’s Minister of Industry, Energy and the Digital Economy from 2010-2012 and Minister of Immigration, Integration and National Identity from 2009-2010. He served as State Secretary for Prospectives and Evaluating Public Policies from 2007-2009 and sat in France’s National Assembly from 1997-2007.

Jean-Louis Georgelin Ancien was personal chief of staff to President Jacques Chirac from 2002-2006 and subsequently Chief of the Defence Staff from 2006-2010. He served as the Great Chancellor of the Légion d’honneur from 2010-2016 as well as Chancellor of the National Order of Merit.

Christian Bechon served as Chief of Staff in the Ministry of the Civil Service from 1993- 1995, the Ministry of Health, and subsequently the Ministry of Industry from 2002-2004. He was Secretary-General of the Strategic Council for Health Industries (CSIS), the Institute for Nuclear Protection and Safety (IPSN) and the National Center for Space Studies (CNES). Since 2006, he has been CEO of LFB, a biopharmaceutical group specialising in plasma medicine and protein production.

Australia’s Lynton Crosby is one of the most prominent international political consultants. He has managed numerous electoral campaigns, notably those of David Cameron and Boris Johnson in the United Kingdom. He was knighted by Queen Elizabeth II in 2016.

Aron Shaviv is a leading international political strategist who has helped 14 heads of State win elections, including (past and present) Presidents and Prime Ministers of Israel, Thailand, Cambodia, Poland, Romania, Kenya, Congo, Bulgaria, Cyprus, Serbia and the European Commission. Most notably, Shaviv served as Campaign Manager for Israeli Prime Minister Benjamin Netanyahu, and has been widely credited for engineering his surprise landslide victory.

Joe Trippi is a pioneering Democratic political strategist in the United States and consultant in emerging technologies. He has served on campaign teams in numerous American elections, working on presidential campaigns and Democratic Party primaries for candidates including Ted Kennedy, Walter Mondale, Gary Hart, Dick Gephardt, Jerry Brown, Howard Dean and John Edwards. As Howard Dean’s National Campaign Manager in 2004, he was one of the first to leverage the Internet as a tool to rally party members and supporters around a candidate and as a campaign fundraising mechanism. His methods have been replicated by dozens of candidates in elections all over the planet.

An attorney recognised by the Paris Bar, Ardavan Amir-Aslani represents the interests of multiple governments around the world and takes part in international deliberations at the highest level. His work primarily concerns Western business interests seeking to launch or to expand their presence in the Middle East. 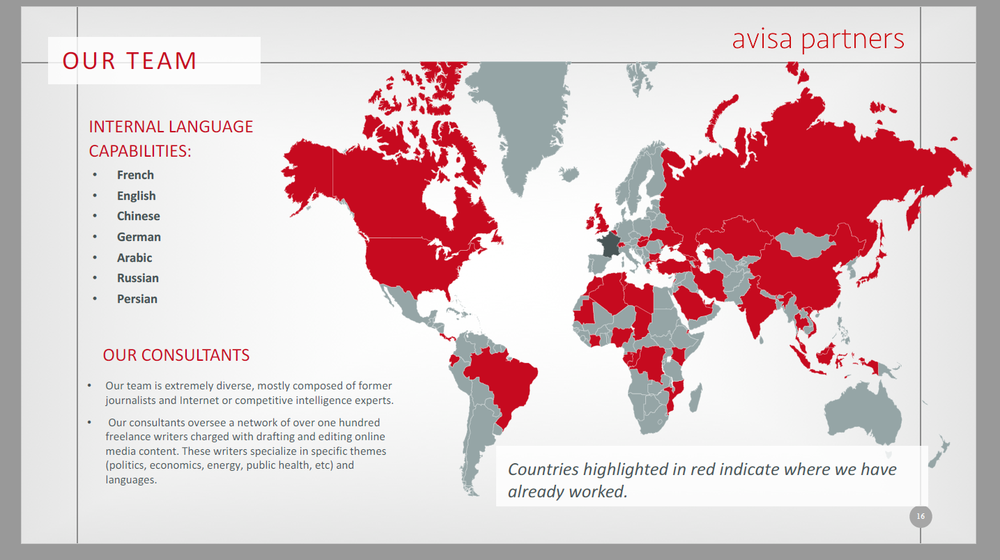