Paix et Liberté (Peace and Liberty) was a French anti-communist movement (1951-1956) during the Cold War. With covert CIA funding, it was able to print and distribute millions of street posters.

In response to the pro-communist World Peace Council's Stockholm appeal, Jean-Paul David, deputy mayor of Mantes and secretary general of the right-wing RGR, created the organization "Peace and Freedom" in 1951. The goal he wanted to achieve was: to respond to the propaganda disseminated by the French Communist Party to the French. This propaganda, according to him run from Moscow, made peace a central axis of international communist propaganda in order, notes the historian Bernard Ludwig to ""divide" and "immobilize" the non-communist world, to eventually establish a pax sovietica”.

Paix et Liberté intended to highlight through dramatic posters the warlike character of the communist bloc, to “unmask” it and denounce the fact that it was hiding this behind false pacifist propaganda instrumentalizing the human aspiration for peace.

The propaganda organization had a considerable contribution of American funds. “Peace and Freedom” was one of the organizations of the rapidly expanding “anti-communist apparatus” of front organizations during the Cold War.

The organization obtained the support of the prime minister René Pleven, as well as many politicians of the time. However, the effort stopped in 1956 with the Mendes government.

As early as 1951, there was a network of anti-communist Peace and Freedom associations in Europe, grouped together in the European Peace and Freedom Committee: in West Germany the People's League for Peace and Freedom (Volksbund für Frieden und Freiheit or VFF), in Italy Pace e Libertà, in the Netherlands Vrede in Vrijheid and in Belgium the comité Paix et Liberté. Also Denmark, South-Vietnam, Greece, Turkey, Switzerland, Australia, Great Britain joined the movement.[1]

"Paix et Liberté" published, distributed and plastered up hundreds of thousands of posters in France in the 1950s, an operation requiring significant funds. These posters, with catchy vignettes, denounced the Stalinist regime and Communist propaganda, but also targeted the [[PCF]French Communist Party]] and its leaders, and presented Maurice Thorez and Jacques Duclos as agents in the service of the USSR.[2]

Jean-Paul David also used the radio for the effort, with his program Les chats au coin du feu, inaugurated on September 22, 1951. He had visited the United States on several occasions, where he had received the warmest welcome from the highest personalities, meeting at length with Vice President Nixon.

Thus in 1951, "La colombe qui fait BOUM" ("The pigeon that explodes") (300,000 copies), the first of a long series (on average 3 per month between 1951 and 1956) parodied the poster of Picasso (the dove of peace) that had been chosen for the World Congress of Partisans of Peace held in Paris in April 1949. In this image, the dove became a Soviet tank.

In reference to the Stockholm appeal, the poster “The Stockholm Shovel” is produced, which digs the graves of Eastern European countries. 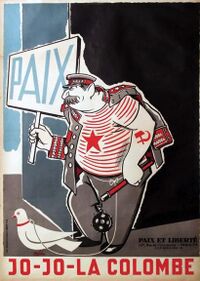 Another famous poster entitled "Jojo the dove" represented Joseph Stalin at a street corner, brandishing a "Peace" sign and a dove on a leash, holding a sign in the other hand.

More constructive, other posters put forward the ideal of a united, strong and prosperous Europe. They aimed to defend the project of a European unity which would be carried out against Bolshevism.