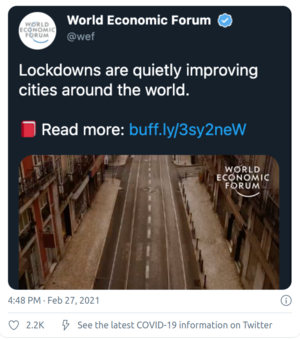 In early 2020, many nation states introduced unprecedented legal restrictions on freedom of movement, termed a "COVID lockdown", because it was nominally as a response to COVID-19. Officially only intended to last matter of weeks, in most nations they stretched into months, and were repeated. While they had unprecedented effects on society, as of early 2021, evidence that they impacted the spread of Covid-19 significantly is remarkably thin. 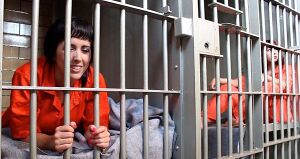 Indicating who thought out this strategy, the word 'lockdown' comes from the US prison system, where it means that all prisoners will be locked in their cells[1]

Apart from a brief attempt in Mexico in 2009[2], which quickly abandoned it, lockdowns have never been attempted as a disease-reducing strategy before[citation needed], which makes it remarkable that it was chosen as a strategy for all 8 billion people in the world, untried on a smaller scale.

The first lockdown was in China, after a declared COVID-19 outbreak in Wuhan, when 100 million were locked in their homes. The tendency accelerated after the 11 March official declaration by the WHO of the COVID Pandemic and the vast majority of nation states followed his policy.

The presumption was that this would prevent health systems from being overloaded, an event which never happened on a national level. Whether such policies have actually had much impact on the spread of the virus is debatable.[3]

Over the Summer of 2020, as awareness grew that COVID-19's IFR was nowhere near the 3.4% initially announced by Dr. Tedros, lockdowns were relaxed either de jure or de facto and increasing attention was paid to other motives behind the global lockdown, such as social engineering. In Autumn 2020, COVID testing was massively increased, the number of cases detected also increased, sparking a second wave of lockdowns in Europe.

The logic of the lockdown was presented in Thomas Pueyo's The Hammer and the Dance. He summarised his 19 March 2020 piece that "Strong coronavirus measures today should only last a few weeks, there shouldn’t be a big peak of infections afterwards, and it can all be done for a reasonable cost to society, saving millions of lives along the way. If we don’t take these measures, tens of millions will be infected, many will die, along with anybody else that requires intensive care, because the healthcare system will have collapsed."[4]

Many nation states have been repeatedly renewing legal restrictions introduced as "temporary" measures. Moreover, comparison with nation-states (most notably Sweden) which have not had them shows little clear benefit as far as stemming Covid infection. By late April, as more tests were carried out, various studies were suggesting that the case fatality rate was much lower that the "3.4%" announced by the WHO Director general, perhaps an order of magnitude lower, or even more, and so has been eclipsed by the economic and social disruption due to the lockdown measures themselves. By early May most mainstream media outlets have started to speculate on a coming second wave of the coronavirus in different countries.[5][6]

The website Just Facts, whose reporting is at times picked up by mainstream media,[7] reported in May 2020: "anxiety created by reactions to Covid-19—such as stay-at-home orders, business shutdowns, media exaggerations, and legitimate concerns about the virus—will destroy at least seven times more years of human life than can possibly be saved by lockdowns to control the spread of the disease."[8]

In cooperation with the Global Business Network the simulation of futurologist Peter Schwartz, "a world of tighter top-down government control and more authoritarian leadership, with limited innovation and growing citizen pushback" is described as Lock Step.[9]

"In order to protect themselves from the spread of increasingly global problems — from pandemics and transnational terrorism to environmental crises and rising poverty — leaders around the world took a firmer grip on power." [10] The firmer grip on power is reflected in the other scenarios as well, in a mix of soft power and hard power techniques.

The official narrative about the COVID lockdowns has changed over time. The initial claim was that they were needed to prevent a heavy loss of life by "flattening the curve" and preventing health systems from being overloaded by a huge spike in critically ill patients. This point contradicts the WHO's previous guidance in this area, but was adopted almost worldwide, with only a few countries resistsing. Several doctors have claimed that the "social distancing" is a conter-productive strategy that prolongs and deepens the risks to life.[11]

The extended lockdown with reduced sunlight exposure, exercise and social live, in combination with an increase in malnutrition especially in poor countries,[12] will have weakened the immune systems in many people globally, leading to additional illnesses of all kinds.

“Anywhere you see the phrase, "the New Normal" – you should reject it. It's based on fraudulent premise that #COVID19 is somehow fundamentally much greater threat than other infectious diseases, when it's not. Anyone pushing this should be confronted and publicly admonished.”
(19 May 2020)  [13]

A video interview (48:32) (2020-12-29) featuring Catherine Austin Fitts (for the Planet Lockdown documentary) clearly explains a greater global context of the ruling class' purpose for the entire plandemic lockdown and chaos scam, tying this "new normal" to their economic Great Reset for their tyrannical technocracy and transhumanist plans known as Agenda 21 / Agenda 2030. Most startling are the deliberate paths of destruction caused by the 2020 summer BLM / George Floyd riots to steal real estate within the Federal Reserve's "Opportunity Zones" established in 2018 (explained @ 28:38+). 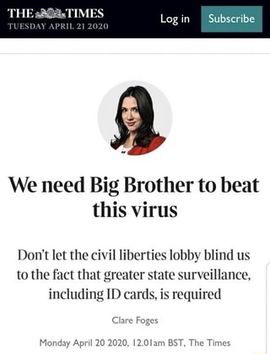 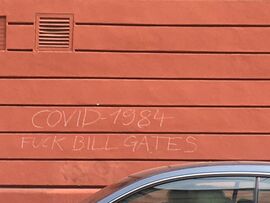 Many national governments introduced "temporary" legislation eponymously connected to the virus. In the UK, on 19 March 2020, the government announced that "COVID-19 is no longer considered to be a high consequence infectious disease".[14] On 23 March the 329-page "The Coronavirus Bill" was introduced and by 25 March it had become law. Silkie Carlo called it "the greatest loss of liberty in our history".[15]

The small group with foreknowledge of the lockdown could predict that the economy would crash and so cash out, selling their holdings and using the futures market to profit from the event. In this sense, the event can be compared to the 2008 Market Crash. On 26 March 2020, some 3.3 million US citizens were out of work and seeking financial help from the government,[16] a number that had doubled by 2 April.[17]

Since the general restrictions are in place, the free movement of seasonal workers for the harvest is impossible. It has been reported that this is threatening the fruit and vegetable output in Europe,[18] the United States[19] and Australia[20] for 2020 season. The German government, after being pressured to rethink its position,[21] lifted the restrictions for seasonal workers partially. The crisis coincides with the beginning of a period of reduced sun activity that may last several decades.[22] Reports about approaching shortages did continues throughout the year 2020.[23]

A 2015 simulation by the Big Agriculture corporation Cargill predicted up to 400 % increase in food prices by 2030; it discussed an upcoming carbon and meat tax.[24][25]

Some nation-states refused to severely curtail freedom of movement in response to the virus.

Sweden attracted criticism as a European holdout, resisting strong legal sanctions of other European nations, causing disquiet among (locked down) Danes. It was widely criticized by the commercially-controlled media for this until around August, by which point the pandemic was effectively over in Sweden.

The harsh lockdown that has been put in place in the country from August 2020 on, which complicates travel, as a result prevents farmers from being able to tend to their lifestock[29] and people from getting necessary medical care. Nine News Australia reported on October 20, 2020 that four newborns died because they were prevented to from getting life saving heart surgery.[30][31]

Luiz Henrique Mandetta was sacked in April 2020 after publicly opposing the Lockdown policies in force in Brazil.[32]

The French curfew started in October of 2020 was reported by the government itself to "have no effect whatsoever" on the 27th of January 2021. The French had extended the curfew 4 months later to a 6PM to 6AM curfew. Prime Minister Cantex (who silenced[34] doctors by law one month earlier) was believed by TV-sources to have publicly critiqued the curfew to avoid "Dutch situations" referencing the massive Dutch riots in the last weeks of January following their first curfew.[35] Cantex failed to mention the French had been rioting for weeks on three separate occasions already (with at least one death confirmed after an assault in public transport)[36], seemingly paving the way for a longer strategy on tension as Emnanuel Macron was reported to even enact a more severe lockdown.[37]

France even implemented a series of regional weekend lockdowns in cities like Nice, Cannes, and Dunkirk on the 24th of February 2021.[38]

The Dutch refused to order local lockdowns or masks early on and prohibited elderly homes from being tested causing hundreds of deaths among elderly, which caused those death rates to let the government gain a majority of public support for the lockdown. The court of The Hague ruled that the curfew should be lifted immediately on the 16th of February, citing the government of Mark Rutte "continuously talked about the implementation, which proved the urgent need to implement with a law likened to war-time measurements - especially without a parliamentary vote through both chambers - was deemed a constitutional violation of the Dutch people's privacy"[39]. The decision was suspended 45 minutes before the end of the curfew in an expedited appeal after the court denied the tense and seemingly nervous judge processing the appeal to be judicially disqualified. 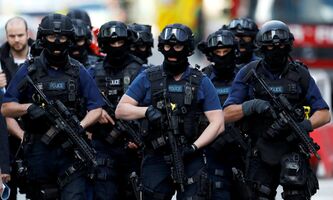 The US was enforced, according to Donald Trump, after two unnamed people cam into his office and told him that millions would die if he did not order a lockdown.[40] On 26 March 2020, Cass Sunstein wrote in Bloomberg that "on the basis of current knowledge, extensive precautions, not ending soon, are amply justified by the most hard-headed forms of analysis that we have."[41] The White House Coronavirus Task Force includes two Bilderbergers.[42]