“People in the UK widely believed that the pseudopandemic was real, not because the scientific or statistical evidence was clear but because the government spent billions with PR firms to run “hard-hitting” media campaigns designed to convince them of it.”
Iain Davis (16 August 2022)  [1]
Emphasis in original

COVID-19 has caused panic, termed "coronamania"[2] which has been helpful in facilitating the passage of COVID-19/Legislation. One of the primary factors has been the case fatality rate, which was initially overestimated due to the large number of unreported cases. After dissenting voices emerged to question the official figures, unprecedented censorship was instituted, especially on social media, which amplified fear of the virus and may have slowed the discovery of its relatively low case fatality rate.

COVID panic began in January 2020, as reports of the virus emerged from China, including videos of people being forcibly removed from their homes, and reports of people dropped dead in the streets. 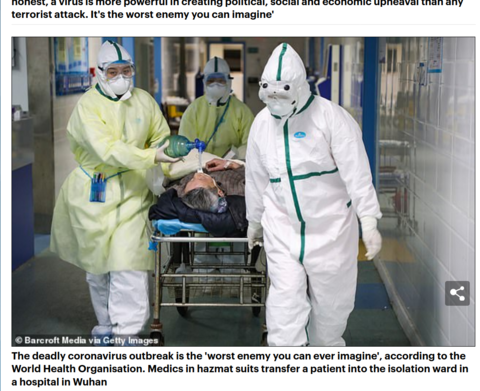 During February 2020, governments outside of China gradually acknowledged that COVID-19 was spreading. Preparation for the virus was scant. Individuals engaged in panic buying of supplies such as toilet paper.

A report in The Independent, while noting the importance of "keeping the threat in perspective", makes interesting use of red text for emphasis.

In early 2020, the media's implicit assumption was that the virus remained confined to China.

“[T]here is a process, being fed by mainstream media accounts and genuine panic in populations unclear what the real dangers are, that has alarming implications for the post-pandemic future.... A relevant question is whether certain bad actors, and there are some in this world, are opportunistically using the widespread fears around the COVID-19 to advance an agenda of “lock step” top down social control, one that would include stark limits on travel, perhaps replacing of cash by “sanitary” electronic cash, mandatory vaccination even though the long term side effects are not proven safe, unlimited surveillance and the curtailing of personal freedoms such as political protests on the excuse it will allow “identification of people who refuse to be tested or vaccinated,” and countless other restrictions. Much of the Rockefeller 2010 scenario is already evident. Fear is never a good guide to sound reason.”
F. William Engdahl (10 March 2020)  [4]
Emphasis in original

WHO Director-General Tedros Adhanom Ghebreyesus' announcement on 3 March 2020 that "Globally, about 3.4% of reported COVID-19 cases have died"[5] was widely reported. Although several media outlets suggested this may have been an overestimate - and Donald Trump told Fox News he had a “hunch” that the actual mortality rate was likely <1%[6], the revised case fatality rate was not widely reported on in following months. 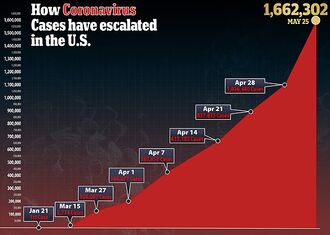 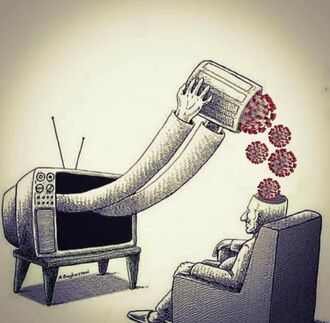 hCommercially-controlled media and official institutions have generally tended to maximise the possible dangers of COVID-19. "Since the first reported UK Covid-19 case, there has been non-stop media coverage propagandising the numbers of cases and deaths, and its threat."[7] Non-representative tragedies were featured, while sober reflections on the actual threat level presented by the virus were few and far between.

Ventilators are expensive equipment which mechanically carry out the work of the lungs. They were portrayed as life saving equipment in short supply, a part of the argument for extreme social isolation in an effort to "flatten the curve" by slowing the virus' spread. Early critics of the use of ventilators were classed as "fake news" and subjected to COVID censorship.

Shiraz Maher, a "terror expert" who attended the 2015 Bilderberg, reported in March 2020 that he had a tough time shaking COVID-19 and commented that "It has made me feel more intensely ill than I've ever been in my life."[8]

On the 7 March 2020, before widespread introduction of COVID lockdown measures, Craig Murray published Document:Momento Mori – Unpopular Thoughts on Corona Virus which referred to the "mass hysteria around the current coronavirus".

"Hysteria is infectious. We are working ourselves up into a lather in which we exaggerate the threat and stop asking ourselves whether the cure may be worse than the disease."

Worldwide specialist from the health profession are voicing their concerns about the response that the governments of their countries have taken.[10]

The situation in Germany as recorded by the RKI at the end of July 2020.

Dr. med. Claus Köhnlein from Kiel: "I am a clinician and I don't really see a new disease on the horizon. If you were to put away the test, then live would be as before, then we wold not see an increase in mortality or abundance of ill patients. There is nothing going on at the moment. (20 March 2020).[11]

Klaus Püschel, chief of forensic medicine for the city of Hamburg stated:[12] "This virus influences our lives in a completely excessive way. It is out of all proportion to the danger posed by the virus. And the astronomical economic damage now being done is not commensurate with the danger posed by the virus. I'm convinced that the Corona mortality rate will not even be noticeable as a peak within the annual mortality." (6 April 2020)[13]

Maurice de Hond has presented pages of research about COVID-19. He suggests that the virus is generally not as contagious as presented, except in the case of "super spreading events". Having analysed virus spread and weather climatic data, in April 2020 he highlighted the danger of large indoor gatherings with a particular combination of temperature and humidity that allow the virus can spread very fast. He argues that the COVID lockdown measures are a blunt instrument and that more research is needed on environmental conditions. This idea has been widely repeated since his publication, for example in the New York Times in June 2020.[14]

Johan Giesecke, adviser to the Swedish Government and the director general of the WHO in an interviews says, that the projected numbers by the Imperial college paper were dramatically overestimated and he never has seen a such an impact by a paper that was never peer-reviewed. Better policy would have been to protect the old and the frail only. Social distancing and closures are not methods that do have much evidence base for success. (17 April 2020)[15]

Dr. Annie Bukacek, founder of Hosanna Health Care in Kalispell - Montana:[16] "Few people know how much individual power and leeway is given to the physician coroner or medical examiner signing the death certificate. How do I know this? I’ve been filling out death certificates for over 30 years. More often than we want to admit, we don’t know with certainty the cause of death when we fill out death certificates. (…) When it comes to COVID-19, there’s the additional data skewer that there is no universal definition of COVID-19 death. The Center for Disease Control, updated from yesterday April 4th, still states that mortality data includes both confirmed and presumptive positive cases of COVID-19. (…) The CDC counts both true COVID-19 cases and speculative guesses of COVID-19 the same, they call it death by COVID-19. They automatically overestimate the real death numbers by their own admission. (…) The real number of COVID-19 deaths are not what most people are told and what they then think." [17][18] (6 April 2020)

In July 2020 White House Chief of Staff, Mark Meadows, claimed that 99%of COVID-19 infections were "totally harmless".[19][20] This was widely criticised by commercially-controlled media including the Guardian[21] and MSN.[22] FDA commissioner, Stephen Hahn, had no comment on the matter.[23][24]

Various people have overdosed on supposedly prophylactic drugs in an effort to prevent or treat the disease or engaged in other risky or fatal behaviour out of panic. 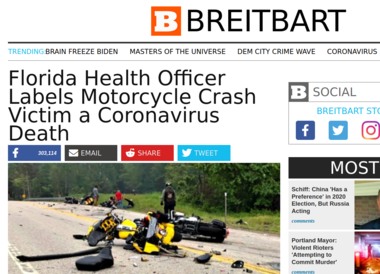 The CDC director, Robert Redfield admitted in July 2020 that medical facilties had a "perverse incentive" to increase what were termed "COVID deaths". This term included people who died with rather than from the disease, a distinction which commercially-controlled media generally failed to clarify. "COVID deaths" included not only patients whose preexisting conditions had worsened due to COVID, but also those who died from falls[25] gunshot, traffic accidents[26][27] or by lightning strike.[28]