Roberto Burioni is an Italian virologist and academic Burioni has risen to fame in Italy for his strong stance against the antivaccination movement and has been described as the "most famous virologist in Italy"[1]. He was the strongest proponent of the lockdown measures during the Covid-19 situation in the first half of 2020.

After graduating from the Liceo Classico Raffaello, Urbino, Italy, he received his Medical Degree from the Università Cattolica del Sacro Cuore Medical School in Rome and a Ph.D. in Microbiological Sciences from the University of Genoa.

Burioni attended the Center for Disease Control in Atlanta, Georgia and the Wistar Institute of the University of Pennsylvania as a visiting student in the laboratory of Dr. Hilary Koprowski and Carlo Maria Croce. He has been a visiting scientist at both the Center for Molecular Genetics at the University of California, San Diego, and at the Scripps Research Institute.

He is Professor of Microbiology and Virology at the Vita-Salute San Raffaele University, Milan where he runs a lab developing human monoclonal antibodies against human infectious agents, the study of pathogen-host interplay, and the use of molecular tools in the early diagnosis of infectious diseases.

Burioni is an active campaigner against the antivaccination movement and rose to fame in Italy after an appearance on the TV talk show "Virus" in 2016, on the national TV channel Rai 2. Since then he has developed a large following on social media with almost 480,000 followers on Facebook and over 114,000 followers on Twitter.

In 2017 he authored the book "Il vaccino non è un'opinione: Le vaccinazioni spiegate a chi proprio non le vuole capire" ("The vaccine is not an opinion: Vaccinations, explained to those who just do not want to understand them").

In 2018 Burioni, along with several colleagues, created the website Medical Facts[2]. Articles on the site are written by medical scientists, doctors and other health professionals with the intent of promoting news and advice on a range of health issues.

In January 2019 Burioni launched a Pact for Science, calling on all Italian political parties to sign on and pledge to follow five points:

Burioni has been the most vocal proponent in Italy of lockdowns and other draconian measures.

In early February 2020, Burioni stated that the coronavirus was far more dangerous than the common flu and that due to its highly contagious nature, it was important not to underestimate it, but rather deal with it decisively[3].

He further noted the importance of diagnosing cases as quickly as possible and isolating people who were or might get infected.

Burioni has fully backed the measures taken by the Italian government to halt the spread of COVID-19, calling it an "indispensable measure"[4]. In response to the Italian government's plans to relax lockdown measures from May 4, Burioni said that anyone leaving their homes should be required to wear a mask and have some form of contact tracing. He further suggested that anyone found to have the virus should be isolated at a hotel or other facility rather than their home, warning that without these measures the virus could spread anew, resulting in having to start the lockdown all over again.

Big consultancy fees during the lockdown 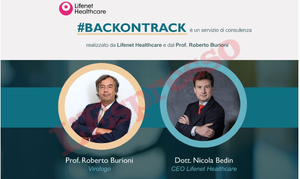 During the lockdown, Buroni made huge consultancy fees for "Back on track", "a consultancy service, focused on outpatient and hospital activities" founded in 2018 by Nicola Bedin and Lifenet healthcare.[5]

The partnership between Bedin and Burioni was born during the arrival of Covid 19. It offers Italian companies a package of "indications and guidelines to resume business operations in safety with respect to the coronavirus". Lifenet's business (controlled by Bedin through another company, Invin, of which it owns 70% of the shares) boomed during the lockdown: the group has signed contracts worth hundreds of thousands of euros with companies and top brands in May-June 2020.

The slides for potential buyers explained that "Back on track" responds to the need of Italian companies "to identify the best guidelines to strengthen the safety of their employees, having regard to Covid-19 risk, also in light of the obligations of the employer of work". The consultancy service guaranteed protection against various potential risks, and the "added value" consists of prevention strategies, "new rules to maximize the effectiveness of the productive return", and suggestions for keeping intact "the corporate reputation, which it must be safeguarded and promoted with professionalism and competence."

What Bedin, Buroni and the other experts actually did, was make inspections, place information panels and stickers in offices and factories to signal distancing, talked to company doctors, offered staff training, psychological assistance, and a valuable "scientific validation".

The "Back on track" fees vary depending on the service and the scientific consultant chosen by the end customer (in addition to Burioni, Bedin offers customers other "expert virologists" a little less popular). TIM has signed a contract with Lifenet for around € 200,000, while Snam, a public gas giant, paid €150,000 (An additional indication of corruption is that Nicola Bedin is due to become the next CEO of Snam in a few months).It has also consulted for Marelli, a multinational company specialized in products and systems for the automotive industry, Ferrari (€33,000), and the luxury brand Gucci.[6]

Burioni announced that he would take a media break until October 2020, possibly in connection to the consultancy revelations.