"Overpopulation" is a word used to suggest that there are too many humans on earth, or too many in certain areas. It is typically used by people in countries with relatively low populations that are high consumers of material goods. The term is also a replacement for the word "eugenics", which was discredited after the defeat of the Nazis in 1945.

The word "overpopulation", and a lot of the associated dogma and language conjures a simple frame of scarcity by sharing a fixed amount of things between too many people. To the extent that this overlooks a history and/or present of plunder by colonial powers (i.e. "developed" nation states) it is a form of victim blaming: people here are poor because there are too many of them, not because the country has been looted by foreigners determined to get more resources which they themselves deplete at an unjustifiable high rate.

"People are the only vital raw material for building human societies. Without people, the most elegant architectures and the most advanced infrastructures are nothing but archeological marvels waiting to be recognized. With people, a handful of sands in desolate landscapes could turn into a flourishing civilization. This simple most essential fact did not escape the attention of, nor was it dismissed so callously by any people of any generation bar those of our modern era. Historically, if a society wished to thrive and prosper on social, cultural, economic, and scientific grounds, or any other human concerns, its most rudimentary first step was to grow its population. A population that does not physically grow, stagnates and withers away. Along the same lines, if a society was deemed as an impediment to expansionists who coveted its lands and resources, the mechanism for the aggressor was rather simple: reduce that society’s population by killing as many of its people as possible if you are interested in a cross-sectional plunder. Kill or capture as many of its women of child-bearing age as possible to stop it from growing if you are determined to make your loot absolute."[1] 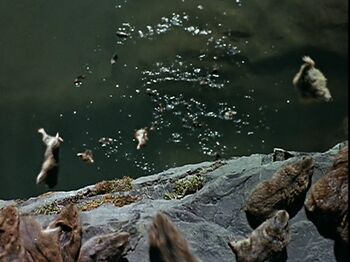 White Wilderness, a 1958 Disney "documentary" that misrepresented migration behavior of Lemmings and implied that due to "overpopulation" some animals will see to drown to help the situation.[2][3][4]

The Nobel Prize winner Frank Macfarlane Burnet, who once received a grant from the Rockefeller Foundation,[5] in 1947 secretly urged the Australian government to develop biological weapons for use against Indonesia and other overpopulated countries of South-East Asia, by targeting food crops and spreading infectious diseases.[6][7]

NSSM 200 from December 10, 1974, also called 'The Kissinger report', concluded that: "a far larger, high-level effort is needed [...] to bring population growth under control" and "although world population growth is widely recognized within the Government as a current danger of the highest magnitude calling for urgent measures, it does not rank high on the agendas of conversations with leaders of other nations".[8] 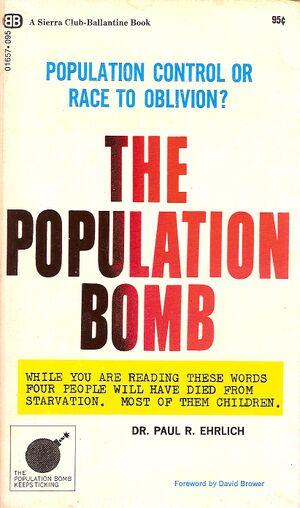 "The Population Bomb" an alarmist 1968 book by Paul R. Ehrlich that predicted worldwide famine and other major societal upheavals. It advocated immediate action to limit population growth and brought the idea of overpopulation to a wider audience.

Denise Horn of the Northeastern University in a 2012 paper analyses:[9]

"[...] the original intent of ‘population control’ was to protect US access to raw resources and maintain US global supremacy. US family policies did not first identify woman as the object to be controlled, but policies have changed such that women's bodies have become a symbolic representation of – and site of resistance to – the power relationships between the US and developing states. The change in the rhetoric – from population control to family planning, women's empowerment, environmental sustainability and human rights – does not mean the ‘rules’ enforced by the hegemon have changed so much as it indicates a process of identity formation occurring through the implementation of these rules.

The history of US family planning policies is a story of national security issues played out on women’s bodies, in the developing world and within the shifting discourses of women’s empowerment, environmental protection and resource control. US funding for family planning programs continues to inflame passions on both sides of the debate: family planning either represents an imperative of a woman’s right to reproductive choice or is in conflict with conservative values and the right to life. US domestic debates over abortion rights are played out on the international stage as successive administrations defend or weaken international family planning programs. These political and rhetorical positions, however, belie American foreign policy goals that have been in place since the 1960s and 1970s, when policy makers identified overpopulation as a serious threat to the world’s resources and American security concerns.

The 'Global 2000 Report to the President' from August 1, 1980 predicted: "The environment will have lost important life-supporting capabilities. By 2000, 40 percent of the forests still remaining in the LDC's in 1978 will have been razed. The atomspheric concentration of carbon dioxide will be nearly one-third higher than preindustrial levels. Soil erosion will have removed, on the average, several inches of soil from croplands allover the world. Desertification (including salinization) may have claimed a significant fraction of the world's rangeland and cropland. Over little more than two decades, 15-20 percent of the earth's total species of plants and animals will have become extinct -- a loss of at least 500,000 species" concluding "thus anyone with a present life expectancy of an additional 50 years could expect to see the world population reach 10 billion. The same rate of growth would produce a population of nearly 30 billion before the end of the twenty-first century. Here it must be emphasized that, unlike most of the Global 2000 Study projections, the population projections assume extensive policy changes and developments to reduce fertility rates".[10]

The Georgia Guidestones, a monument in Georgia whose financially wealthy erectors wanted to remain anonymous, propose a limit of 500,000,000 humans on the planet.

According to some archaeologists - fantasizing about rather exactly known ancient climate data - water supplies, plagues, climate and "civilization" might be correlated in the following ways:

“Overpopulation and the overreliance on irrigation was a major factor in making the Maya vulnerable to failure:

the trigger event of their collapse appears to have been a long drought beginning about 840 A.D. (communication of V. Scarborough, an archaelogist (sic!) from the University of Cincinnati [90]). Among many factors, such as war and plagues, that contributed to many of the collapses of ancient societies, there seem to be two main causes: too many people and too little fresh water. As a consequence, the civilization became vulnerable to environmental stress, for instance, a prolonged drought or a change in climate [90].

The societies themselves appear to have contributed to their own demise by encouraging growth of their population to levels that carried the seeds of their own decline through overexploitation of the land (communication of C. Scarre, an archaelogist (sic!) from the Cambridge University in England [90]). Similarly, the Akkadian empire in Mesopotamia, the Old Kingdom of Egypt, the Indus Valley civilization in India,

and early societies in Palestine, Greece, and Crete all collapsed in a catastrophic drought and cooling of the atmosphere between 2300 and 2200 B.C.”
Didier Sornette (2003)  [11]