The Great Reset was the name of the 50th meeting of the World Economic Forum, held in June 2020. Peter Koenig termed it in October 2020 “the antidote to 'democracy'. As it is envisaged, it seems to be a total corporate takeover of all aspects of life. Using a technocratic biosecurity state apparatus implement the changes, it will mean extensive restrictions on the physical environment around people, a forced digitization, and a loss of bodily autonomy (i.e a say in your own health decisions).” [1]

Build Back Better is a slogan associated with the policy.

The project aims to connect "key global governmental and business leaders" in "a historical moment to shape the system for the post-corona era"[2]. It envisages a "stakeholder capitalism" solution, where the big corporations become "trustees of society".

Noticeably left out of all these plans is any democratic participation, where people genuinely can decide over their own futures on a local level. The democratic process in the Great Reset is reduced to engagement with global governmental leaders and "stakeholders", i.e. self-appointed community leaders from NGOs, more often than not with positions dovetailing with the big corporations.

The forum launch also strongly hints at a reduction in material living standards for average citizens (but maybe not so much the owners of corporations or Prince Charles), especially in developed countries; "a change of lifestyles" to a green economy including pushing through a "rapid growth in digital" - as opposed to physical goods and services, like travel. The launch mentions "employment opportunities" and "opportunities for all" to "close the gaps in equality", but does not mention living standards.[3]

The Great Reset concept is heavily promoted by WEF Executive Chairman Klaus Schwab, who envisages a "comprehensive approach" to shape the future, integrating "all organizations and people with innovative ideas". Who these people and organizations are and what sort of ideas will be prominent, can be discerned from the speakers at the launch of the initiative: Kristalina Georgieva from the IMF, Brad Smith from Microsoft, Bernard Looney from British Petroleum and Prince Charles of Britain.[4] And the strategic partners which will help formulate the action plan, consist of a hundred of the most ruthless companies in the world.

Klaus Schwab, along with his co author Thierry Malleret, published a book entitled COVID-19: The Great Reset in July 2020. "It's not enough to change a few policies or address short-term issues, what we need is a change of mindset, of lifestyles, of business models," said Schwab.

In a 2019 op-ed, Schwab opined that the “shareholder capitalism,” embraced by most Western corporations, which holds that a corporation’s primary goal should be to maximize its profits, and the second model, of “state capitalism,” is no longer sufficient. He wrote that "Business leaders now have an incredible opportunity" which "positions private corporations as trustees of society".[5] The US Business Roundtable, America’s most influential business lobby group,[citation needed] announced in 2019 that it would formally embrace this "stakeholder capitalism".

Connected to the Great Reset is "The Fourth Industrial Revolution", a phrase introduced by Klaus Schwab, in a 2015 article published by Foreign Affairs[7].

This slogan has been used by many politicians across the world.

The whole program ties in with how Greta Thunberg, as a representative of "civil society", was given lots of attention at the 2019 and 2020 WEF summits, at which she stated that "our house is on fire", calling for "urgent action, stressing the need for 'real zero' emissions."[8]

Several "stakeholders" have pronounced to the WEF how they envisaged a Great Reset[9]:

Of course, these government officials, activists and influencers can’t impose a systemic change of this size on their own. Which is why they have already started to activate vast networks of left-wing activists from around the world, who will throughout 2021 demand changes in line with the Great Reset.

According to the World Economic Forum, its 2021 Davos summit will include thousands of members of the Global Shapers Community, youth activists located in 400 cities across the planet. 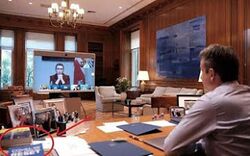 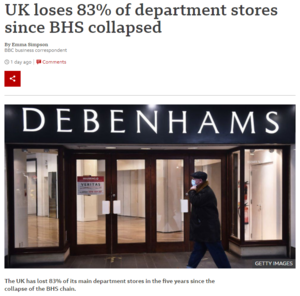 Since 2016, Britain has lost 83% of department stores. Amazon murdered the competition. Jeff Bezos has made a killing.

COVID-19 might have been designed to furnish a pretext for carrying out the great reset. The lockdowns caused innumerable small and medium business shutdowns while further consolidating ownership in a few hands. 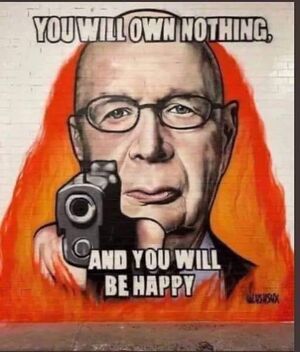 Ezra Levant and politicians Pierre Poilievre and Maxime Bernier called Justin Trudeau as the "world's most prominent defender" of this Great Reset.[17]